Growing up in Kenya and the UK, I had not encountered during my childhood anything made of buckwheat, the pyramid-shaped seeds of the buckwheat plant. So I was delighted to discover delicious buckwheat dishes later on my travels.

Soba noodles are a staple in Japan, served hot or cold, simply on their own with a tasty broth or dipping sauce, or combined with other foods like tempura. And while training at altitude in St Moritz, Switzerland, I discovered ‘pizzoccheri’ from over the border in northern Italy’s Valtellina region – flat, tagliatelle-like short noodles served with a hearty sauce of cheese, greens and cubed potatoes.

Buckwheat is highly nutritious, being rich in niacin, magnesium, manganese and phosphorous. It is a good source of carbohydrate and is gluten-free (despite its name, it is not related to wheat). So when I was training hard, buckwheat was one carbohydrate source that I made sure I ate frequently.

Flours are useful in all sorts of dishes, but one thing they are perfect for is pancakes! I decided to have a go at making small buckwheat pancakes that I could freeze and eat as pre-training snacks with a variety of toppings. During my research into buckwheat pancake recipes, of course it turned out that someone else had got there first!

France’s Brittany region is famous for its tasty ‘Galettes Bretonnes’, thin crispy buckwheat pancakes traditionally filled with ham, spinach, eggs and cheese, and folded into a neat little parcel with the filling peeping out.

Making pancakes with flour that contains no gluten can be a tricky business. My tip is to make sure your frying pan and oil are very hot, and leave the pancake to cook for plenty of time before attempting to flip it.

The grains or ‘groats’ of buckwheat make a delicious, comforting porridge, and can also be used in soups to give them substance and texture. For any athletes with gluten intolerances, buckwheat is a must!

Many supermarkets sell buckwheat flour now, as do most health food shops. If you’re lucky enough to ever find buckwheat flower honey, do buy some – it is dark, strongly aromatic and uniquely delicious. 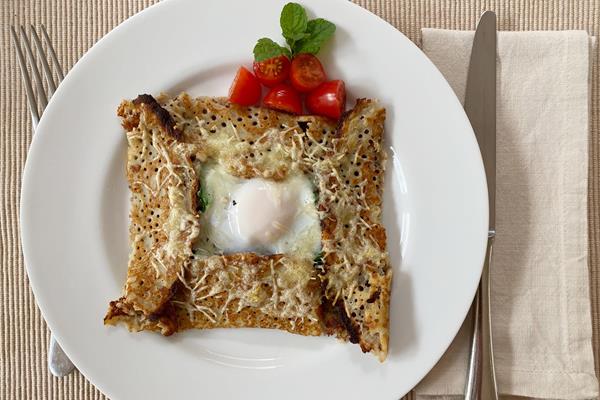 Method
• In a bowl with a lip or measuring jug, mix the flour, salt, egg and about half the milk into a thick paste. Add the remaining milk and oil or melted butter and mix well into a thin batter.

• Heat a large, flat frying pan with a little oil until it is really hot. Pour in some batter, swirl around to cover the bottom of the pan, and leave it to cook until crisp round the edges and all the runny batter has firmed up. Carefully flip to cook the other side. Remove to a large plate.

• Quickly wilt the spinach in the hot pan. Place the ham, then spinach, then raw egg and cheese in the centre, and fold in the pancake edges to make a square parcel with the filling just peeping out. Place under a hot grill for about 5 mins until the egg has cooked. 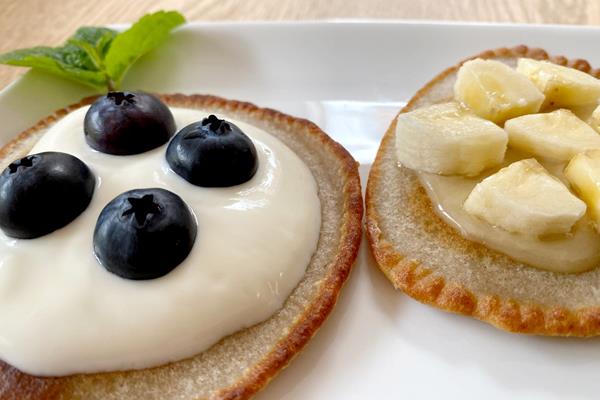 Ingredients
I use the recipe above but reduce the milk to 180ml and the oil or melted butter to 1 tablespoon. This will make a thick batter which is easier to handle and freeze.

Method
• As above, heat a large, flat frying pan with a little oil until it is very hot. Pour several small amounts of batter into the pan but don’t swirl them. Try to make sure they are not touching. They should be about 10cm in diameter. When they crisp up round the edges, flip them over to cook the other side.

• Remove on to some kitchen paper on a plate to allow them to cool and to remove any excess oil. When completely cold, place into a clean sealable clear plastic bag and freeze. When ready to eat, just microwave for 30-40 seconds.

Ring the changes with your favourite foods and see what you like best!