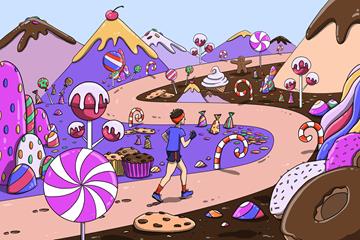 Don't be afraid of making a fitness-related pledge to yourself at the start of a new year. Set yourself a target, take the plunge and commit to it.

Resistance to the clean slate that is January 1st is futile. It doesn’t matter how much you scoff that the date ticking over on the calendar is meaningless, that resolutions are made to be broken, or that giving up all the treats in life in January is adding insult to an injurious month of abstinence and empty pockets. Somehow, it gets you every time.

Every year I get suckered in. Despite not actually having stopped running through December and Christmas, I nevertheless make rash promises that now everything changes: I’ll do more cross country running (unlikely) or spend more time doing strength and conditioning work in the gym (more plausible: in the cold grey English winter, being indoors has some appeal). Over my dead body will I give up cake, but I might aim for a slightly less regular intake. How long will it last? Probably until January 2nd. Did I mention how cold and grey it is in the UK winter?

January, though, does mean two things for many runners. Firstly, the New Year’s resolutions to try and REALLY commit this time come thick and fast – this time, you absolutely will crack that last run of Couch to 5k, or nail that parkrun PB. That means that January is a time many of us start searching out company. That’s one of the best resolutions you can make – google your local running club or group and brave your first appearance. And don’t be self-conscious or worried – I absolutely guarantee you will not be the only persons whose runs are somewhat overly-fuelled by festive sweets, the contents of chocolate advent calendars and Panettone.

Then for more seasoned runners – or indeed anyone who is aiming at a spring marathon – it’s the warning bell that proper training starts now. And my, that can seem daunting. Like any big goal – whether it’s your first 5k solo or a race you’ve entered – it suddenly looms large. In fact marathons loom so large they start casting a shadow across your whole life. And lest you think that’s just for novices, let me tell you that experience doesn’t make you blasé – I’ve done 13 marathons yet the moment I hit ‘enter’ for a new one, and it’s all down in black and white, the bottom temporarily falls out of my  stomach. Am I really going to be slogging out 20+ mile runs on the gloomy Sunday mornings of February and March?

And if I am, could someone remind me why, because I seem to have temporarily forgotten?

The trick with all running resolutions is to embrace the actual journey, not pine ahead for the destination. Coaches – in all sports, not just running – are fond of quoting the maxim that we must “focus on the process not the outcome” to such an extent that it’s become a cliché. That doesn’t mean it’s not true. And that doesn’t just mean simply committing to ‘do’ every run; it means actually celebrating them.

Every time you reach a new goal: the longest run you’ve ever done, the fastest time you’ve run round your normal park route, the most number of runs you’ve done in a week – pat yourself on the back and consider how far you’ve come, not how much further you might have to go.

It’s the mental process of the race itself played out over months instead of hours. At mile 10 of a marathon you can veer wildly in your head from “Hooray! 10 miles down!” to “Ohmygod that’s sixteen left and that’s ridiculously far I can’t do it”. Every time you go for a run you really didn’t feel like doing, you make that negative thinking a tiny bit easier to tune out.

In fact I’ve often thought that the ability to stop thinking – turn off the brain and just run – would be the single greatest improvement we can make. Hushing that mean little voice inside your head that nags and tempts: you can’t do this, it’s too hot, it's too cold, it’s too wet, it’s too far for you – is something we learn when we train, and is as important as the more physical process of training our lungs and muscles to run better or faster or further. If your head is reluctant but you overcome the doubts and get out the door, that’s a positive gain in training, whatever the actual run is like. And like the more physical side of training, if you keep doing that, you get better at it.

But of course, you should never overdo it. Give yourself a break, too, when you need it. Niggles need resting. Tired legs need recovery. And remember, just because you skipped a run or two – or a week or two – it doesn’t mean you’ve gone back to scratch. Just get out the door again.

Just don’t expect me to suddenly embrace the joys of cross country, and plunging through muddy fields on a freezing UK January morning.