Christian Coleman sped to a dominant 9.85 victory in the 100m at the Bislett Games in Oslo as the 2019 IAAF Diamond League resumed in the Norwegian capital on Thursday (13).

Quickest out of the blocks, the reigning Diamond League champion pulled away mid-race and was never threatened as he chipped 0.01 from the previous world lead he shared with compatriot Noah Lyles and Divine Oduduru of Nigeria. Given the evening chill that descended upon the sold out Bislett Stadium, Coleman was pleased.

“I’m pretty excited about it - it was good run and pretty good time,” said Coleman, who uses “pretty good” as a characterization of the third fastest time of his career.

“It wasn’t ideal conditions, but the crowd made it exciting and I came out for the victory. I executed better than in my last race.”

Coleman’s performance was one of six world leads on the night, the first coming courtesy of Selemon Barega in a 3000m contest that had the capacity crowd on its feet.

Uganda's Joshua Cheptegei did much of the leading, taking command just beyond the midway point, hoping to run the zing from the Ethiopian's legs. It wouldn't come to pass.

Tucked behind Kenyan Nicholas Kipkorir Kimeli, Barega maintained close contact in third over the first kilometre, then moved into second with 600 metres remaining. He then made his decisive move with just over half a lap to go to take the victory in 7:32.17, a lifetime best for the 19-year-old. Cheptegei held his position to finish second in 7:33.26 with Kimeli next in 7:34.85, personal bests for both.

Behind them, Henrik Ingebrigtsen captivated the crowd with the strong final lap of his own, moving from sixth with 500 metres left to race to fourth across the line, his 7:36.85 a new national record. The stadium erupted.

The evening-capping Dream Mile, the meeting’s signature event, didn’t witness a similar finish for Henrik’s youngest brother Jakob, the double European champion, who couldn’t manage better than sixth. Instead, it was Pole Marcin Lewandowski who emerged the winner in a blanket finish clocking a 3:52.34 world lead, 0.04 ahead of Kenyan Vincent Kibet. Ayanleh Souleiman was another step back, clocking 3.52.66 for third.

Norah Jeruto produced the biggest upset of the evening, taking the steeplechase in 9:03.71, a meeting record and another world lead to end world record holder Beatrice Chepkoech's unbeaten streak at seven.

Chepkoech, whose last loss came in Rome more than a year ago, took command 1300 metres into the race, with Jeruto shadowing closely. As the laps wore on, the order didn't change, with Jeruto running confidently, seeming waiting for the right moment to pounce. That came in the final 100 metres. As she was passed, Chepkoech didn't even try to respond, content with her eventual 9:04.30 seasons best.

Dafne Schippers continues to round into form, the Dutchwoman producing a convincing 22.56 run to collect her third 200m Oslo victory.

“I'm coming back from injury and I'm getting faster and faster, that's part of the plan - I just need more races." The two-time world champions races next on Sunday in Rabat.

Cystal Emmanuel of Canada was a distant second in 22.89. 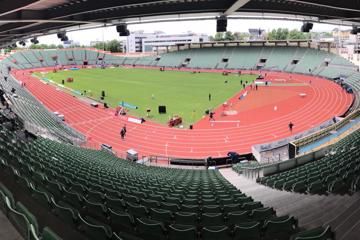 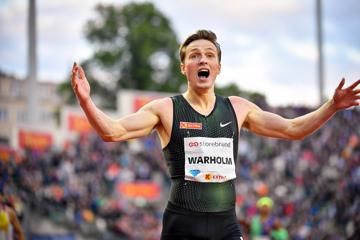