With one month to go until the Meeting de Paris, the line-up for the IAAF Diamond League meeting on 24 August is taking shape.

The men’s 200m, scheduled near the end of the programme, is set to be a test of strength between USA’s Noah Lyles and world champion Ramil Guliyev. Lyles won the 200m in Lausanne earlier this month in 19.50 to move to fourth on the world all-time list. Guliyev, meanwhile, is familiar with the Charléty Stadium as he won there in 2017 in 20.15, one month before going on to win the world title. Olympic bronze medallist Christophe Lemaitre will also be in the field.

The pole vault will be a duel between USA’s world champion Sam Kendricks and France’s world record-holder Renaud Lavillenie. Kendricks, who was victorious in Paris last year, has cleared 5.95m this season. Lavillenie, meanwhile, will be aiming to improve on his season’s best of 5.82m.

The women’s pole vault is also set to be a classic. Greece’s Katerina Stefanidi and USA’s Sandi Morris shared the podium at the 2016 Olympic Games and 2017 World Championships with Stefanidi coming out on top on both occasions. Morris, however, has the better PB (5.00m) and season’s best (4.82m).

In the high jump, Mutaz Essa Barshim will take on Gianmarco Tamberi for the first time this year. Barshim, the world champion, is gradually getting back into shape after a long spell of forced time-out due to an ankle operation. Tamberi, the 2016 world indoor champion, returned to good form earlier this year to win the European indoor title.

US duo Christian Taylor and Will Claye will clash in the triple jump. Taylor, the world and Olympic champion, is second on the world all-time list with his 18.21m leap from 2015, but Claye moved up to third on that list earlier this year with an 18.14m jump. In their latest duel, just seven centimetres separated the duo.

The women’s triple jump will also feature the two most dominant athletes in the event. World champion Yulimar Rojas has jumped a world-leading PB of 15.06m already this year and defeated her Colombian rival in Monaco, but Ibarguen beat Rojas in Lausanne and won in Oslo.

After having had his preparation hampered by fibrosis of the upper hamstrings, world 800m champion Pierre-Ambroise Bosse will be looking to make the most of a quick race to improve on his season’s best of 1:45.43.

Two familiar faces will feature in the women’s discus. Double world and Olympic champion Sandra Perkovic, winner in Paris in 2016 and 2018, has had a low-key start to the season, but hopes to rediscover her best form in Paris. After giving birth to her second child last year, France’s Mélina Robert-Michon will be aiming to produce a strong performance in front of her home crowd. 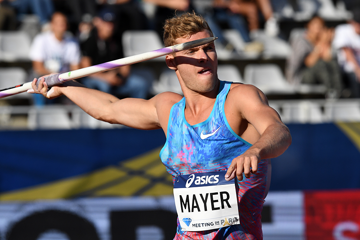