With almost everyone's eyes fixated on the clock on Friday (30) on the eve of the main competition programme for the IAAF Diamond League meeting in Eugene, Galen Rupp remained focused on competing, unmoved by time.

That is until the final two laps.

With 800 meters remaining and sensing the fatigue in his competition, the 28-year-old Olympic silver medallist lowered the boom, clicking off two impressive final quarters to win the men's 10,000m in 26:44.36, shattering his US record and drawing roaring approval from the Hayward Field crowd on the opening night of competition at the 40th edition of the Prefontaine Classic.

Rupp's time bettered his mark of 26:48.00 from Brussels in 2011 and stands as the second-fastest time ever run on US soil. Only world record-holder Kenenisa Bekele of Ethiopia has ever run faster here, clocking his all-comers record of 26:25.97 here in 2008.

"Honestly I wasn’t really looking at time until a quarter mile to go, the last lap," Rupp said. "I was just really worried about competing. We didn’t just want to think about this as an opportunity to run fast. It really was about competing. I was happy with that first and foremost and then the time on top of that was a great way to finish."

The IAAF Diamond League portion of the meeting kicked off with field events that saw Croatia's Sandra Perkovic continue her domination of the women's discus, Serbia's Ivana Spanovic setting a world lead in the women's long jump, and USA’s Reese Hoffa score his third straight victory at this meeting in the men's shot put. But Rupp's performance was the highlight of Distance Night, which has become the precursor to Saturday's main program.

The race unfolded as primarily a four-man affair between Rupp, Paul Tanui, the world bronze medallist who ran 26:50.63 here in 2011, Bedan Karoki, who finished third in this race in 2012 which doubled as Kenya’s Olympic Trials, and Stephen Sambu, who was only asked on Wednesday to serve as a pacemaker.

The early pace saw consistent 63-second laps and the leaders come through the halfway point in 13:26.44. But when the primary pacers stepped off the track, the pace began sagging. With 800 meters remaining, Rupp decided it was time to take matters into his own hands.

"I could tell the pace was starting to slow down a bit and I thought those guys might be getting tired so I decided to just go for it and see where I was," Rupp said. "I honestly was surprised with how strong I was. I didn’t know what to expect."

Rupp's coach, Alberto Salazar, was pleased with the performance.

"His training has been going really well," Salazar said. "It's been high mileage, more 10km based or focused rather than 5km. More volume, longer intervals, more geared towards 10km than 5km. We're kind of leaving that until later in the season. We knew this might be his last chance at a 10km this season so we decided to go for it here. Looking at how he ran, I think in the ideal race and circumstances he can run 10 seconds faster than he did tonight."

World and Olympic champion Perkovic continued to prove that she has no peer in the women's discus, scoring another dominant victory to push her Diamond Race point total to eight. She led the competition from her opening throw, but it wasn't until her sixth and final attempt that she was able to master the fast throwing surface and get the platter out to 69.32m, which broke her meeting record of 66.92m from 2012.

"The conditions were good, but I had some trouble in the circle," Perkovic said. "It was so fast and I needed four or five attempts to manage how to control the circle. On the final attempt I finally got it and was able to throw 69.32m, which is my third-best result ever.”

Close competitions are nothing new to Spanovic. Prevailing in one, however, is a new experience.

The 24-year-old rallied from fifth place and into podium position in the fourth round, and on her final jump cleared 6.88m to set a Serbian outdoor record and tie the world lead.

Spanovic's mark equalled the third-round jump of Russia's Darya Klishina, who came into the meeting having jumped the same distance in Tokyo on May 11, but she was awarded the victory by virtue of the better second jump, the 6.86m she jumped in round four. With the victory, Spanovic moved into the Diamond Race lead with six points.

Spanovic found herself in a similar predicament in her IAAF Diamond League opener in Shanghai when she wound up finishing behind Nigeria's Blessing Okagbare, 6.86m to 6.85m. Spanovic said that experience helped her remain calm.

"I definitely felt like I had the experience I needed," Spanovic said. "This was very exciting because all of the greatest jumpers in the world were here, so I must be proud of my win."

Hoffa is big shot once again

It took him a while to get going, but once he did Hoffa let fly with the throw he was waiting for in the fifth round, surging into the lead with a season’s best of 21.64m for a record-tying fourth victory at this meeting.

US throwers took the next two podium spots as well as Joe Kovacs unleashed a sixth-round throw of 21.46m. Christian Cantwell, who had led from the second round, wound up third with a sixth throw of 21.38m. Cantwell remains the Diamond Race leader with five points while Hoffa and Kovacs are tied for second with four points each.

Hoffa said it took him a while to get going, partly because he is still trying to master a tweak he made to his technique after injuring his knee at the Kansas Relays in April, and due to the anxiety of competing against a world-class field, even one thinned by the injuries to two-time world indoor champion Ryan Whiting of the US and double world champion David Storl of Germany.

"When you have Christian, who has the world-leading mark at 21.84m, it gives you that little bit of like, 'I gotta push. You never know when he is going to let one fly'," Hoffa said. " And you've got Tomasz [Majewski]. Then you've got Joe [Kovacs] who at Arizona had a throw of 22.40m, so I know he's got the horsepower. You're always going to be anxious when you have top-tier talent." 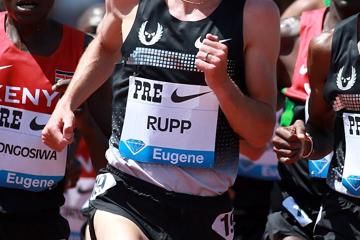 Rupp gets ready to let rip in Eugene – IAAF D... 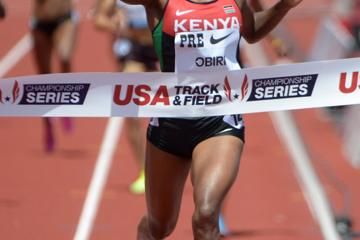 Eugene provisional entry lists, as at 29 May ... 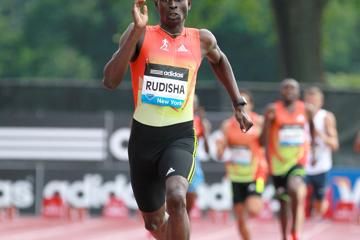