When Kirani James won the 400m at Sunday’s IAAF Diamond League meeting in Birmingham, he reminded the world that the event, once dominated by US sprinters, in recent years had become a truly global event.

His 44.23 meeting record set in the process was just a small step on the Olympic champion’s way to defending his title in August.

James, who finished third at the IAAF World Championships Beijing 2015 behind South Africa’s Wayde van Niekerk and USA’s LaShawn Merritt, left the rest of the Birmingham field in the dust. Former African record-holder Isaac Makwala, who finished fifth in Beijing, crossed the line more than half a second behind him in 44.97.

The 23-year-old is the current world leader with 44.08, clocked at the Drake Relays in Des Moines in late April. He has since backed up his performance with victories at both the Eugene and Birmingham legs of the IAAF Diamond League, making him a strong contender for gold in Rio.

But his performances alone are not what has made the 400m interesting during this current Olympic cycle.

When James, aged just 19 at the time, crossed the line at the London 2012 Olympic Games, he became Grenada’s first Olympic medallist in any sport. Silver and bronze went to Luguelin Santos of the Dominican Republic and Lalonde Gordon of Trinidad and Tobago; an impressive result from three small Caribbean islands with a combined population of about 12 million – less than 5% of that of the USA.

The current global top 10 consists of five Caribbean, two African, two Asian and only one American quarter-miler, but James – who lives and trains in Alabama – knows he is not the only one to have benefitted from the bigger nations’ influence.

“I think if you look at most events, a lot of athletes begin to understand their event a lot better,” said James. “It just shows that the sport really is evolving quickly and a lot of other countries are catching up in terms of having the right infrastructure.

“And that all started from us taking a page from the bigger countries and having people there that can help facilitate that. You still have to pay homage to countries like the US that have a structure like that for the longest, but a lot of smaller countries are now just following suit.”

James knows all too well how big an impact the right set-up can have on rising talent, but he also likes to play down the role his world title in 2011 and Olympic gold the following year had on athletes of smaller nations.

“I don’t know, I just try to run and try to compete,” he says with a shy smile. “It’s up to them to really know whether I had an effect on them, but it’s always good to see them, give them words of encouragement, see if they’re healthy and if they’re alright.”

One of the athletes he is keeping a close eye on is fellow Grenadian Bralon Taplin, who finished fifth in Birmingham on Sunday. After running a world-leading 45.20 during the indoor season, Taplin currently ranks fifth in the world thanks to a 44.41 clocking in Arizona in April and is someone James has known “for a long, long time, ever since he started running for us”.

Facing competition on a national and international level is something James fully embraces, and he also has an eye on potential relay successes in the future.

“At the end of the day, we are all representing the same country, even if it is in the same event, so I am very happy that we have a lot more guys coming out not just doing the 400m,” says James. “We have a couple of decathletes doing really well, and javelin throwers. For me I am just happy that I am a part of this era of where we have a lot of athletes coming out and having world-class performances.”

In Rio, however, his toughest competition will come from outside his own shores.

Before last year, James was the only non-US sprinter in the sub-44-second club. By the end of 2015, that club had four more inductees from four different nations.

“The sport has grown, not only in the Caribbean, but world-wide,” says James. “And because the structure has improved so much, it has levelled the playing field. I know for a fact that as a region we all support each other and it really helps when you have people from Jamaica, from The Bahamas, from Trinidad supporting you and you know, you are doing the same for them. I think that really helps us compete on a global stage.”

James has one more race in Hungary next month before returning to training. But already the stage is set; the men’s 400m promises to be an event that could see fireworks on the track in Rio. 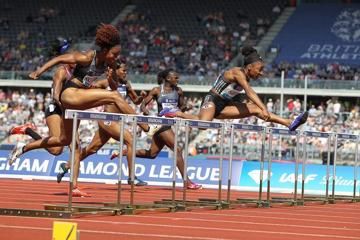