Sha'Carri Richardson, Shelly-Ann Fraser-Pryce, Elaine Thompson-Herah and Dina Asher-Smith have been announced as part of a top 100m field for the Wanda Diamond League meeting in Gateshead on Sunday 23 May.

The world-class four-way clash is set to see Jamaica's multiple global gold medallist Fraser-Pryce and double Olympic champion Thompson-Herah take on Britain's world 200m champion Asher-Smith and the USA's in-form Richardson for the first time, with the four athletes having never previously lined up against each other.

It is sure to provide a sizzling start to the 2021 Diamond League series, with Gateshead having replaced Rabat as the first host for this season's action due to the coronavirus pandemic. As a result, the Gateshead International Stadium will be staging its first Diamond League meeting since the series' inaugural year in 2010.

While Asher-Smith claimed 200m gold at the 2019 World Athletics Championships in Doha, Fraser-Pryce secured her fourth world 100m title there ahead of the Briton, with Rio 2016 100m and 200m champion Thompson-Herah finishing fourth.

Richardson, meanwhile, stormed to a superb 10.72 in Florida earlier this month – a time which places her sixth on the world all-time rankings.

The event is set to see heats of the women's 100m take place at the start of the programme before a final later in the evening, with the line-up also including Britain's world under-18 200m record-holder Amy Hunt.

The meeting – which looks forward to welcoming back fans in some capacity – will be broadcast live internationally from 19:00-21:00 BST, but the action will get under way at 18:00 with a series of para athletics events, as well as some of the Wanda Diamond League field competitions. 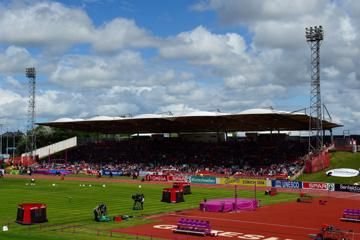