Strong cast of world and Olympic champions confirmed for Stockholm

Despite the challenging circumstances, organisers of the Bauhuas Galan have managed to assemble a star-studded cast for the Wanda Diamond League meeting in Stockholm on 23 August.

The men’s pole vault, featuring world record-holder Mondo Duplantis, will be one of the main attractions for Swedish fans. The young Swede will face the two men with whom he shared a podium at last year’s World Championships in Doha: gold medallist Sam Kendricks and bronze medallist Piotr Lisek. Olympic champion Thiago Braz and 2013 world champion Raphael Holzdeppe have also been confirmed.

Two-time world 400m hurdles champion Karsten Warholm won’t have to worry about clearing any barriers in Stockholm as he’s set to contest the 400m flat. If conditions are good, he may even try to crack the long-standing European record of 44.33.

All three medallists from the men’s 800m at last year’s World Championships – Donavan Brazier, Amel Tuka and Ferguson Rotich – will clash in Stockholm with Swedish record-holder Andreas Kramer also in the line-up.

Uganda’s Halimah Nakaayi and USA’s Raevyn Rogers, the top two finishers in the 800m at last year’s World Championships, will renew their rivalry over two laps of the track. Britain’s Jemma Reekie, whose indoor clocking of 1:57.91 remains the fastest time in the world this year, will also be in the field. 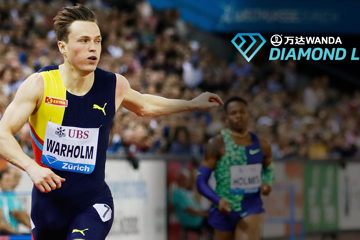