Sergey Shubenkov powered to a 12.92 victory in the 110m hurdles to highlight the Gyulai Memorial in Székesfehérvár, Hungary, on Monday (2) night.

Shubenkov, who was forced to the sidelines after a false start at the Paris leg of the IAAF Diamond League on Saturday, bounced back admirably, propelling himself to the No. 8 spot all-time, a slot he now shares with all-time greats Roger Kingdom and Allen Johnson.

Running in lane six, Shubenkov was virtually even with world and Olympic champion Omar McLeod, two lanes to his inside, over the first five hurdles. Shubenkov began to chisel together a small lead by the sixth barrier, one the Jamaican hit hard, knocking him out slightly off balance, momentarily out of his lane, and entirely out of contention. Shubenkov then forged on to the third sub-13 of his career, and the second in 13 days.

Balázs Baji of Hungary was a distant second in 13.27 with Devon Allen of the US third in 13.36. McLeod meanwhile reached the finish in 13:45, a distant sixth.

Shubenkov's effort was of one four world leads at the meeting's eighth edition, held in this central Hungarian town of 100,000 about 75 kilometres west of Budapest to honour Istvan Gyulai, a former IAAF General Secretary who passed away in 2006.

Mutaz Barshim equaled his world lead in the high jump with an impressive second attempt clearance at 2.40m, but was then once again reminded of the challenges that lurk when he pushes his body to its absolute limits in any would-be world record attempts.

After the ebullient Qatari succeeded at 2.40m, he produced what was in all likelihood the finest jump of his career, a narrow miss at a world record height of 2.46m. Two more misses followed --neither as close as his initial attempt-- but he put a hush over the proceedings after his last, sustaining what appeared to be an ankle injury. The severity of the ailment isn't known at the moment, but in a message to IAAF.org Barshim did confirm he twisted his ankle.

"I think that’s my best attempt ever on 2.46m WR," Barshim wrote on his Instagram account. “Good competition but unfortunately ended up with an injury. I hope that’s not going to be so bad that’s all I can say for now. Will know more after the check up tomorrow and the doctor opinion.”

Is appearance at Thursday's Dimaond League stop in Lausanne is now very much up in the air.

In the hammer, three-time world champion Pawel Fajdek improved his season's best to 81.14m but it wasn't enough to shake the momentum of his compatriot Wojciech Nowicki who notched his fifth straight victory this season at this IAAF World Hammer Throw Challenge event.

Nowicki opened with a 78.57m toss to take the early lead, and improved to 80.29m in the second, but was overtaken by Fajdek, who threw 80.41m. But Nowicki, the reigning world and Olympic bronze medallist, struck back in round three, spinning to an 81.81m effort to extend his world lead with his fourth personal best of the year. After a foul in round five, he regrouped and ended the competition even better, reaching 81.85m, extending his world lead and lifetime best further still.

Ever the competitor, Fajdek fought on, improving to 81.14m in the final round. It would mark just the third time in his career that he would throw beyond 81 metres and lose.

Another world lead came in the women's mile, courtesy of 1500m world record holder Genzebe Dibaba who cruised to a 4:24.29 run, more than four seconds clear of runner-up Sofia Ennaoui of Poland, who clocked 4:28.37.

Christian Taylor returned to action in the triple jump for the first time in more than five weeks, reaching 17.64m for a comfortable victory over the man he succeeded as Olympic champion, Portugal's Nelson Evora, who notched a 17.05 season's best.

Olympic champion Shaunae Miller-Uibo put in a dominating performance in the 400m, clocking 49.43, a scant 0.01 outside of her season's best. World champion Phyllis Francis and Shakima Wimbley, who shares the world lead with Miller-Uibo, were well back in a virtual tie for second, clocking 50.95.

Luguelin Santos took the men's race in 44.88 comfortably ahead of Boboloki Thebe, who clocked 45.13.

Elsewhere on the men's programme, Yasmani Copello of Turkey won the men's 400m hurdles in 48.93, another meeting record. Michael Rodgers of the US took the 100m in 10.12,

Commonwealth discus champion Fedrick Dacres won for fifth time in the last four weeks, reaching 67.24m to get the better of world champion Andrius Gudzius (66.33) by nearly a metre.

Ayanleh Souleiman won the 1000m in 2:16.08, the second fastest of the year over the rarely-run distance. Kenyan Nicholas Kipkoech was second half a step behin in 2:16:17.

Jamaican Janieve Russell won the 400m hurdles in a meeting record 54.16, ahead of Olympic champion Dalilah Muhammad, who clocked 54.46. 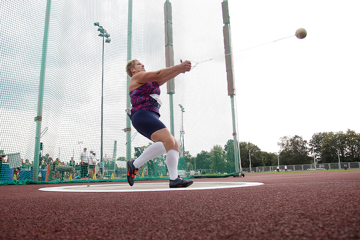