All of Germany’s European medallists will compete in Berlin

As part of their promise to showcase all of Germany’s medallists from the recent European Championships, organisers of the ISTAF meeting have added the women’s shot put and steeplechase to the programme of the IAAF World Challenge meeting in Berlin on 31 August.

It means that European champions Christina Schwanitz and Antje Moldner-Schmidt will join the line-up, alongside fellow European champions David Storl and Robert Harting, both of whom had been already announced, completing Germany’s quartet of gold medallists from Zurich.

It’s not just Germany’s gold medallists who will be in action in Berlin, as all of the nation’s other medallists from Zurich have also been invited.

Discus bronze medallist Shanice Craft will contest the shot put, an event in which she won the world junior title two years ago, while 100m bronze medallist Cindy Roleder will take on European champion Tiffany Porter in the sprint hurdles.

The quartet of sprinters who took silver in the men’s 4x100m – Julian Reus, Lucas Jakubczyk, Sven Knippahls and Alexander Kosenkow – will contest the 100m in the German capital, and European bronze medallist Linda Stahl will line up for the javelin.

“We are trying everything to keep our promise to present all of the German medallists and as many European champions as possible at the ISTAF,” said meeting director Martin Seeber. “I’m pleased that both Christina Schwanitz and Antje Moldner-Schmidt have agreed immediately and now the German golden quartet will be on show in Berlin.” 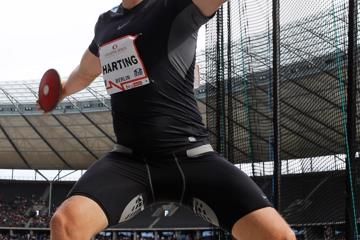 Harting, Rutherford and Storl among the stars...