Jumping before a crowd of nearly 1000 spectators outside of a mall in central Nanjing, Tajay Gayle notched a convincing victory in the street athletics style long jump competition that kicked off the inaugural Nanjing World Challenge meeting on Monday (20).

Sitting in fourth place with a best of 8.03m after five rounds, Gayle sailed 8.21m on his final leap to collect his fourth consecutive victory and his second in just over 48 hours. The 22-year-old Jamaican took top honours in Shanghai on Saturday, about 300 kilometres to the east, where he jumped 8.24m.

"This was fun, I enjoyed it," Gayle said, who competed at this type of street venue for the first time. With a crowd lining one side of the raised runway under flashing lights and with a DJ blasting loud music, he liked the experience and would be happy to see more of it.

"The crowd is really close, and I felt the vibes and the energy from the people. I just felt really, really happy getting those vibes from the people watching."

So did the local stars.

Zhang Yaoguang, the runner-up at last month's Asian Championships, reached 8.10m in the second round to finish second here as well. Goa Xinglong hit 8.10m in the opening round but was edged by his much more consistent compatriot on countback. Jamaican Damar Forbes, a 2016 Olympic finalist, was a distant fourth with 7.90m.

The main programme of the third 2019 IAAF World Challenge meeting gets underway at 18:30 local time at the Nanjing Olympic Sports Centre Stadium with the women's hammer throw which features world record holder Anita Wlodarczyk's 2019 debut as she leads a solid field in this World Hammer Throw Challenge scoring stop.

The two-time Olympic and four-time world champion, who has won six World Hammer Throw Challenge titles, will be facing Gwen Berry and DeAnna Price of the US and local favourite Wang Zheng who are currently 1-2-3 on the world season's list.

The headline acts in the sprints will be racing in the women's 200m, where Salwa Naser will be taking on double Olympic champion Elaine Thompson.

Naser, the 400m winner in Shanghai two days ago, will be moving down in distance from her usual stomping ground, although she's shown promise this season, having already improved to 22.74. Thompson meanwhile will be hoping to improve - quality-wise, that is - on the 11.14 dash she produced in her season's debut in Shanghai, where she finished third. Nigerian Blessing Okagbare, who was second in the Shanghai 100m, and Ivet Lalova-Collio, who won the 200m in Osaka on Sunday, are also in the field.

On paper, the men's 100m is quite evenly matched with a field full of sub-10 men in search of their first sub-10 of the season.

Locals will be focusing on Xie Zhenye, a 9.97 man who was sixth in Shanghai, while Isiah Young of the US and Andre De Grasse of Canada are also expected to be in the mix.

McLeod vs Xie in the men’s highs

The sprint hurdles are always a popular event in China, so organisers have attracted strong fields for both the men's and women's races.

The focus in the men's race will fall on world and Olympic champion Omar McLeod, the Shanghai winner in 13.12, and China's next great hope, Xie Wenjun, the Asian champion who improved to 13.17 in Shanghai behind the Jamaican. Sergey Shubenkov, third in Shanghai in 13.28, will almost certainly run faster now that his debut is out of the way.

On the women's side, Christina Clemons (12.79) is the field's fastest this year. Olympic champion Brianna McNeal and compatriots Nia Ali and Queen Harrison are also in the line-up.

Meanwhile, the men's 400m hurdles features Poland's Patryk Dobek and Estonian Rasmus Magi, who were fourth and fifth in Shanghai.

Three-time world triple jump champion Christian Taylor headlines the fields in the jumps in his 2019 international debut. The 28-year-old sailed 17.18m in his opener in Long Beach, California, on 20 April, but will have his hands full with compatriot Omar Craddock, who jumped 17.16m to win in Osaka on Sunday, and long-time rival Pedro Pablo Pichardo, who'll be making his 2019 outdoor debut. Quite often, Taylor and Pichardo manage to bring out the best in each other.*

In the women's long jump, Australian Naa Anang leads the field, her 6.81m from early Apil still the second farthest jump in the world this season. Olympic champion Tianna Bartoletta is also in the field.

Arafi moves down to 800m

Another Shanghai winner, Rababe Arafi, returns to action, but in the 800m instead of her favoured 1500m. But she's hardly a slouch over the shorter distance: she was fourth at the 2015 World Championships and clocked a 1:57.47 lifetime best last year. Her stiffest challenge could come from Kenyan Eunice Sum, who has sub-1:57 credentials.

In the 1500m, Shanghai runner-up Gudaf Tsegay will be back in action, taking on Sifan Hassan, who was fifth on Saturday.

World 800m leader Nijel Amos returns to the track for the first time since his thrilling win at the Diamond League opener in Doha 17 days ago.

And in the 3000m steeplechase, Ethiopian Chala Beyo (8:07.27, PB), who was fourth at the Doha Diamond League, could be the man to beat. With an 8:06.19 best, Kenyan Benjamin Kigen has gone about a second faster.

BACK
Pages related to this articleAthletes
Tajay GAYLE 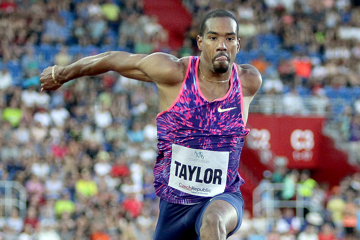