Botswana's Amantle Montsho in action in the 400m (© Getty Images)

World 400m champion Amantle Montsho and Olympic 1500m champion Taoufik Makhloufi are among the headline acts at the IAAF World Challenge meeting in Dakar on Wednesday (12).

For Botswana’s Montsho it will be a homecoming of sorts in the city where she is based for much of the year. A regular at the Dakar meeting, Montsho has won the 400m here twice previously. After her first win in 2008, she returned in 2010 to break her own meeting record with 50.94.

The 29-year-old is undefeated over one lap this year. Four of her five victories have been in Diamond League meetings, and three of those winning performances were with sub-50 clockings.

Her main opposition in Dakar is likely to come from Jamaica’s Patricia Hall. A 50.71 performer at best, Hall has dipped under 51 seconds this year for 400m and last month smashed her 200m PB with 22.51 in Sao Paulo.

Makhloufi, the surprise winner of the 1500m title at the 2012 Olympics, will step down in distance in Dakar to the 800m. Although it’s not his specialist event, he is accomplished over two laps, having won the African title last year in 1:43.88 before going on to record two more sub-1:44 times at the end of the 2012 season.

The Algerian opened his season in Eugene earlier this month in the Mile and clocked 3:52.94 for 11th place on his debut over the distance. He will be looking to improve on that finish, but will be pushed all the way by the man who finished behind him at last year’s African Championships, Anthony Chemut of Kenya.

Collins and Ouhadi the sprint favourites

At last weekend’s IAAF World Challenge meeting in Rabat, 2003 World champion Kim Collins looked to be on course for a surprise 100m victory over Justin Gatlin and Christophe Lemaitre, but after leading for almost all of the way, he was caught at the end.

In Dakar, Collins hopes to last the full distance and improve on the world age-37 best of 10.04 he ran in Doha last month. His toughest opposition could come from Moroccan record-holder Aziz Ouhadi, who also lines up in the 200m – an event he won in Rabat last weekend.

Caceres and Dmitrik the in-form jumpers

Spain’s Eusebio Caceres was an emphatic winner in Rabat at the weekend with 8.22m. He had only one valid jump in the Moroccan capital, so a more consistent series in Dakar could see him improve on that mark. Former World indoor champion Ignisious Gaisah will be among those vying for the victory.

World silver medallist Aleksiy Dmitrik is the top name in the High Jump and he has already cleared 2.30m this season, but his sixth-place finish in Rabat means he is just a tentative favourite. With the likes of Kabelo Kgosiemang, who finished third in Rabat, and Kostadinos Baniotis, who tied with Dmitrik in Rabat, it could be a close competition.

Elsewhere in the field events, the much-improved Martin Stasek of the Czech Republic will be up against Portugal’s World finalist Marco Fortes in the Shot, while South Africa’s Lynique Prinsloo takes on Bianca Stuart of The Bahamas in the Long Jump, both athletes with identical PBs of 6.81m.

The last time two-time World indoor silver medallist Daniel Kipchirchir Komen clashed with Bahrain’s Benson Seurei, just 0.01 separated them. On that occasion, at last month’s Diamond League meeting in Doha, Seurei prevailed in 3:33.04 as both athletes set season’s bests. The pair will race again in Dakar and will be up against Zakaria Maazouzi, the Morrocan who earlier this year posted a huge PB of 3:31.94.

Perhaps the event with the best chance of a home victory is the men’s 400m Hurdles, where Senegal’s Mamadou Kasse Hann is the in-form athlete. The 26-year-old has set two PBs so far this year, his most recent one – a 48.56 clocking – coming at the Rome Diamond League where he finished third. South African champion Cornel Fredericks should also be in contention. 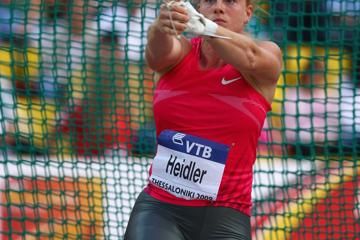