Statisticians A Lennart Julin and Mirko Jalava look back on the best sprint performances of the year, with Julin covering the men’s events and Jalava the women’s.

Perhaps the most conspicuous recent trend in our sport concerns the 100m where – spearheaded by Jamaica and USA – the yearly number of runners goinjg under 10 seconds has doubled in the last eight years.

In 2013, Usain Bolt stayed at the forefront although he didn’t find the kind of overwhelming form he showed in 2008 and 2009, but, with the assumed heir apparent Yohan Blake out with injury and with Tyson Gay and Asafa Powell suspended early in the season, the only serious opponent to Bolt’s supremacy was Justin Gatlin.

Gatlin even managed to inflict an early defeat at the IAAF Diamond League in Rome but, during the main part of the season, Bolt was once more unstoppable although his winning margins were generally les than 0.1.

The average age of the IAAF World Championships medallists was 28 but there was also a group born in the 1990s that showed interesting progress.

Jamaica’s Kemar Bailey-Cole,  who just missed out of a medal in Moscow, and France’s consistent Jimmy Vicaut are almost on par with the likes of Bolt and Gatlin; and then there is Japan’s Yoshihide Kiryu who, at the age of 17, was just 0.02 away from becoming the first teenager to run under 10 seconds in legal conditions.

However, youth is not everything even in sprints.

Mike Rodgers, 28, had his best ever season and consistently churned out sub-10s, St Kitts’ 2003 World champion Kim Collins at age 37 lowered his national record to 9.97 and Great Britian’s James Dasaolu, a relatively youngster at 25, improved his best by almost 0.2 to 9.91 and, despite being hampered by injury, also reached the Moscow final.

The 200m in general is currently a Jamaican property.

Even though Yohan Blake was missing due to injury, the main challenger to Bolt’s hegemony also wore the famous yellow-and-green apparel. Warren Weir, whose Moscow silver in 19.79 and Diamond League final win (when Bolt didn’t run) in 19.87 were supplemented by four more times under 20 seconds.

Add to that pair Nickel Ashmeade, who was fourth in Moscow, and Jason Young, who had three sub-20 outings but there was still no room for him in the Moscow team, and you can see Jamaica’s present depth in stark relief.

The only runner capable of denting the Jamaican dominance at the top end was the USA’s Curtis Mitchell, who squeezed Ashmeade out of the medals in Moscow when finishing third.

The challenge from France’s talented Christophe Lemaitre, the World Championships bronze medallist in 2011 at the age of 21, sadly never materialized due to injury but another European 200m prospect emerged in the shape of Great Britain’s prodigious Adam Gemili.

Previously seen as a 100m specialist, partly due to winning the IAAF World Junior Championships title in 2012, the teenager astounded everybody – himself included – in Moscow when finishing fifth after dipping below 20 seconds in his semifinal.

Just a month earlier, Gemili he had finished just fourth in the European Athletics U23 Championships 200m.

Another name to watch for the future is South African Anaso Jobodwana.

Still occupied with his studies at a US college, he was a finalist in 2012 Olympics and then again now in Moscow, and also won the World University Games 200m in Kazan.

This was very much a two-man show in 2013. Only the USA’s LaShawn Merritt and Grenada’s  Kirani James got under 44 seconds and they took turns at beating each other.

James won in the IAAF Diamond League in Shanghai, Merritt in Eugene, then James in Paris before Merritt gained the upper hand and took the gold medal at the IAAF World Championships and in the Diamond League final in Zurich as well.

Underlining their supremacy was that on one else – except when James faded to seventh in the Moscow final – was even near.

In the seven Diamond League-races the average gap to the best of the rest was almost 0.6.

Behind the top two, there was a fairly evenly matched group of runners between 44.5 to 45.0

USA’s Tony McQuay showed a markedly improved consistency and grabbed the Moscow silver a step ahead of the Dominican Republic’s Luguelin Santos, who was still a teenager despite his London 2012 Olympic Games silver medal.

Maslak this year successfully finalised his transition from being a 200mspecialist while Al-Masrahi and Henriques both took major leaps forward out of the fairly anonymous group of runners around 45.5.

Traditionally, the USA dominated this event in such a way that clean sweeps of the medals were almost expected but that has changed dramatically in recent years.

In Daegu 2011, they had just one finalist over one lap of the track and in London 2012 none! However, 2013 marked a recovery in the US fortunes with the one-two finish of Merritt and McQuay although the 400m now seems to permanently have become much more diverse.

The start of the women’s 100m season suggested that it might be a much more varied group of individuals reaching for the top of the podium, and not just the usual suspects of recent years.

As the reigning champion from Daegu 2011, the USA’s Carmelita Jeter had the luxury of not being required to take part to the US Championships and had a quiet start to her season, showing very little of her form due to some minor injuries.

With Jeter absent, all eyes were on the two-time Olympic champion Shelly-Ann Fraser-Pryce.

The 26-year-old Jamaican started her season convincingly, winning at the IAAF Diamond League meeting in Shanghai in 10.93.

As it turned out, the second-placed athlete in the Chinese city was going to be her biggest rival during the season, Nigeria’s 25-year-old Blessing Okagbare, who is also a world class long jumper, clocked 11.00 in her first 100m race of the season, having previously clocked a 200m world-leading time of 22.31 in April.

The same duo went on to challenge for the win in Eugene with the Jamaican winning in 10.71 against 10.75, with the wind just barely over the legal limit.

Both then competed sparingly before Moscow although Okagbare showed her form by setting two African records in IAAF Diamond League meeting in London with 10.86 in her heat and then 10.79 in the final, into the bargain serving Fraser-Pryce with her only loss of the season as she had to settle for fourth in 10.94).

However, at the IAAF World Championships in Moscow there was no doubt about the winner and Fraser-Pryce grabbed her first World title to add to her two Olympic crowns, stopping the clock in 10.71 for a legal world leading time.

Okagbare fading to a disappointing sixth place in 11.04 and, instead, it was Ivory Coast’s Murielle Ahoure who proved herself to be the top African in Moscow when she finished  second in 10.93, with 2011 winner Jeter third in 10.94.

Fraser-Pryce almost matched her Moscow performance with a 10.72 win, running into the same 0.3mps breeze that she faced in the Russian capital, at the IAAF Diamond League final in Brussels, adding the Diamond Race in this event to the one she had clinched over 200m in Zurich a week earlier.

In the 200m, the USA’s 2012 World Athlete of the Year and London 2012 Olympic Games champion Allyson Felix arrived in Moscow as the slight favourite to regain the World title she had won on three consecutive occasions from 2005-2009.

This was despite the fact that she was beaten in the US Championships wind-aided final, clocking 21.85 against Kimberlyn Duncan’s 21.80 winning time.

However, the 22-year-old Duncan, who won three straight NCAA 200m titles from 2011-2013, struggled to rise to the occasion in the Russian capital and did not get past the semifinals.

By the time the gun was ready to go for the final, Felix’s rivals included the same runners that had got the 100m medals earlier in the Championships.

Blessing Okagbare was an early world leader with her 22.31 in Walnut in April and 100m winner Fraser-Pryce, the 2012 Olympic Games silver medallist behind Felix, had beaten that time winning the Jamaican Championships in a 22.13 season’s best in June.

Murielle Ahoure was also in the picture having set a 22.24 national record when winning at the IAAF Diamond League meeting in Monaco.

Sadly, Moscow was not going to deliver another title for Felix because having the fastest semi-final performance with 22.30, as the American tore her hamstring on the bend and Fraser-Pryce became a double winner with an impressive 22.17..

Ahoure and Okagbare fought gallantly for the silver with Ivory Coast sprinter dipping in front of her Nigerian rival to get her second silver medal. Both women were timed at 22.32 to become the first two African medallists in the history of this event.

Fraser-Pryce then capped her season with a 22.40 win at the IAAF Diamond league final in Zurich to take the Diamond Race in this event.

The reigning World champion from Daegu 2011, Botswana’s Amantle Montsho did almost everything right in 2013.

The 30-year-old only lost twice in her eight finals prior to Moscow and managed to bring down her own national record from 49.54, set in from 2012, to 49.33 when clocking the 2013 world leading time for a win in the last meeting before the IAAF  World Championships at the IAAF Diamond League meeting in Monaco.

She then almost matched that with 49.41 in the Moscow final, not to mention a 49.56 semifinal win, but still ended up with only the silver medal.

Montsho must feel that Christine Ohuruogu is something of a magician, so different is the way that the 29-year-old Briton approaches major championships.

Ohuruogu was nowhere near the top of the lists before the 2012 Olympics Games in London but still won the silver medal and so the experts were advised that she would probably have something to offer in Moscow after her 50.58 season opener in Kingston in May, which was the fastest yearly start to her career, and the 50.00 when winning at the IAAF Diamond League meeting in London, her last meet before the Moscow.

She was only in fourth place at the start of the home straight in the final, but caught up with Montsho right on the finish line, regaining the World title she had won before in 2007 when stopping the clock in a national record 49.41, the same time as Montsho on the results but the British girl got the verdict by 0.004.

Russians have usually not been able to keep up with their pre-championship performances in the 400m, but Antonina Krivoshapka, who had the second fastest time before Moscow, won the bronze in 49.78, just slightly off her 49.57 season’s best.

The USA’s Natasha Hastings, fifth in Moscow, came good at the end of the season and won the IAAF Diamond League final in Brussels in 50.36, beating the four women who had finished in front of her at the World Championships, but Montsho’s second place was good enough to give her the Diamond Race. 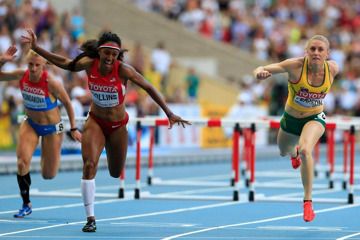 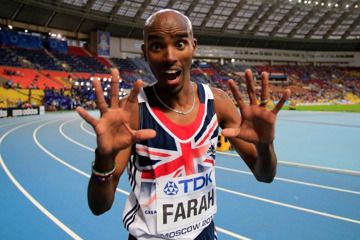 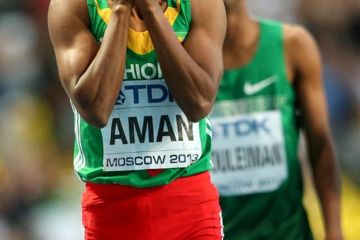