When Spain’s Jesus Angel Garcia takes to the start line for the 50km Race Walk at the 2013 IAAF World Championships in Moscow, he will make history for the most appearances by a male athlete in the history of the event.

Now aged 43, Garcia is the oldest member of the Spanish team for Moscow. At the other end of the scale, fellow race walker Alvaro Martin is the youngest member of the team at just 19 years old. Martin, who was born one year after Garcia’s World Championships victory, took bronze at the recent European Junior Championships and will contest the 20km event in Moscow.

Spain won just one medal at the last World Championships in Daegu, courtesy of Natalia Rodriguez in the 1500m. The 34-year-old will be the sold Spanish entrant in that event; likewise, David Bustos was the only Spanish man selected in the 1500m.

Spain’s best medal hopes could come in the jumping events. Eusebio Caceres, the recently-crowned European under-23 champion, jumped a PB of 8.37m to win in Tampere, putting him third on this year’s world season list.

High jumper Ruth Beitia, the European champion indoors and out, is a consistent championship performer and will be keen to win her first medal at an outdoor World Championships.

BACK
Pages related to this articleAthletes
Jesús Ángel GARCIA 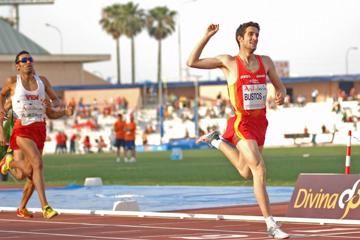