9 December 2012 – Melbourne, Australia – There was something strikingly different about Luke Adams as he won the Australian 50km race walk title on Sunday morning, and with it selection for the team to contest the IAAF World championships in Moscow next year.

Adams was sporting a luxurious full beard, a legacy of a post-Olympic trip through eastern Africa.

There will be another significant difference about Adams come next August, he fervently hopes. In what will be his sixth World Championships appearance, he wants to be on the medals’ dais for the first time.

The veteran 36-year-old has been a model of consistency since breaking through at world level with his fifth place in the 20km at the Paris 2003 World Championships. In five further World Championships races – three at 20km, two at 50km – he has only once finished outside the top 10.

Adams covered the 50km on the circuit on the internal roads within Melbourne’s inner-city Fawkner Park in 3:57:24, making him an automatic selection for Moscow 2013. He will join Olympic silver medallist Jared Tallent who was pre-selected on the basis of his performance in London.

Adams looked strong from the outset, breaking away from Ian Rayson and London 2012 20km representative Chris Erickson before the 10km mark, which he passed through in 46:19.

Rayson finished second in 4:00:39, also under the IAAF A standard. Rayson, 24, will not be an automatic selection, but he has a strong case for the third spot having walked the standard in the selection race. Erickson withdrew 34km into the race.

Adams was not forthcoming on how long the changed facial look would last. He grew the beard while travelling through Africa. After London he spent some further time in Europe before visiting Africa. He was born in Mvumi, Tanzania, where his parents were medical missionaries and his eldest brother lives with his family for four children in Addis Ababa.

“It was easier to let it grow than to shave,” said Adams.

It was easy to forego other things, too. “I’d forgotten how hard it was to do regular training there,” Adams said, so he did little formal training as he travelled through Kenya and Ethiopia, completing one journey by hitching a ride on a milk truck.

Off a limited preparation, Adams was pleased with his 3:57:24 performance. Race walking is noted for long careers, but even so, at 36 Adams is running out of time to cap his five World Championships top-10 finishes with a performance that puts him among the medals.

Adam’s victory is his second national 50km walk title after winning in 2010.

In other events at the Australian 50km Race Walking Championships, Brendon Reading won the men’s 20km event in a time of 1:26:24. This is his first qualifier for the Summer Universiade in Kazan, Russia, next year.

BACK
Pages related to this articleAthletes
Luke Adams 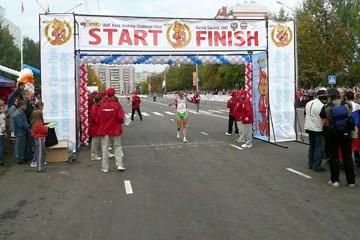 Luke Adams determined to walk his own path... 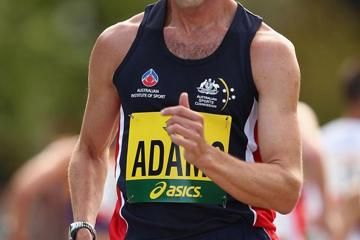