Three-time world champion Kiprop has not yet peaked

When you’re Asbel Kiprop, you can win just about any way you want.

You can run from the front, galloping with that impossibly long stride – as he did during his 3:26.69 run in Monaco earlier this summer – and watch as your competitors slowly disappear into the rear-view mirror.

You can run from the back – as he did at the IAAF Diamond League meeting in London – and circle the entire field on the last lap, sickening them with your gifted range of gears, your almost unfair allocation of athletic ammo.

You can even beat the world’s best milers in the biggest competition of the year, for the third consecutive IAAF World Championships, when under the weather.

“I had flu after the semi-finals,” said Kiprop, coughing intermittently, shortly after taking gold in the men’s 1500m final on Sunday evening. “Before the race I told the Kenyans to work extra hard because I was not reliable.”

Though there was a time when Kiprop was less than reliable in championship finals, this was not one of them. The 26-year-old swept from ninth to first over the final 300 metres to take gold and ignite conversations about whether he is the greatest miler of all time.

“He’s pretty amazing,” said Nick Willis, who won silver behind Kiprop in the same stadium at the Olympic Games in 2008 but could only manage sixth this time around. “Considering he had the flu this morning, we thought he was looking pretty vulnerable, but he’s the man to beat.”

Since his third-place finish at the Prefontaine Classic in May – where over-confidence was his downfall – Kiprop has been unbeaten, and relatively unbeatable.

In reality, no one has got close, something which must make his rivals wish Kiprop had followed his parents’ advice when he first started running at the age of 13.

“They would not allow me to train,” recalls Kiprop. “I was still growing and they didn’t want me to mess up my muscles. I was going for long runs and that’s not good for a person like that.”

Kiprop, who eventually grew to be 6ft 2 in (1.88m) and impossibly thin, showed few early signs of the world-beating talent that lay within. “I was racing in primary schools but I was not even going to district level,” he says. “That’s the lowest level in Kenya. I went to run in high school but was not even making it to nationals.”

In 2006, though, Kiprop narrowly missed out on the Kenyan team for the IAAF World Junior Championships in Beijing, finishing fourth in the national trials. He made his big breakthrough the following year, finishing fourth in the 1500m at the IAAF World Championships in Osaka while still a junior. All of a sudden, he was one of the hottest properties in Kenyan athletics.

Since then, he has accrued three world titles, an Olympic gold medal and – with that run in Monaco – become the third fastest 1500m athlete in history, behind only Hicham El Guerrouj and Bernard Lagat.

Only El Guerrouj has managed to win the world title four times, and after his third, Kiprop was looking forward to joining the Moroccan in such rarefied air.

“El Guerrouj is my idol, and it’s my hope one day to be world champion four times and break the world record,” he says. “I’m trying to join the greats. To complete my legacy, I must get the world record.”

Kiprop, though, says that can wait until next year. In his next race – at the IAAF Diamond League final in Zurich on Thursday night – he just wants to win. After another race or two in Europe, he’ll return home to Kaptinga, Kenya to celebrate his gold medal.

“I come from the same area as Nicholas Bett [who won gold in the 400m hurdles in Beijing]. He will already be celebrating when I am in Europe, so I would like to join in the celebration.”

Before the new season looms into view, Kiprop will use his spare time to help a cause close to his heart: wildlife conservation.

“I love to try and protect nature, to teach people how to protect wildlife,” he says. “The number of elephants is dropping as they have killed so many, so it’s important to preach this globally to these people who buy elephant tusks, to stop this market in order to save nature.”

Elsewhere in his personal life, Kiprop has a curious second passion. “I like rally,” he says. “I’ve been taken out by a colleague when he was doing a road test.”

And what does Kiprop’s coach David Leting and agent Federico Rosa make of that?

In that sense, it is little surprise Kiprop has such an affinity for the sport, but what’s left for the long-striding speed racer on the track? Might the 5000m – and claiming back some Kenyan pride after the dominance of Britain’s Mo Farah – whet his appetite?

Kiprop has few genuine threats to his dominance in his current domain, but what fuels him now is competing against the greats of the past. Still only 26, and after the best year of his career, there’s every chance he’ll surpass them.

“I have matured with time,” he says, “and I still have a lot of room for improvement.”

For Kiprop’s rivals, that must be a scary thought. 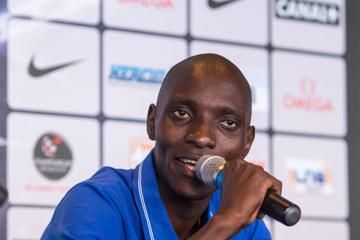 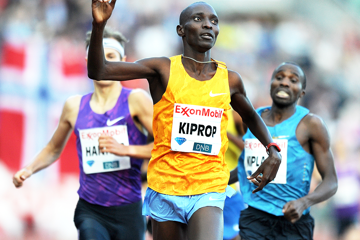