A combination of persistence, passion and pure doggedness have proved the driving force for Yarisley Silva to overcome all manner of hurdles on her long and winding road to the top.

It was on Wednesday evening inside the Bird’s Nest Stadium when the diminutive Cuban finally stood tall as the champion.

After teetering on the edge of elimination at 4.70m, Silva found the resolve to clear the bar at the third time of asking. Then, having successfully negotiated both 4.80m and 4.85m, two failures at 4.90m left her needing a third-time clearance to dislodge Brazilian Fabiana Murer from gold. Again, she found it within herself to flip over the height – within one centimetre of her lifetime best – to prove she was the woman with the Midas touch.

“I’m very proud,” she says of her success. “There are a lot of long years of hard work. My family will be very proud of me. To win here is, of course, my very big dream.”

Hailing from Pinar del Rio in the far west of Cuba, her mother was a former javelin thrower and she was first introduced to athletics aged nine by her aunt, a PE teacher. Silva tried her hand at the sprints, long and high jump but at the age of 13 she was told by her school teacher to try the pole vault.

“To be honest, I didn’t even know the pole vault existed,” she says. “My teacher just told me this is a pole, this is how you jump and the first time I tried it, I loved it. Back then it was just a game and something new to try.”

Success quickly followed as she won silver at the National School Games with a 2.50m clearance. Twelve months later at the same event she struck gold with 3.10m and earned a call-up on to the Cuban junior team.

She soon came under the guidance of her current coach Alexandre Navas Paez and in 2004 improved further to vault 4.00m and set an area junior record in Havana. Two years later she won silver at the Central American Games in Cartagena, but it was a far from a straight-forward rise.

“It was very difficult at first because it was a new event (the women’s pole vault) and there were not many training camps,” explains Silva, who plans to auction her gold-medal-winning kit to raise funds for Kira Grunberg, the Austrian pole vaulter who was paralysed following a training accident last month.

“It was very difficult at the time because we did not get good results and we were suffering from lack of results in Cuba. We had to overcome a lot of hurdles because many people did not believe in us. We didn’t have a lot of equipment back home, so it was hard to achieve the 4.50m I needed to be selected for international competition. We didn’t have a lot of support. I remember people telling me, ‘why are you doing the pole vault? You are too short and fat.’ I had to overcome all these critics.”

Yet Silva’s passion for the pole vault never wavered. She always believed better times were around the corner and embraced the attitude instilled into her by her long-time coach, Paez.

Her persistence and belief was rewarded in 2008 when she vaulted 4.50m for the first time and won selection for the 2008 Olympic Games at the same Bird’s Nest Stadium in which she struck gold last week. There she failed to advance from her qualification pool with 4.15m, but rather than let the experience crush her, it gave her an added motivation to succeed.

“Fabiana (Murer), Yelena Isinbayeva, (Jenn) Suhr, (Anna) Rogowska, everyone was here, but I realised they all had two arms, two legs and were a human being just like me, too,” said Silva. “I went back to Cuba and I said, ‘now we are going to train hard. I know I can do it’.”

It was not an instant road to success for Silva but under her coach’s instructions and now enjoying improved facilities and better equipment, the PE teaching graduate made a big breakthrough into world class in 2011.

She improved her PB by 25 centimetres throughout the course of that year, setting an area record of 4.75m when winning gold at the Pan American Games in Mexico. Before that, she finished fifth on her World Championships debut in Daegu. Since that breakthrough she has emerged a consistent performer at the highest level, winning Olympic silver in London, world bronze in Moscow and world indoor gold in Sopot.

Training with a group of 15 and 16-year-olds in Havana, Silva overcomes her relative lack of height (she is listed as 1.69m tall) through a combination of her speed and good technique. Yet she admits she started to struggle with her plant earlier this year. To counter the problem, she decided to lower the height of her grip from 4.30m to 4.15m and after a slow start to the season the move has proved a masterstroke.

Silva first revealed her rich vein of form when winning gold with a 4.85m clearance at the Pan American Games last month and followed it up by adding one centimetre to her lifetime best with 4.91m in Beckum to solidify her place at No.3 – only Isinbayeva and Jenn Suhr have jumped higher – on the world all-time list.

Here in the white-hot intensity of World Championship competition, Silva refused to panic. When she needed to, Silva rectified a potential crisis by calmly changing her pole which enabled her to successfully clear 4.70m and 4.90m at the third time of asking.

She was naturally elated to strike gold and send the excitable Cuban fans home delirious, but in some respects her success in Beijing was not about the gold medal. It was about the journey which began for her as a 13-year-old girl from the West of Cuba.

“I love pole vault because it has given me everything,” she adds, tears streaming down her face. “It has made me the person that I am today.” 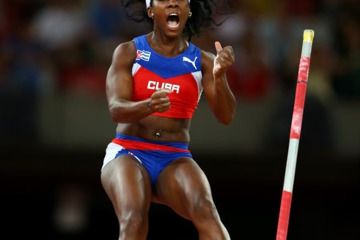