As expected, host nation Russia leads the team standings at the end of the first day of action at the European Team Championships in Cheboksary with world champion Aleksandr Menkov being one of five Russian winners on Saturday (20).

Roared on by the enthusiastic home crowd in 31C heat, Menkov took an early lead in the long jump with 8.14m in the first round. He bettered that mark two rounds later with 8.26m, aided by a perfect 2.0m/s following breeze.

Just the top four athletes in any field event in this competition are given a fourth and final attempt and France’s fourth-placed Kafetien Gomis seized the opportunity. The 35-year-old flew out to a personal best of 8.26m to move up to second place on countback behind Menkov, who didn’t improve with his final jump.

“Of course the result is not so good, but the weather was too hot,” said Menkov. “I am really glad with the win but not with the result.”

German pole vaulter Silke Spiegelburg prevented an all-Russian sweep of the jumps. The 2013 European Team Championships winner was level with Anzhelika Sidorova before the bar moved to 4.70m, but the Russian cleared that height on her first attempt. After one failure, Spiegelburg moved to 4.75m and got over it on her second try to equal the competition record.

Sidorova tried going higher but was unsuccessful at 4.80m, while Spiegelburg ended with three unsuccessful tries at 4.85m.

“I’m so happy right now,” said Spiegelburg, who missed the indoor season through injury. “One month ago, I didn’t think I’d be able to jump 4.75m, but now I hope to improve with each competition.”

Spiegelburg’s team-mate David Storl was an easy winner of the men’s shot. The two-time world champion opened with 21.12m and improved to 21.20m in the final round to beat two-time Olympic champion Tomasz Majewski, who threw a season’s bet of 20.23m.

Germany also scored maximum points in the javelin, won by world champion Christina Obergfoll with 61.69m, and the steeplechase, won by Gesa-Felicitas Krause in 9:46.49, more than 13 seconds ahead of her nearest challenger.

Along with Storl and Obergfoll, Pawel Fajdek was another world champion thrower to win. The Pole sent his hammer out to 81.64m, the best mark in this competition since 1987 when the event was known as the European Cup.

France had a good first day with four victories on the track and one on the field.

Christophe Lemaitre came through strong at the end of the 100m to pass world indoor champion Richard Kilty, winning in 10.26 into a -1.7m/s headwind. Mourad Amdouni won a tactical 5000m in 14:04.63, while Renelle Lamote held off a fast-finishing Joanna Jozwik to win the 800m in 2:00.18. European 4x400m champion Floria Guei won over one lap of the track in 51.55. World silver medallist Melina Robert-Michon won her third successive discus title with 62.24m.

British athletes won three of the individual sprint events. 2007 world youth champion Asha Philip battled a -1.7m/s headwind to win the 100m in 11.27. European champion Eilidh Child clocked a European-leading 54.46 to win the 400m hurdles, while Jarryd Dunn was a surprise winner of the 400m, holding on to his early lead to clock a big PB of 45.09.

The British men won the 4x100m in 38.21, while Ukraine dominated the women’s event to win in 42.50. Both winning times were the fastest at this competition since it changed its name in 2009 to the European Team Championships.

Aside from Sofia Ennaoui's 9:20.39 victory in the 3000m, the two other individual track events of the day were won by Russians. European bronze medallist Denis Kudryavtsev smashed his PB to win the 400m hurdles in 48.66 and Valentin Smirnov won a close and tactical 1500m in 3:52.03.

It meant the hosts ended the day at the top of the team standings with 187 points. France is currently second with 175.5 with Germany close behind on 172. 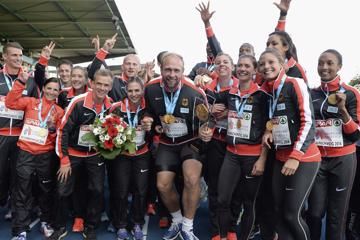