The host crowd had to wait until the final race on the track to celebrate their only gold medal of the day at the Pan American Games in Toronto on Thursday (23).

World bronze medallist Damian Warner produced a superlative performance over two days in the decathlon – part of the IAAF Combined Events Challenge – setting three individual PBs on his way to scoring a Canadian record of 8659, smashing the Games record in the process.

His score is the second-best in the world this year, adding 147 points to the PB he set at the 2013 IAAF World Championships and 33 points to the Canadian record set 19 years ago by Mike Smith, who was watching from the stands.

Warner led throughout the whole competition, opening his campaign with a PB of 10.28 in the 100m. Only three other men in history have recorded faster wind-legal times in a decathlon.

He then flew out to a wind-assisted 7.68m (2.4m/s) in the long jump, his best ever mark under any conditions, and followed it with 14.36m in the shot put, his farthest throw ever within a decathlon.

Warner’s only slight disappointment on the first day came in the high jump in which he cleared 1.97m, some 12 centimetres shy of his lifetime best. But he was still comfortably ahead of PB pace and had the national record in his sights.

Warner had the best possible start to the second day, winning the 110m hurdles in 13.44 (2.0m/s), the fastest time ever recorded in that event within a decathlon. He followed it with a PB of 47.56m in the discus and his chances of breaking the national record seemed more and more likely.

But, as was the case on day one, the vertical jumps proved slightly tricky for Warner as he managed just 4.60m in the pole vault, 20 centimetres below the PB he set earlier this year. Nevertheless, he remained in the lead at the end of that event, almost 300 points ahead of Dos Santos.

He did much better than that, though. Warner chopped five seconds off his lifetime best in the final event, clocking 4:24.73 to bring his winning tally to 8659, adding 286 points to the Games record set by Leonel Suarez in 2011.

“(Mike Smith’s) record has been a target of mine since probably last year when I knew I had the potential to break it,” said Warner. “But I’ve also learned that you can’t go out there and try to break records and stuff like that. You just have to go out there and do your best, and when you do that the numbers come, and that’s what I did here.

"When I made my decision to come here to compete in front of the home crowd, I didn't expect it to be this good,” he added. “I certainly had a great time and I just want to thank the fans that came out for all their support over the last two days. It’s been amazing. I’m glad I got to experience this. It will give me a great boost going into Beijing.”

Dos Santos slipped out of medal contention after the javelin, managing just 47.88m in that event. Felix threw 64.10m, moving him up to second overall; a position he maintained after clocking 4:38.39 in the 1500m, giving him a score of 8269 to better his own national record.

Brazil’s Luiz de Araujo also moved above compatriot Dos Santos after the penultimate event, eventually finishing third with 8179. Despite missing out on a medal, Dos Santos was at least rewarded with a PB of 8019.

Defending champion Suarez looked to be in form to challenge for a medal, but his chances came crashing down after failing to clear a height in the pole vault.

Having taken silver in 2007 while still a junior and bronze four years ago, Cuba's Yordani Garcia finished out of the medals this time, scoring 7919 for fifth place. But it was enough to move him into overall first place in the IAAF Combined Events Challenge standings.

BACK
Pages related to this articleAthletes
Kurt Felix 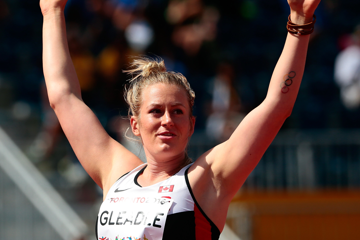 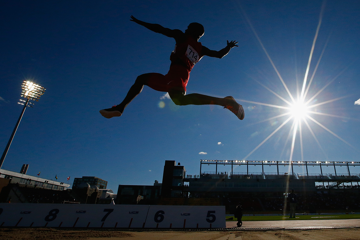 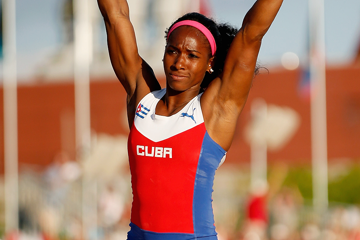