The heroes of Hungarian athletics

The heroes of Hungarian athletics (© olimpia.hu)

Hungarian athletics, which has a history of more than a century, has celebrated many great successes. We will now recall the most important of them.

183 gold, 156 silver, 182 bronze - a total of 521 Olympic medals prove that Hungary is indeed a sports nation. Due to the geographical conditions - apart from recently gained medals in short track - it is the summer Olympic Games where Hungary achieved most of its successes.

Naturally, athletics is also part of this illustrious list. After fencing, swimming, kayaking, wrestling and gymnastics, track and field is the sixth most successful sport in the history of Hungarian sport since the 1896 Olympics.

Our athletes came home with three medals from the very first Games in Athens: Nándor Dáni won the silver medal in the 800 metres, Alajos Szokolyi in the 100 metres and Gyula Kellner in the marathon. The following year the Hungarian Athletics Association was founded, which turned 125 years old in 2022.

We didn't have to wait long for our first Olympic champion, Rudolf Bauer, who triumphed in the discus throw in Paris in 1900. Until the 1972 Munich Olympics, there were only two events (1904 and 1932) without Hungarian medals. 1936 was not one of those years: the high jumper Ibolya Csák won the gold medal in Berlin.

Five out of our ten Olympic gold medals were won by hammer throwers, so it is safe to say that we are a hammer nation. Imre Németh, who won the first post-World War II Olympics in London in 1948, started this fantastic era. His son, Miklós Németh became the world's best javelin thrower, even setting a world record with the old-style javelin, and he became Olympic champion in Montreal in 1976.

Like Imre Németh, Olga Gyarmati also reached the top in the 1948 London Olympics, where our team returned home with two gold medals, as it happened at the 1968 Games.

In the home of tequila and the Aztecs, Hungarians delivered great performance, with Angéla Németh winning the javelin competition and Gyula Zsivotzky triumphing in the hammer throw. There were five podium finishers as well: Antal Kiss won the silver medal in the 50 km racewalk, Lázár Lovász in the hammer throw, Gergely Kulcsár in the javelin throw, Jolán Kleiber-Kontsek in the discus throw and Annamária Kovács in the pentathlon.

Imre Németh was joined on the podium by József Csermák (1952), Gyula Zsivotzky (1968), Balázs Kiss (1996) and Krisztián Pars (2012) in hammer throw. The most recent Olympic champion in Hungarian athletics is also a two-time European champion and two-time World Champs silver medallist. 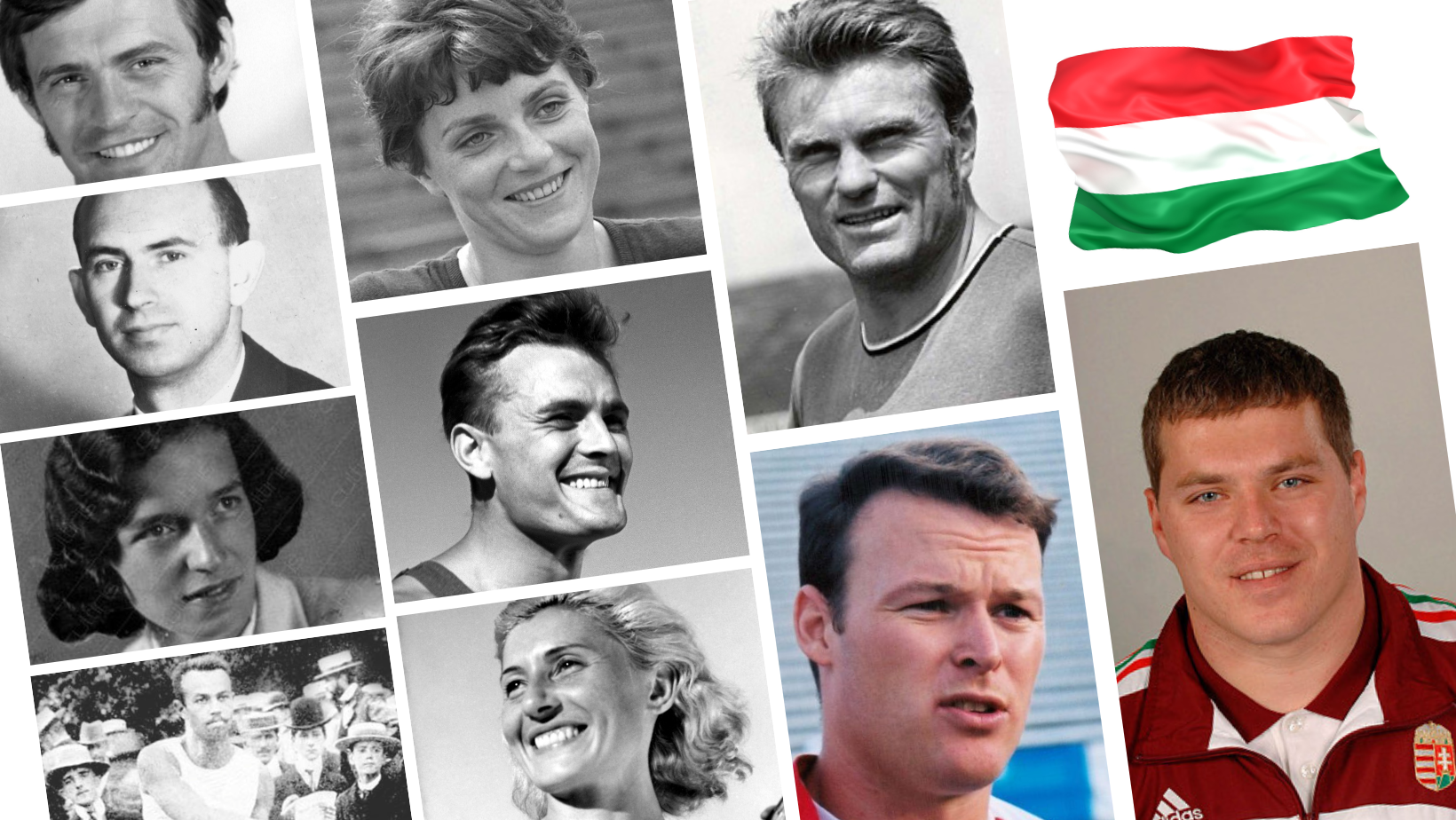 The heroes of Hungarian athletics (© olimpia.hu)

For now, the first Hungarian victory in the history of the World Athletics Championships since 1983 is still to come, but with seven silver and seven bronze medals Hungary has nothing to be ashamed of. In the overall medal table, Hungary is the best of the nations that have yet to celebrate a World Championships title.

The hammer throwing traditions were also strengthened at these events by the performances of Zsolt Németh, Adrián Annus and Tibor Gécsek, who also had the opportunity to stand on the podium. The same is true for Bence Halász, the biggest Hungarian star of our time. He already won a bronze in Doha in 2019, although he was barely 22 years old at the time.

We don't have a World Champs title yet, however the same is not true of the indoor event. Anita Márton reached the top in shot put in Birmingham in 2018. Our world-class athlete won bronze in Rio 2016 and since 2017 she also joined the club of World Championships silver medallists. She has won the European Indoor Championships twice and has twice finished on the podium outdoors. Now she is preparing for one last big showcase at next year's World Championships in Budapest as a mum.

The first European Championships were held half a century before the first World Championships, in Turin in 1934. Munich 2022 was the 25th edition, where Hungary achieved its 65th medals, putting the country in 15th place in the overall medal table.

Two months ago, at the last European Championships, the most successful athletes were Bence Halász, Luca Kozák, silver medallist in the 100m hurdles, and Viktória Madarász, bronze medallist in the 35km race walk. Both ladies set a new Hungarian record to book their place at the next World Championships, which will take place between 19 and 27 August, 2023 at the National Athletics Centre in Budapest.