Not too many people get the chance to be crowned a world champion in front of their friends and family in their home city, and even fewer deliver; but Mutaz Barshim – Doha born and bred – added his name to that small list when he flew over 2.37m to take the high jump gold.

You did not need a decibel counter to realise that the local hero got the noisiest reception of the championships, making the cheers that greeted Dalilah Muhammad’s 400m hurdles world record about 30 minutes earlier on Friday night seem like a murmur.

His popularity is such that he managed to fill the Khalifa International Stadium to the rafters, with poster and placard-waving Qatari fans willing him over the heights.

“I am jumping, and they (the crowds) just showed up, the stadium was full,” he said. “They believed in me, they supported me, and I believe this will spark something, for the nation itself, for the upcoming events.

“Today I saw the joy in people’s eyes. They didn’t believe it, now they do, and I think they will come back,” added Barshim, about two hours after his win and with the stadium finally empty, as he reflected on his status as possibly Qatar’s greatest sporting hero.

In spite of the euphoria, Barshim was also careful not to get too carried away and indulge in too much hubris in the wake of his triumph.

“I am not a legend,” he said. “Sometimes legends are not true.

“But I am really happy. It feels amazing, it feels great. I have won a lot of medals but this one was at home, so it feels different.

“Everybody came here and supported me a lot; I just wanted to do it for them. They are the champions tonight, not me,” added Barshim, acknowledging the crowd’s role in helping make him the first man to win back-to-back world high jump titles.

It was far from a foregone conclusion that the 28-year-old Barshim would retain his title from London two years ago, or even get among the medals, despite his competitive credentials in past big competitions.

No one had dominated this discipline in 2019, unlike Barshim in several previous years since he first came to global attention as a teenager in 2010 when winning his first Asian Games title and the world U20 gold medal that year.

Barshim had jumped no higher than a modest 2.27m this year for equal 31st on the 2019 world list ahead of the IAAF World Athletics Championships, and injury concerns had restricted him to just three meetings prior to Doha, including a 10th place in the IAAF Diamond League final in Zurich at the end of August.

All the aches and pains of the past year or so seemed to disappear once the competition started in Doha.

Apart from making hard work of getting over 2.33m when he needed all three of his attempts, with his first-time clearances at 2.35m and his winning height of 2.37m he seemed not too removed from the Barshim of 2013 and 2014 vintage when Javier Sotomayor’s long-standing world record of 2.45m seemed within his grasp.

“I wasn’t 100 per cent ready, but with all these people cheering for me like this I just forgot everything. I felt like, ‘OK it doesn’t matter what happens tonight, if I injure myself, it’s my last competition. I am gonna push everything out’.

“One year ago, I got off the crutches (following ankle surgery), I took my first step. My injury was very serious, it could have been career-ending; and then you start questioning yourself. It’s normal when you are facing a difficult situation.

“Of course, there was pressure (at these championships), there is always pressure, but I need that pressure to jump. I love to perform in a field where everybody is strong and in front of a big crowd. I think this is an extra push. Pressure in sports can be positive and can actually help you. I needed that.”

After being the only man to clear 2.37m, the first man he wanted to share his delight with was his long-standing coach Stanisław Szczyrba. Barshim divided into the crowd and clambered over several rows of seats to salute the 73-year-old Pole who has been his mentor for more than a decade, having become first guided by him in September 2009.

Of course, after that embrace there was also a long line of local dignitaries to meet and greet, including the Emir of Qatar.

“He (the Emir) was very excited, very happy. I went to see him after the end of the competition, and he said ‘Well done. I have no words to say. You did everything, more than I expected’. He’s really happy, he’s proud and I am proud too.”

In such circumstances, winning in front of your home crowd might entail being rewarded with some extra bonuses from the government but for the moment it looks like Barshim will have to be content with the US$60,000 first prize awarded by the IAAF.

“Nobody has promised me anything. I am not doing high jump for gifts. If I was, I would have stopped a long time ago.

What he does have in the wake of his Doha triumph, though, is the restoration of his credibility as a world-class and feared high jumper ahead of next summer in Tokyo when he will aim to become Qatar’s first ever Olympic gold medallist, which would also complete his collection after bronze in London and then silver in Rio.

If Barshim can win a world title off the back of less-than-ideal preparation, imagine what he’s capable of doing now he can start his 2020 preparations at full fitness. 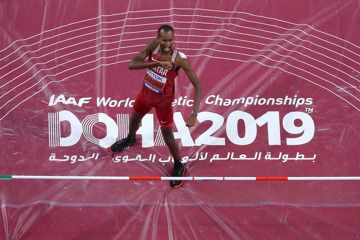