In a town where they talk about ‘Hayward Magic’, it seemed present in astonishing abundance in Eugene on Sunday (24) as Nigeria’s Tobi Amusan and Sweden’s Mondo Duplantis produced scintillating displays of athletic sorcery, breaking world records in their respective events to close out the World Athletics Championships Oregon22 in unforgettable fashion.

Amusan, 25, obliterated the 100m hurdles world record en route to her first global title, clocking a stunning 12.12 (0.9m/s) in the semifinals and a wind-assisted 12.06 (2.5m/s) in the final. She came into the event with a PB of 12.42 but after clocking an African record of 12.40 (1.5m/s) in the heats on Saturday, the world was put on notice that the Nigerian, who was fourth in the Olympic final last year, was capable of something special.

And on a hot, sunny evening at Hayward Field, she duly set the track ablaze in the semifinals, exploding out of the blocks, rocketing down the track and obliterating Keni Harrison’s world 100m hurdles record of 12.20. The only question then: could she possibly repeat it?

With a stronger following wind in the final, making the performance ineligible for records, she clocked a mind-boggling 12.06 to come home in front of Jamaica’s Britany Anderson, who clocked 12.23 to edge silver by five thousandths of a second ahead of Olympic champion Jasmine Camacho-Quinn of Puerto Rico (12.23). USA’s Alia Armstrong was edged off the podium in fourth despite clocking 12.31.

“I believe in my abilities but I was not expecting a world record at these championships,” said Amusan. “It’s a dream come true. I knew I had it in me but I could not believe it when I saw it on the screen after the semis. But it was just a matter of time.”

Later in the night, with the very last act of the championships, the stage was left to a man who has long made the ridiculous seem routine. In the men’s pole vault final Mondo Duplantis had one small blip at 5.87m, which he cleared at his second attempt, but after clearing 5.94m and 6.00m at the first tries his first world outdoor title was assured.

But the all-conquering 22-year-old wanted more. He sent the bar up to a championship record of 6.06m, clearing with room to spare, and everyone knew what was coming next. With the bar at an outright world record of 6.21m, he aborted his first attempt after an imperfect take-off, but the second time around he made no mistake, sailing clear to set his fifth world record, his 48th time clearing six metres – which broke the previous best by Sergey Bubka.

“I did not think about the record that much today,” said Duplantis. “Usually, it is always somewhere in the back of my mind, but today I was really focused on the win and I really wanted to win the gold so badly. You get quite a bit of pressure on you when you’re the only person competing in the entire track. It’s an honour when people stay in their seats and it’s literally only me on the track.”

What’s next now that he has won it all?

“I cannot figure the next heights right now,” he said. “I am going to have a bit time off with my family and my friends.”

Silver went to USA’s Chris Nilsen on countback ahead of Filipino star Ernest Obiena, with both clearing a best of 5.94m.

Elsewhere, USA’s Athing Mu and Britain’s Keely Hodgkinson produced the best head-to-head showdown of the championships and – just as it was in Tokyo – it was Mu who reigned supreme, edging her fellow 20-year-old to the line after a neck-and-neck home stretch duel. Hodgkinson had shot through a gap Mu left on the inside off the final turn but couldn’t quite edge past, with Mu responding and holding her off all the way to the line to win in a world-leading 1:56.30 to Hodgkinson’s 1:56.38. Kenya’s Mary Moraa came through strongly for third in a PB of 1:56.71 ahead of Ethiopia’s Diribe Welteji, who clocked a PB of 1:57.02 in fourth.

“I love competing against other fast women,” said Mu. “I really just wanted to be consistent this year and to continue with the wins that I have been having. Today, it was a little bit harder for me. The next goal is just to continue competing and hopefully to get faster and faster.”

Hodgkinson paid tribute to her rival after the race. “Athing is a great athlete,” she said. “We are both 20 and have many years ahead of us. We'll meet on a world podium again.”

In a field filled with all-time great distance runners, they played it right into the hands of Ingebrigtsen, who possessed a range of gears no one else could answer. The 15-man field was bunched together at 3000m, reached in a pedestrian 8:04.50, and the 2:41 kilometre that followed must have left Ingebrigtsen feeling as if the gold was being individually gift-wrapped for him.

And so it proved. He moved to the lead with a little over two laps to run and responded to every move that came his way thereafter, blasting clear around the final turn, a 53.93-second final lap more than enough to repel all challengers.

“I didn’t want a sprint finish because I wanted to prove I am better than the other guys,” he said. “I wanted and I needed that. It has been very difficult after the 1500m. I knew I would not get beaten by the others in the last laps, but the 5km is a very tough race.”

Germany’s Malaika Mihambo retained her world title in the women’s long jump, though she faced stiff competition from Nigeria’s Ese Brume, who launched herself to the lead in the third round with 7.02m (1.1m/s).

There were some nervous moments for Mihambo after she began with two fouls but, like the champion she is, she produced a 6.98m effort in the third round and swept to the front in the fourth round with 7.09m (0.4m/s), which she lengthened to 7.12m (1.0m/s) in the final round, making it three from three in global outdoor finals since 2019. Brume took silver with 7.02m while Brazil’s Leticia Oro Melo took bronze with a PB of 6.89m, just ahead of USA’s Quanesha Burks, who jumped 6.88m.

“I am having some technical issues, just making the last two steps too long and then did faults,” said Mihambo. “But I knew that I could do it, that I could make a valid third attempt.” 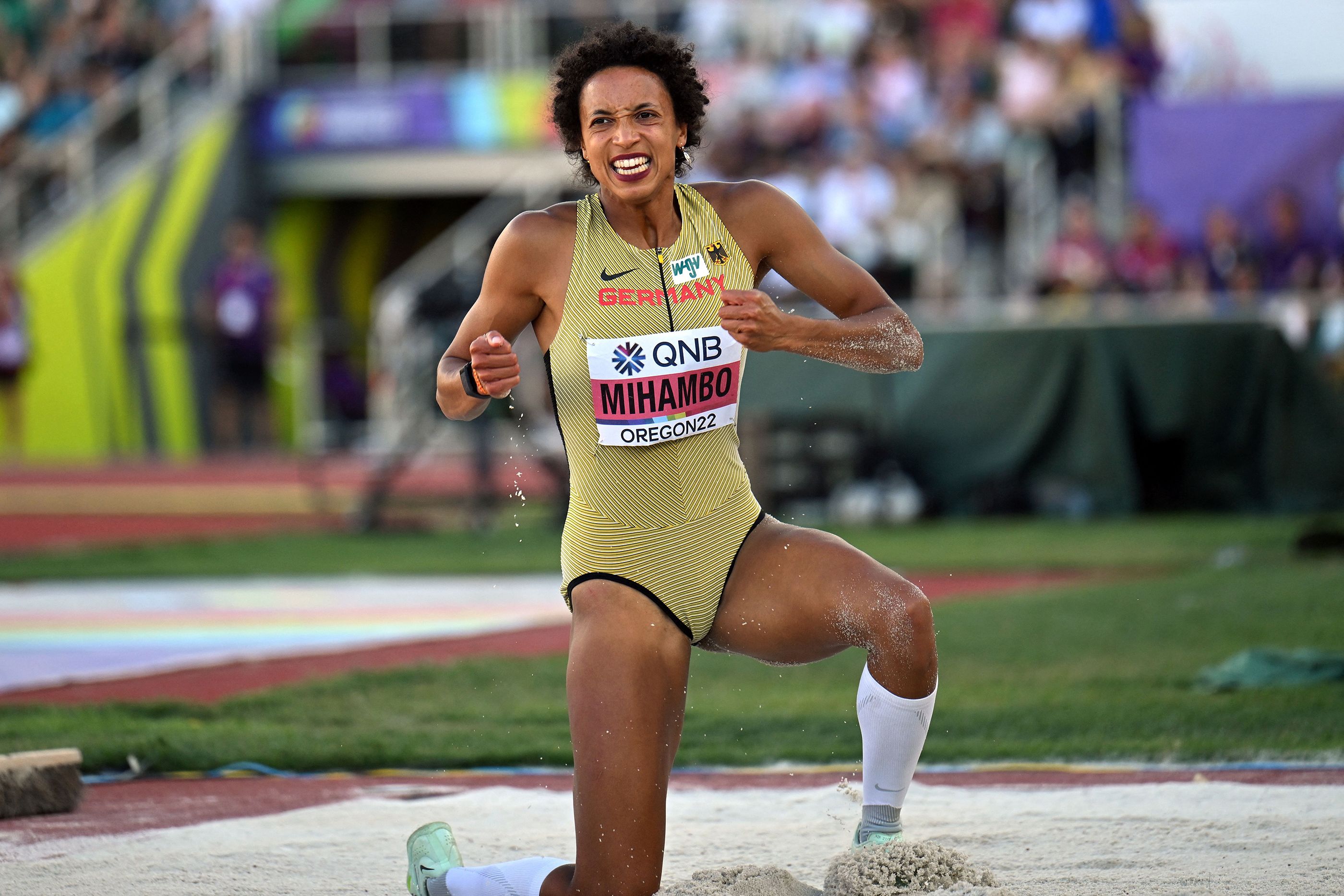 Kevin Mayer of France claimed his second world title in the decathlon with a tally of 8816 points ahead of Canada’s Pierce LePage (8701) and USA’s Zachary Ziemek (8676). Event favourite Damian Warner had withdrawn on day one after pulling up injured during the 400m.

Mayer’s second day began with a 13.92 run in the 110m hurdles and he followed it up with a 49.44m discus throw, 5.40m clearance in the pole vault and a 70.31m effort in the javelin, which left him with a 107-point lead at the head of the standings ahead of the final event. A 4:41.44 1500m carried him to gold, exhausted. Once Mayer had risen to his feet, the world record-holder was asked if he planned to get some sleep after his two days of huge exertion.

Earlier in the day, Italy’s Olympic 20km race walk champion Massimo Stano won the first men’s 35km race walk ever staged at the World Athletics Championships, clocking 2:23:14 to hold off Japan’s Masatora Kawano, who collapsed over the line one second later for silver in an Asian record of 2:23:15.

“You would think being Olympic champion, you could take this win as granted, but it is not,” said Stano. “I am happy to win gold in a different distance and show that I can compete in other distances.”

Sweden’s Perseus Karlstrom, who had won bronze in the opening day’s men’s 20km race walk behind the Japanese pair of Toshikazu Yamanishi and Koki Ikeda, earned a second bronze in a personal best of 2:23:44.

Back at Hayward Field, at the first ever US edition of the World Athletics Championships, there was a fitting finale to the track action as the host nation struck gold in both 4x400m relays.

USA’s men’s quartet of Elija Godwin, Michael Norman, Bryce Deadmon and Champion Allison clocked 2:56.17 to come home well clear of Jamaica, who won silver in 2:58.58 with the aid of a 43.98-second anchor leg by Christopher Taylor. Belgium was just behind them, winning bronze with 2:58.72. Japan set an Asian record of 2:59.51 in fourth.

“It has been a great championships overall for team USA,” said Norman, the individual 400m champion. “Especially on the men's side, after some disappointing championships, it was like a turnaround.” 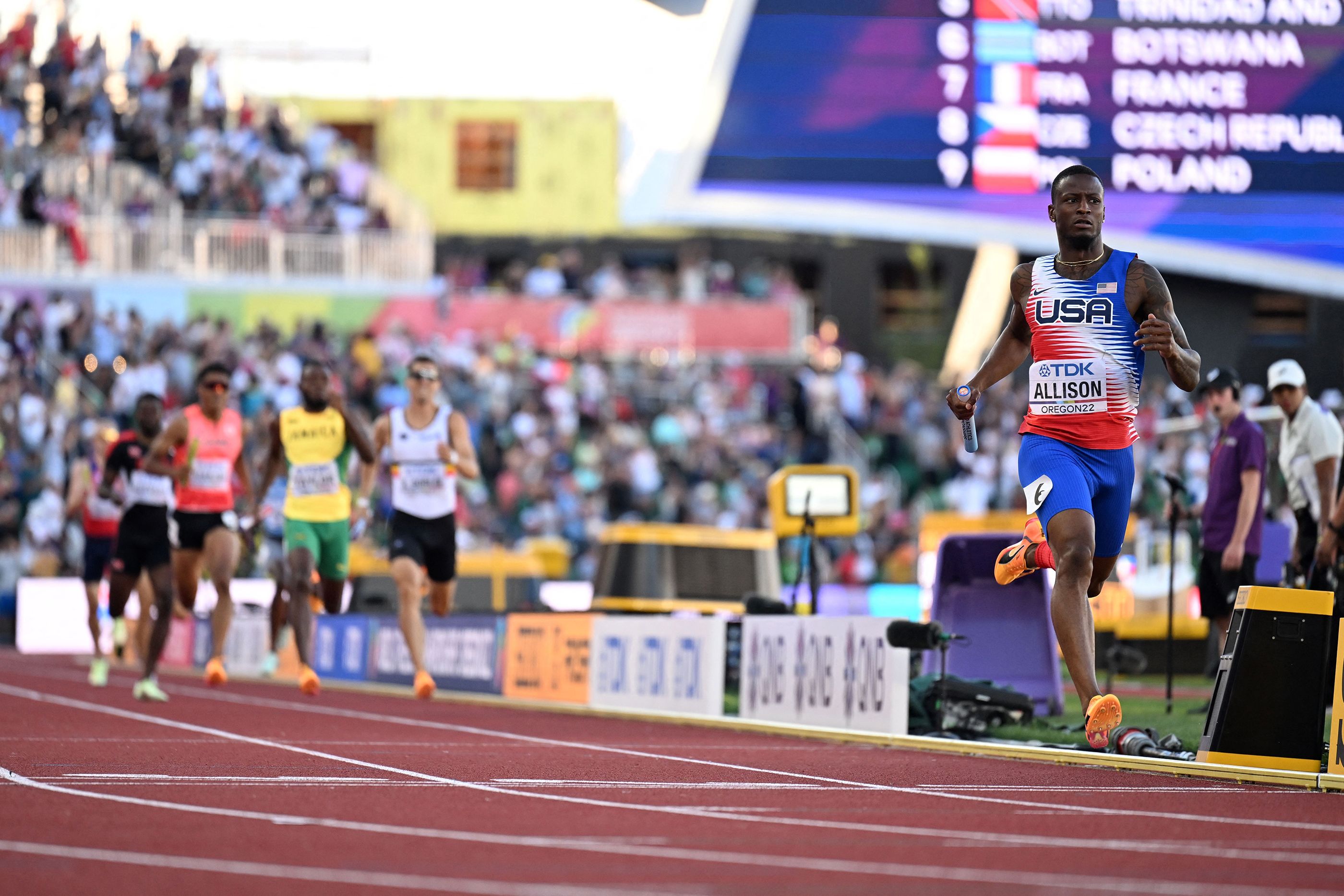 The women’s 4x400m rounded out the track action and in this race, the old phrase about a team only being as strong as its weakest link didn’t quite seem appropriate – not when they had a strongest link like Sydney McLaughlin waiting for the anchor leg, ready to outrun anything that came her way.

As well as Talitha Diggs, Abby Steiner and Britton Wilson ran on the opening three legs – handing the baton to McLaughlin in front – it was the astonishing final lap by the 400m hurdles champion that stole the show, a mind-boggling 47.91 split, which was 1.48 seconds quicker than anyone else in the race.

“It was unreal, we had such a young team,” said McLaughlin. “All these girls are from teams out of college. It was put together at the last minute and to see them all come together after such a long collegiate season, I am so grateful to be part of it. This is the next generation of team USA stepping up to the plate. No better way to end the meet.”