Trailing Canada’s Camryn Rogers (75.52m) and US teammate Janee' Kassanavoid (74.86m) after the first three rounds, the favoured Andersen, the 2022 world leader with a personal best throw of 79.02m in April, took the lead for good with her fourth-round throw of 77.42m (a foul was initially called, but she immediately protested and the ruling was quickly reviewed and overturned), then improved to 77.56m in the fifth round.

After Rogers failed to improve on her final throw, Andersen, introduced by the stadium announcer as the world champion before the last throw of the competition, managed to control her emotions and saved her best for last, reaching 78.96,m the second-longest throw of her career.

Nathan Ott, her long-time coach, said: “Not many people watched this closely but Brooke caged both of her warm up throws. Obviously this was not what we planned or expected. Beyond some technical cues, it was important to convey: relax, breath, and trust yourself.”

He added: “The goal of the first two throws was just to put a fair throw between the lines. Brooke's first throw was similar to her warm ups but she guided it to the sector, at nearly 75m. It was an excellent start; maybe enough to medal. The plan was to build from there but the second and third throws were too fast and not connected, resulting in a foul and a 72m.

"At this point, Brooke had fallen to third place and was understandably frustrated. We spoke twice in the time between throws three and four. A technical cue was important but more importantly the nerves had settled and the switch had flipped. She was visibly more dialed in, telling herself that she had this.

"Brooke's fourth throw was much better but was called as a foot foul. Thankfully it was quickly reviewed and overturned: 77.42m. This moved Brooke to the top spot but because we have such respect for the field of athletes, the message was we still needed to improve and respond. Put better throws out there. The final two throws were Brooke being Brooke, showcasing all her development this year. This win validates all the belief and trust in herself as well as in me and the training plan. There are always uncertainties no matter how well prepared you think you are.”

The 26-year old Andersen said after the event: “It hasn't really quite set in yet. I was looking out across the field and I thought to myself, I'm a world champion. I'm just very fortunate to have the competition I did have. I knew if I stayed in it and focused on the little things I could control, hopefully the performance would get better and (earn) a gold medal.

"I will just remember shaking everyone's hand, taking pictures with my supporters. I appreciate them to the max – my country, my coach, myself, family, supporters. I thank everyone who has helped me get to this point in my career.”

It was a third consecutive global championships for Andersen, the fourth best thrower in history. She didn’t make the final at the 2019 World Championships while dealing with an injured hip, and was 10th at the Tokyo Olympics. She was also third at the 2018 NACAC Championships in Toronto, Canada, and was the silver medallist at the 2019 Pan American Games in Lima, Peru. She won her first US title in June of this year.

It had been a challenging pandemic year leading up to the Olympics for Andersen. Much of her training had taken place in a public park, throwing from a sidewalk. Since the nearby community centre had been turned into a vaccination centre, she started getting more spectators.

“Most people are just excited and they liked to watch me while they’re waiting in line for their vaccines,” she said. She also hurt her shoulder and suffered a concussion when she took a fall in April 2021.

As a youngster, her first passion was football, playing for 14 years in youth leagues and at Rancho Buena Vista High School in Vista, California. She wanted to be the next Mia Hamm, who was a star on the US football teams that won two Olympic and two World Cup titles.

When she joined the track team in her first year in high school, she wanted to try the long jump and sprints, but her coaches decided she’d be more suited for the shot put and discus. She tried those events for awhile before turning her attention to the javelin (for about three weeks) and eventually to the hammer. She would often attend practice sessions for the hammer and football on the same day.

Her performances in the throws didn’t merit many scholarship offers from college coaches in the US, but she eventually accepted a modest package from Northern Arizona University in Flagstaff. It was there that she started to blossom under the watchful eye of coach Ott, who started her on a weight training program that would eventually lead to a gain of 27kg of muscle to her frame.

She threw 59.37m in her first full year in the hammer in 2014, and has shown steady improvement ever since then:

She would finish second at the 2017 and 2018 NCAA Championships and followed coach Ott when he switched from Northern Arizona to Kansas State, and then again when he took a coaching position at Grand Canyon University in Phoenix, Arizona, where she serves as a volunteer assistant coach.

As for the future, Ott said: “Beyond this season we are looking to keep improving. Brooke is still young and has plenty of room to develop further. 80m is a real possibility soon and once you are there, the AR and WR are the next goals.”

And her 2022 season is not done yet, with competitions planned in Poland and Hungary, as well as at the NACAC Championships in The Bahamas.

Andersen, who recently signed a multi-year deal with Nike, outlined her own goals, both as an athlete and beyond: “Hopefully in my career I can win more medals and especially an Olympic medal. In the distant future I've thought about coaching and giving back to the sport that gave so much to me.

"I also majored in Environmental Science Management and International Forestry and minored in Biology and Business. I would really love to one day become a conservationist or marine biologist. I've been wanting to do that ever since I was young - growing up so close to the ocean, I just have a deep love for sea life and marine animals."

BACK
Pages related to this articleAthletes
Brooke ANDERSEN 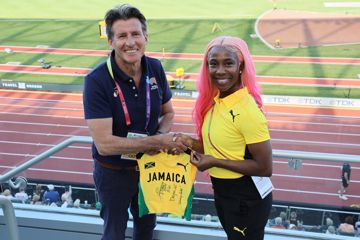 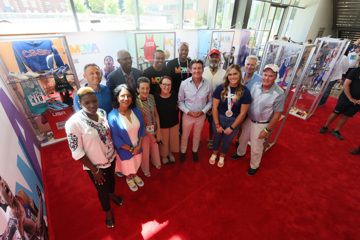