Cheptegei, Andersen and Tola triumph on third morning in Oregon

Joshua Cheptegei on his way to 10,000m triumph in Oregon (© Getty Images)

There was no let up on the drama at the World Athletics Championships Oregon22 as the day three morning session concluded with a thrilling sprint for victory in the men’s 10,000m final. On Sunday (17), Uganda’s Joshua Cheptegei held on to the title he won in Doha three years ago to join Haile Gebrselassie, Kenenisa Bekele and Mo Farah as a back-to-back winner of the 25-lap event.

There was also a flying finish to the women’s hammer, though Brooke Andersen had already secured a home gold for the Hayward Field fans to celebrate – and a second US throws title, following Chase Ealey’s shot success on Saturday – before applying the icing on the starred and striped cake with the best effort of the competition, 78.96m.

Earlier in the day, there had also been fireworks on the streets of Eugene, Ethiopia's Tamirat Tola taking the men’s marathon title in a championship record of 2:05:36.

Like the women’s 10,000m final on Saturday, the men’s race was a slow burning affair with a dramatic denouement.

There were eight men still in contention at the bell, at which point Cheptegei – who had dictated most of the pace from the front since halfway – regained the lead and steadfastly remained.

In the Olympic final in Tokyo last year, the 5000m and 10,000m world record-holder had been beaten for pace on the last lap by Selemon Barega. Twelve months on, he thwarted the Ethiopian’s challenge with a final circuit of 53.42.

Poised to strike off the final bend, Barega faded to fifth as Cheptegei sprinted to victory in 27:27.43. Kenya’s Stanley Mburu, who had fallen on the opening lap, took silver in 27:27.90, with Cheptegei’s Ugandan teammate Jacob Kiplimo winning the race for bronze ahead of US hope Grant Fisher. 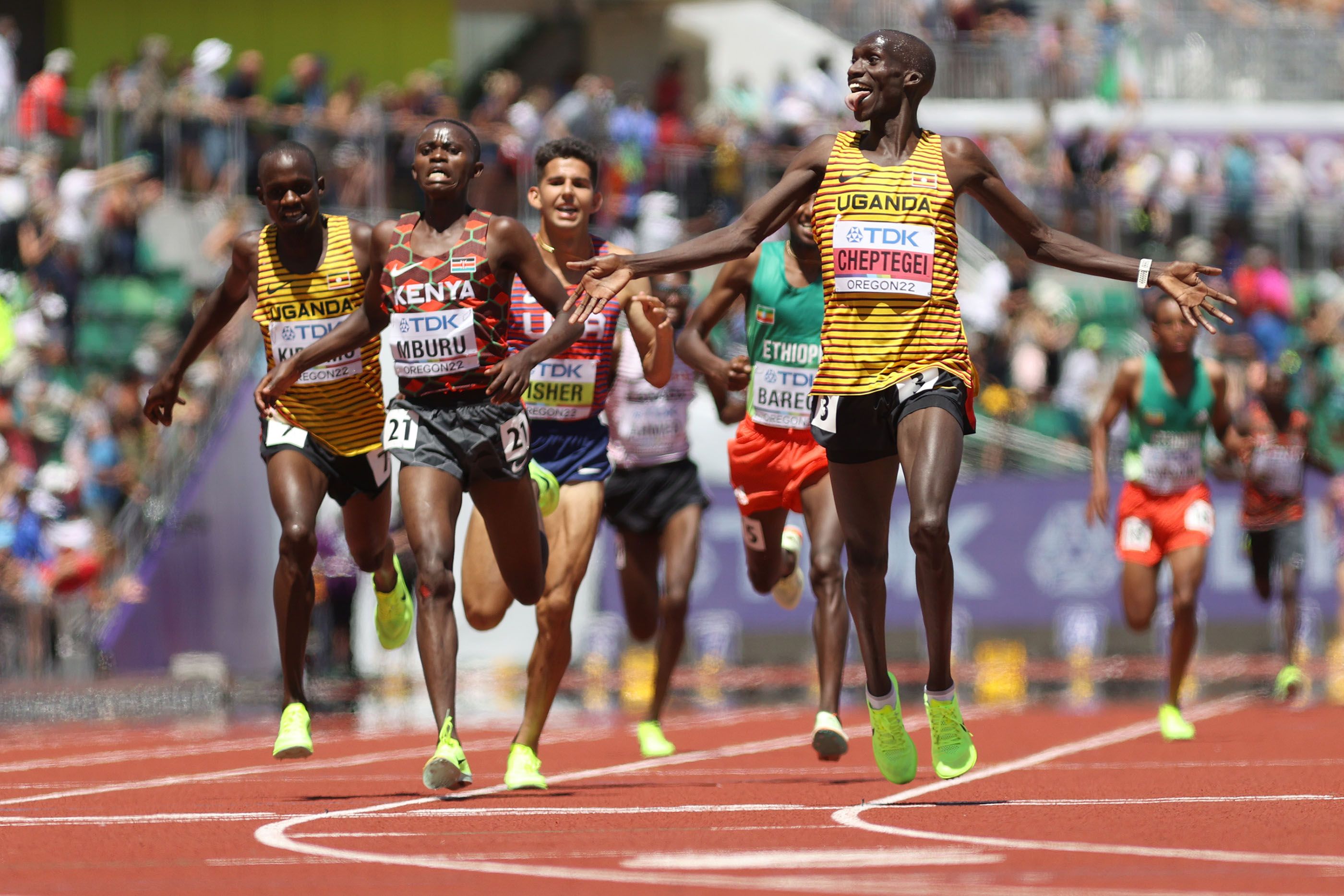 For the deserved victor, it was a poignant return to Hayward Field, the scene of his first international 10,000m triumph, at the World U20 Championships eight years ago.

“It was very emotional for me to come back to the USA, to the place where I started my international career in 2014,” said Cheptegei.

“It was really hot today and the conditions were really challenging, but nevertheless I prepared myself for something challenging. I knew I could control the race and speed it up.

“This means a lot to me. I want to continue my dominance in long distance running.”

Starting with the challenge of making it a distance double in the 5000m later in the week, he might have added.

Opportunity came knocking in the women’s hammer, in the absence of Poland’s Olympic champion and long-time dominant force Anita Wlodarczyk, injured while apprehending a car thief, and of 2019 champion DeAnna Price of the US, suffering from Covid.

The call was answered in emphatic fashion by Andersen.

A native of San Diego, the Pan American Games silver medallist took the lead with 74.81m in round one and held her nerve over the course of the next two rounds as first US teammate Janee' Kassanavoid (74.86m) and then Canada’s Camryn Rogers (75.52m) pushed her down the order.

Andersen drew a red flag with her fourth round effort but successfully argued against it and regained the lead when her effort was measured as 77.42m. To remove any doubt, the 26-year-old followed up with 77.56m in round five before finishing with her 78.96m flourish – just six centimetres down on her 2022 world lead.

“It hasn't really quite set in yet,” said Andersen, whose final throw was greeted by a huge Hayward Field roar. “I was looking out across the field and I thought to myself, ‘I'm a world champion.’

“I'm just very fortunate to have had the competition I did have. I knew if I stayed in it and focused on the little things I could control, hopefully the performance would get better and be a gold medal.

“I will just remember shaking everyone's hand, taking pictures with my supporters. I appreciate them to the max: my country, my coach, myself, family, supporters.

“I thank everyone who has helped me get to this point in my career.”

Rogers was only marginally less emotional in taking silver with her 75.52m. “Being able to bring home this medal means the world to me,” she said.

For the second World Athletics Championships in a row, the men’s marathon produced a 1-2 for Ethiopia.

This time the knock-out blow was provided by Tola, who floored the lead pack with a decisive break at 32km and a final 10km split of 28:31 on the last of three loops through Eugene and Springfield.

The 30-year-old, who took silver in the event behind Kenya’s Geoffrey Kirui in London in 2017, was rewarded with a winning time of 2:05:36 – a major improvement on the championship record figures of 2:06:54 held by another Kenyan Kirui, Abel, in Berlin in 2009.

In the men’s marathon in Doha in 2019 Mosinet Geremew finished runner up to Lelisa Desisa, and three years on he had to settle for another silver behind a victorious Ethiopian teammate, also finishing inside the old championship record with 2:06:44.

Belgium’s Bashir Abdi claimed third spot in 2:06:48 – Europe’s first medal since the bronze won by the Swiss runner Viktor Rothlin in Osaka back in 2007 – ahead of Canada’s Cam Levins, fourth in  a national record 2:07:09, and three-time world half marathon champion Geoffrey Kamworor of Kenya, fifth in 2:07:14. Defending champion Desisa dropped out at 29km.

There was a brilliant performance by the Mongolian marathon man who has been a fixture of the event at the World Athletics Championships since 2003.

Running in his 75th marathon overall, and his 10th in a row at the World Athletics Championships, the veteran achieved his second highest ever finish in a global event – behind his 19th place in Daegu in 2011.

Bat-Ochir spent three years living and training in the north-east of England in preparation for the 2012 Olympics in London, running for Morpeth Harriers with guidance from 1966 Commonwealth marathon champion Jim Alder, who holds one of the oldest world bests in the book.

After missing selection for the Olympic marathon in Tokyo in 1964, the Scotsman ran a two-hour world track best of 37.994km. The 58th anniversary of Alder’s unbeaten mark falls on 17 October.

Nafi Thaim got off to a flying start in her bid to regain the women’s heptathlon title. The two-time Olympic champion improved her lifetime best from 13.34 to 13.21 in the opening heat of the opening event, the 100m hurdles. 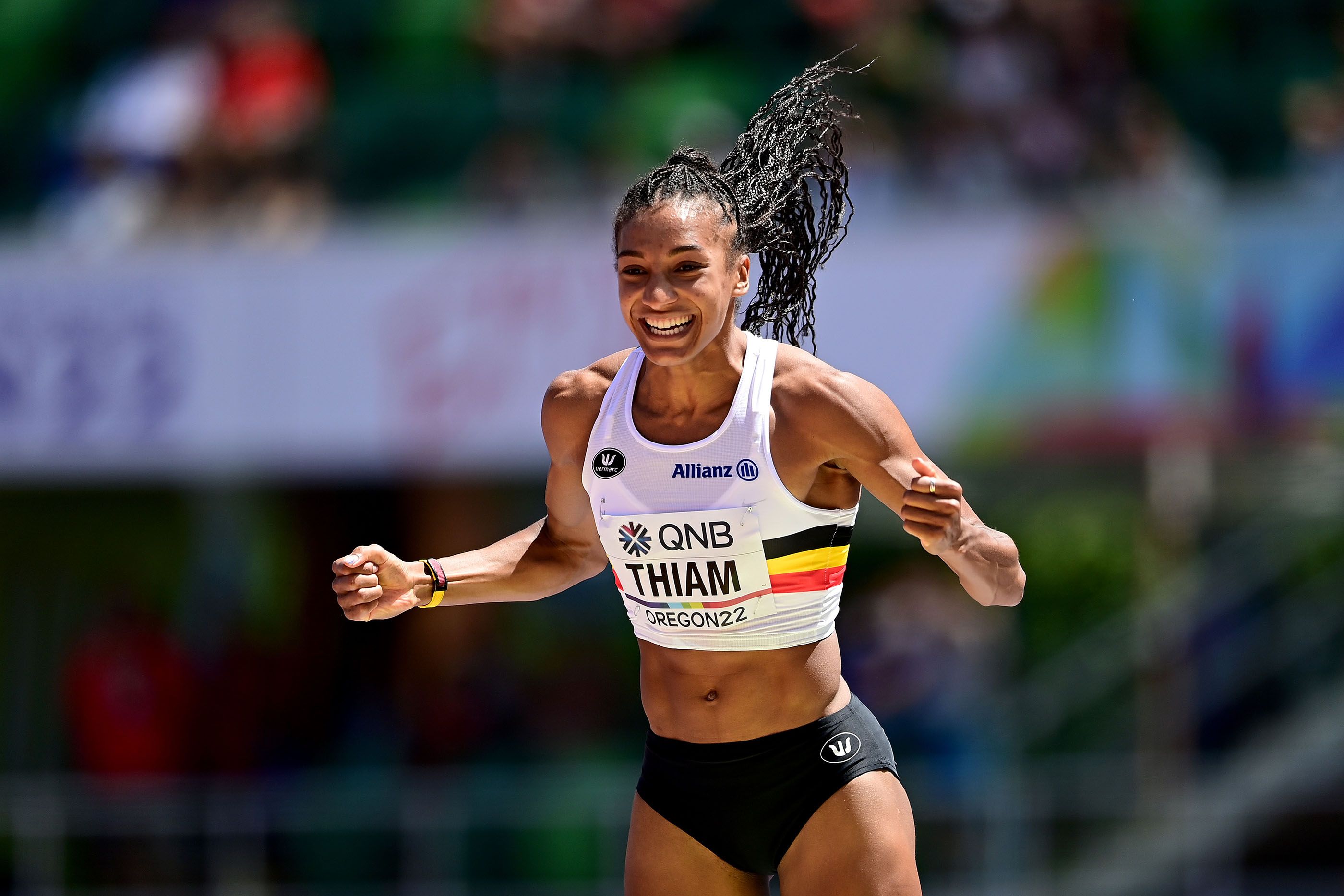 Down in fifth in that race, in 13.54, was Britain’s defending champion Katarina Johnson-Thompson, still a long way from her best after suffering a ruptured achilles in 2020.

Thiam followed up with a 1.95m clearance in the high jump, equalling the championship event best, and a 15.03m season’s best in the shot to lead the field with 3127 points after the first three of the seven events.

In the men’s 400m heats, Wayde van Niekerk showed a glimpse of his blistering form of old as he blitzed through the opening 200m of the opening heat in 21.39.

The South African, who turned 30 last week, eased off the gas in the home straight but still finished a comfortable winner in 45.18 – a long way from the 43.03 world record he clocked at the Rio Olympics in 2016, but an encouraging performance on the long road back from the potentially career-threatening knee injury he suffered in 2017.

The fastest time came in the penultimate of the six heat races, Bayapo Ndori of Botswana shaving 0.01 off his lifetime best with 44.87. A member of Botswana’s silver medal-winning 4x400m quartet, the 23-year-old was marginally slower than Van Niekerk at halfway (21.46) but finished well clear of 2011 champion Kirani James, the Grenadian content to remain in his comfort zone with 45.29 in second place.

Another first-half blitzer (21.47) was Matt Hudson-Smith, the resurgent two-time European champion from Britain easing off to win the final heat in 45.49.

Twice a 400m runner-up at the World Athletics Championships but never a winner, Olympic one-lap champion Shaunae Miller-Uibo of The Bahamas opened her quest for her conspicuously missing gold with a comfortable heat victory in 51.10. 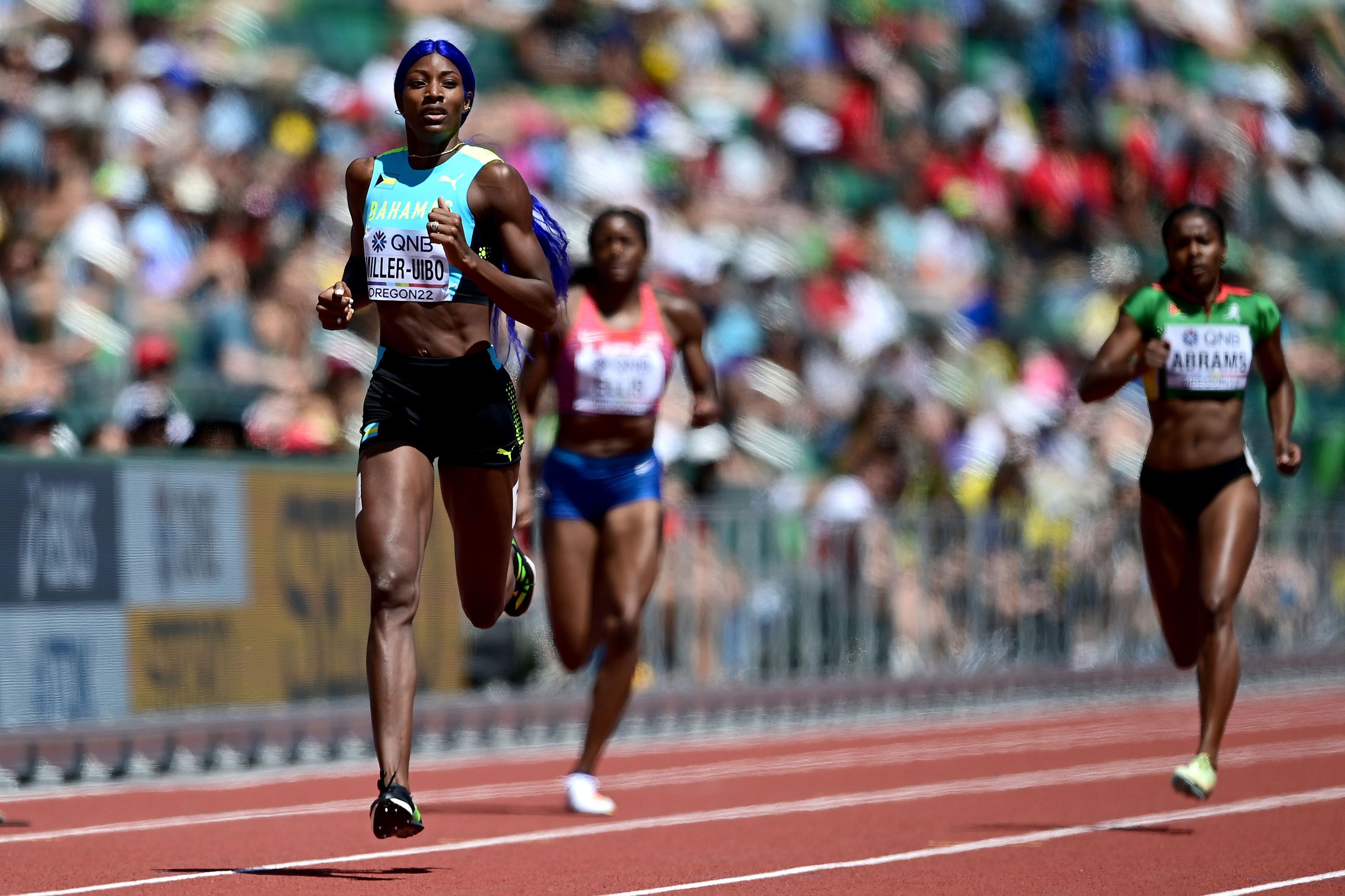 Already a silver medallist from the mixed 4x400m on Friday, Lieke Klaver set a Dutch record of 50.24 for third place in the closely-contested second heat, behind Jamaica’s Stephenie-Ann McPherson (50.55) and Poland’s Natalia Kaczmarek (50.21).

Olympic silver medallist Marileidy Paulino, whose scorching second leg (48.47) helped the Dominican Republic to gold in the mixed 4x400m, won her heat in 50.76, with Irish teenager Rhasidat Adeleke an impressive runner-up in 51.59.

Fiordaliza Cofil, who anchored the mixed Dominican team to victory, won her heat in 51.19, with another 19-year-old in her slipstream, NCAA champion Talitha Diggs taking second place in 51.54.

There was a familiar qualifier from the final heat. Britain’s Victoria Ohurougu, younger sister of 2007 and 2013 champion Christine, progressed to the semifinals with 51.07 for third place behind Poland’s Anna Kielbasinska (50.63) and Candice McLeod of Jamaica (50.76). Sada Williams was the other heat winner, the Barbadian clocking 51.05. 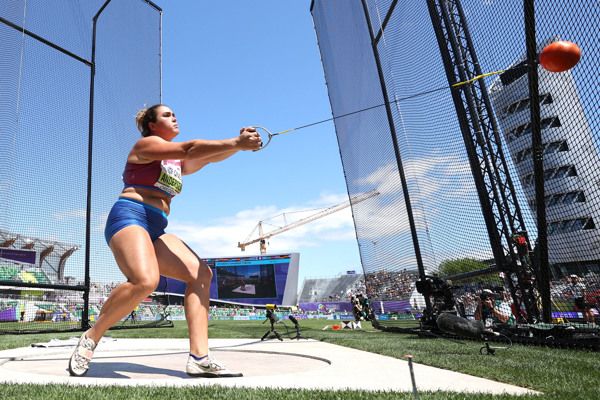 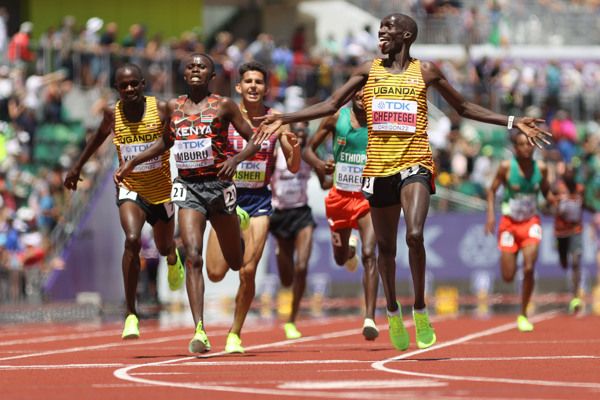 Cheptegei leaves rivals with no response to r... 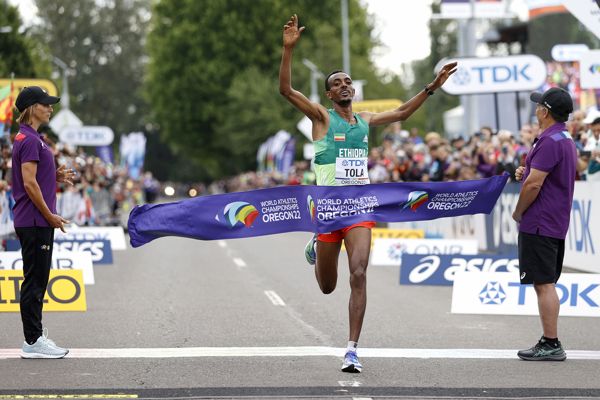