25 March 2001 - Dathan Ritzenhein's bronze medal here today, behind Ethiopia's Kenenisa Bekele and Kenya's Duncan Lebo in the Men's Junior race at the World Cross Country Championships in Ostend was one of the biggest surprises of this 29th edition of the Championships.

The last time an American Junior stepped on the podium in a World Cross Country Championships was back in 1981 when Keith Brantly grabbed bronze in a hotly disputed race where the three medallist finished in less than three seconds. Craig Virgin won gold in the senior men's cross the same year, becoming the last American male medallist until today.

The last time the American flag was raised at a World Cross Country championships was in 1993 when Lynn Jennings won the bronze medal in Amorebieta, Portugal after three consecutive victories the previous years.

It has taken eight years for the USA to see one of their athletes step on the World Cross Country Championships today in Ostend in a race that was characterised by the freezing wind and the mud which made the course even more demanding.

"Maybe the difficult weather conditions helped me defeat the African runners. I was not afraid of them simply because I didn't know what to expect from this race. Of course I knew they are excellent cross country specialists but I had never personally raced against them," said Ritzenheim after the race.

Michigan born Ritzenhein followed the pace set by Ethiopia's Bekele – who had finished second in the short race yesterday and completely outclassed the rest of the field - from the start, accompanied by hs compatriot Mathew Tegenkamp.

"Me and Matt decided to work together in front. We wanted to try and do a team race. I don't know yet what the other American runners have done but I am happy that myself and Matt have run such a great race," said Ritzenhein at the post event press conference.

And Ritzenhein's determination was noticeable when one after the other Kenyan and Ethiopian representatives gradually lost ground, leaving the two Americans and two Kenyans (Lebo and Kemboi, who would finish 4th) fight for a medal after Bekele had broken away from the pack with one lap to go. "Before the race I thought to myself: you have to take your chance, you have to gamble and if you die at the end well you die but at least you will have tried."

Not only did Ritzenhein not die but he managed to outsprint Kemboi for what would be USA's only individual medal of the championships. Unfortunately Ritzenhein's third and Tegenkamp fifth places were not sufficient to guarantee a medal in the team standings: the USA finished fourth, three points behind Uganda, Kenya and Ethiopia.

"I am very disappointed with the team missing a medal by such a small margin," said the youngster. For Ritzenhein, team support appears to be vital in his preparation and motivation. He likes to underline: "I get my inspiration from my team, Radford team in Michigan."

A two-time national cross country champion, Ritzenhein plans to run the 5000 on the track this summer. As a junior, in 2000, he clocked 8:41.10 for two miles, faster than the likes of Steve Prefontaine or Adam Goucher. Ritzenhein who will attend Colorado University this fall will have to confirm his excellent result on track during the summer, by which time he will probably have realised what a great performance he has accomplished.

"Everything happened so fast today I still don't know what I should be thinking about it. I need to sit down on my own and I might eventually realise what I have done."

BACK
Pages related to this articleDisciplines
Two Miles

n a masterful show of strength and resistance, Belgium’s Mohammed Mourhit gave the Belgian organisers of the World Cross Country Championships the best possible reward for their efforts as he successfully defended the world cross country title he won in Vilamoura last year

Report from the Men's junior race in the IAAF World Cross Country Championships in Ostend, Belgium 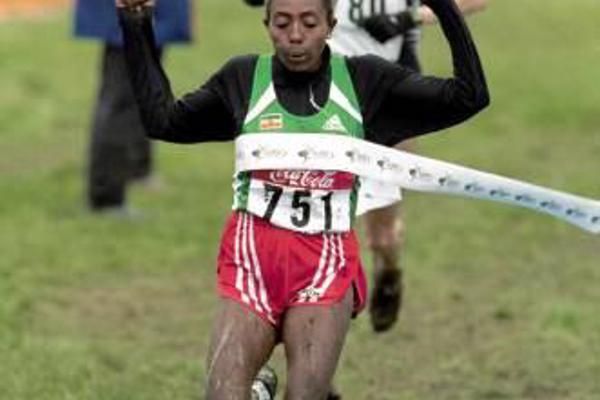 Gete Wami showed that she had learned her lessons well from defeat of the previous day when she sprinted past Paula Radcliffe in the final 100 metres to win the IAAF women's short-course cross-country here in Ostend on Sunday.