Loroupe hopes for golden return in Brussels
2 May 2002 – Brussels, Belgium – When Kenya’s three-time World Half Marathon Champion Tegla Loroupe lines up in Brussels’ Grand Place on Sunday at the start of the 11th edition of the championships, there is little doubt that her mind will flip back to the day nine years ago when she competed here to win her first major championships medal – the bronze in the 2nd IAAF World Half Marathon Championships.

On Sunday, though, Tegla will be hoping for a better result than on that October day in 1993: “I slipped a couple of times on the carpet they had laid down near the finish,” she recounts, “up until then I had been in the lead.”

Since then, Loroupe has done much better in the Half Marathon World Championships, adding three global titles in the event (Kosice 1997, Uster 1998 and Palermo 1999) to become the first athlete ever to have scored three back-to-back victories in this demanding competition.

Loroupe has passed through a lackluster period since that victory in Palermo, which has seen her fail to satisfy the Kenyan selectors for the past 2 editions. She has suffered from recurrent back problems and has been well off the spectacular form that saw her set two world bests in the marathon and complete a Half Marathon/Marathon/World Half Marathon triple in the space of ten days in 1999 – a year when many observes thought that the tiny Kenyan had overstretched even her capabilities.

But speaking just two days before Sunday’s competition, Tegla is confident that she has returned to her earlier form and has a fighting chance of yet another title in Brussels on Sunday. “I really feel a lot better now,” she said by telephone on her way to a training session in Detmold, Germany.

“I competed in a 4km race in Switzerland the other day as part of my speed work and ran 13:27 and I have been training without any problems at all.”

Loroupe’s only major competition this year has been the Nagoya marathon, where she finished seventh in a somewhat pedestrian 2:31:17 – “but I was just jogging towards the end,” she tells us, “I was not meant to finish the race, but I felt Ok so I decided to finish the course.”

Despite feeling happy with her own form, Tegla does not discard the competition; especially her Ethiopian rival Berhane Adere, who she feels is likely to be her major challenger on Sunday. “ I think Adere is very strong,” she says, “but there is also Susan (her training partner Susan Chepkemei) and Marleen Renders ran very well in Paris just a month ago.”

Loroupe’s victory in Palermo in 1999 has already put her in the distance running history books, another victory in Brussels would likely make that entry indelible.

“Let’s just say that I feel good and we will see how it goes on the day!” is the Kenyan’s response. 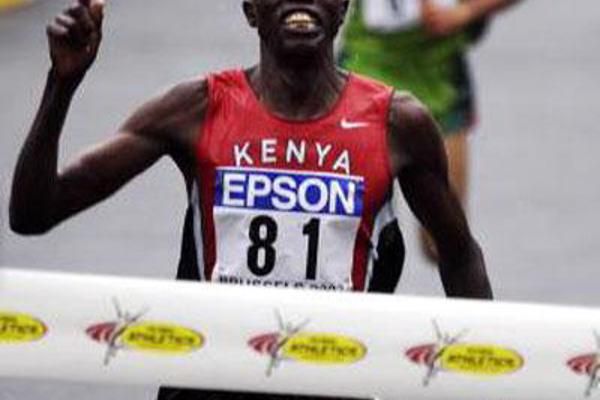