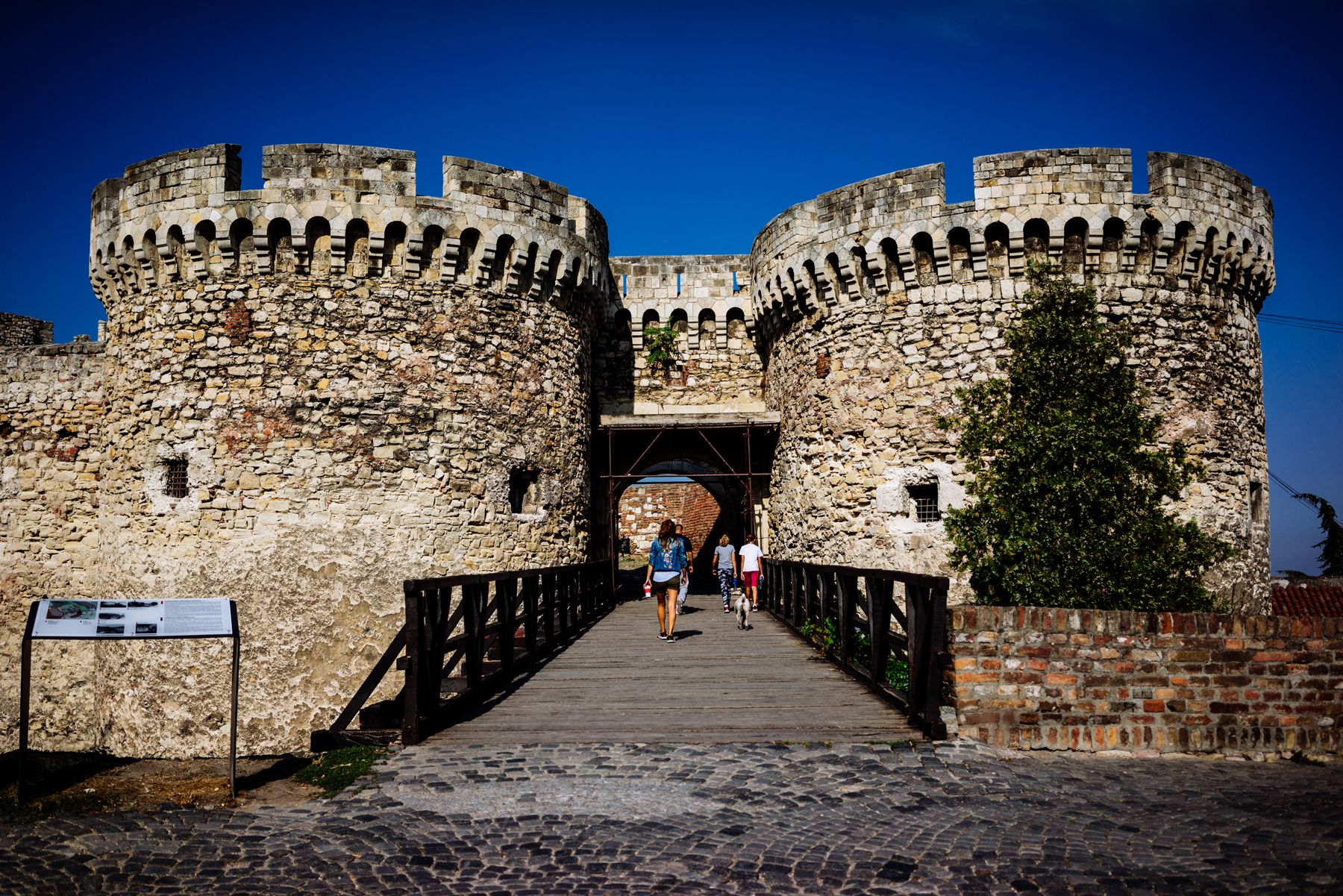 This fortress, constructed throughout the 1st to the 18th century with the aim of being a strategic place for defence on the hill above the confluence of the Sava and Danube rivers, today represents an outdoor museum. The Pobednik Monument (The Victor) which is the symbol of Belgrade, is the focal point of the entire area which is made up of the Belgrade Fortress, divided into the Upper and Lower town, and Kalemegdan park.

Don’t miss out on seeing the Roman Well, the Great Gunpowder Warehouse, the Military Bunker and the Clock Tower on your walk. Take a look at the numerous exhibitions in the Military Museum, the Nebojša Tower and the Museum of Natural History. The Great Kalemegdan Staircase will bring you to a place with a breathtaking view over the Sava and Danube confluence, of Novi Beograd and Zemun. Down the landscaped path you can see many sculptures from the turn of the 20th century, erected in honor of writers, composers, and other public figures. 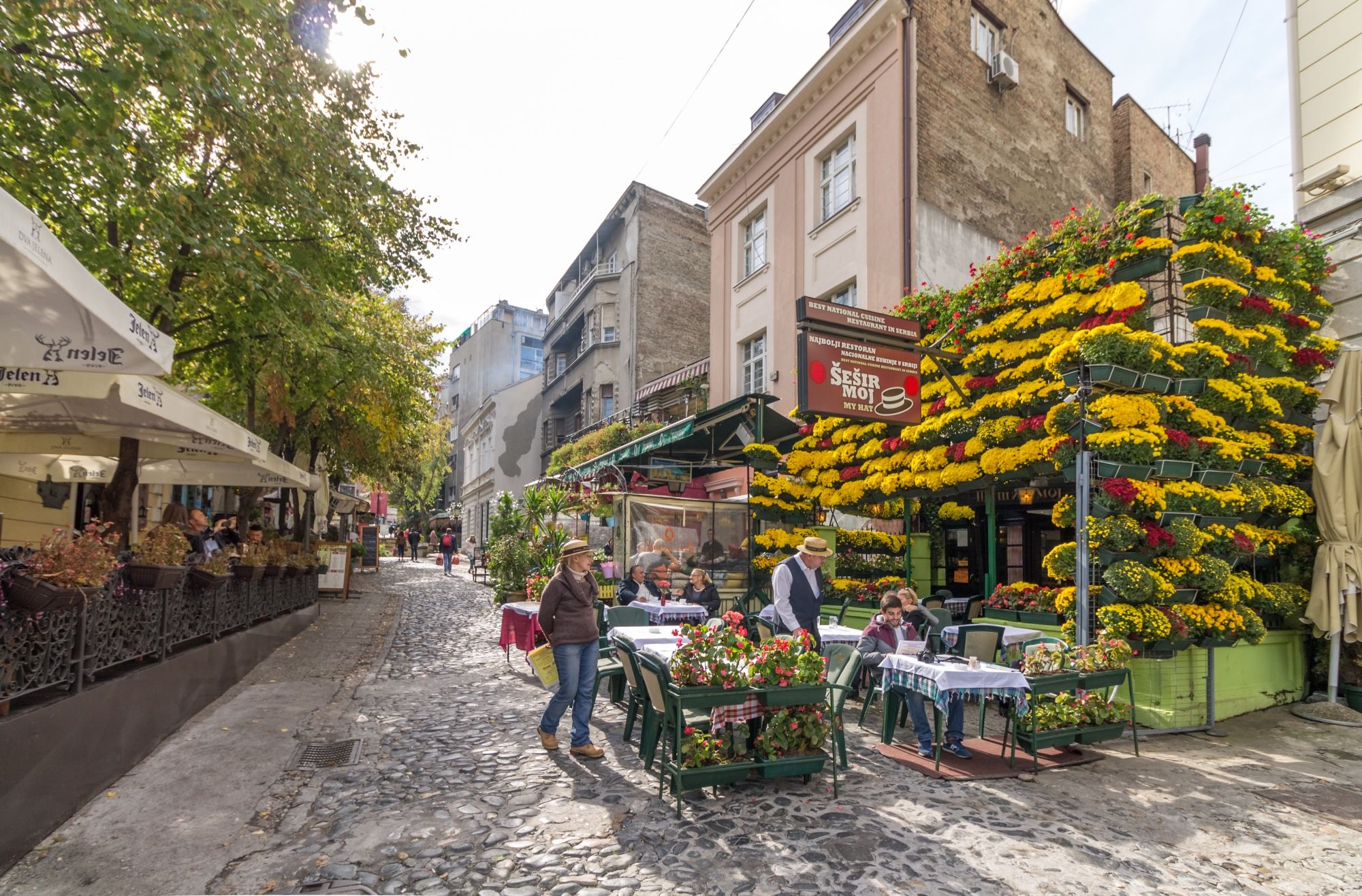 Even though there’s no gateway coming up to Skadarlija, when you enter this street from the hustle and bustle of busy Belgrade, it is as if the gates from a past time open and lead you into this corner where you can feel the historical atmosphere. Belgrade citizens and guests alike excitedly come to spend their nights in this cobblestoned street with the aim to experience the essence of a past time. Skadarlija became a bohemian part of the city at the turn of the 20th century when actors, writers and painters moved there, and the taverns of Skadarlija became the gathering places of the most famous individuals who were part of Belgrade culture.

The house where the well-known Serbian writer and painter Đura Jakšić spent his life was turned into a meeting point for poets during their nights in Skadarlija. This Belgrade quarter is compared to the Montmartre in Paris in terms of appearance and the cheerful arty atmosphere. In present day, restaurants of Skadarlija boasting traditional specialties, the sounds of urban traditional folk music and the greetings you will receive from the lady of Skadarlija will help you experience the atmosphere of the bohemian Belgrade from the past. 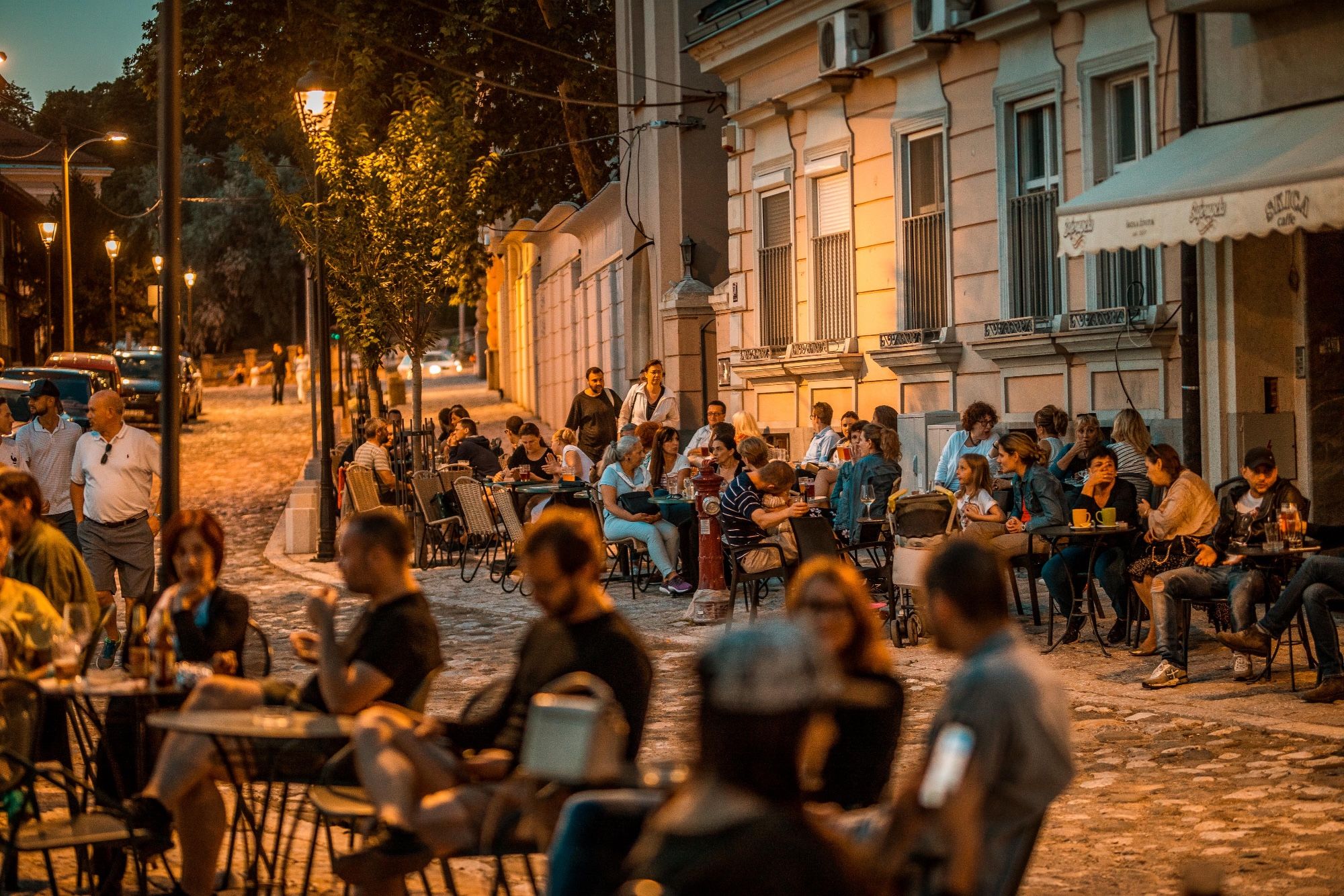 Tucked between blocks of modern buildings, Kosančićev venac has partially preserved the atmosphere of the 19th century with its cobbled streets, gardens and old-fashioned buildings. The whole neighbourhood is interspersed with small cafés overlooking the river, as well as cozy wineries.

It has got its characteristic image from the structures which were built in both Balkan and oriental styles and have preserved the spirit of old-fashioned Belgrade: the Residence of Princess Ljubica and the oldest tavern in Belgrade, The Question Mark, in which even today the guests sit on three-legged chairs and low sofas and enjoy traditional Serbian cuisine. In the vicinity of Kosančićev venac, you will find the Orthodox Cathedral and across the street, the Building of the Patriarchate, built in both Serbian and Byzantine styles, houses the Museum of the Serbian Orthodox Church whose permanent exhibition illustrates its history. Even today, people say that Zemun represents a city within the city. The symbol of Zemun is the Millennium Tower on Gardoš Hill, located in the central part of the oldest preserved fortress from the 14th century. The Tower, widely known as the Tower of Janos Hunyadi, is open for visitors every day. The most interesting part of the Tower is the balcony with a viewpoint from which you can enjoy the panoramic view of the city during bright winter days.

Old Zemun attracts many visitors with its narrow streets and old buildings from the period of Austro-Hungarian rule, traditionally hospitable people, authentic cuisine and cozy atmosphere in its restaurants. We suggest you take a walk during the day on the always crowded Zemun promenade, along the Danube bank, where you can relax, as well as taste fish specialties and have a good time listening to urban traditional folk music.

Now officially one of the three most beautiful city islands in the world, Ada on the Sava river, connected with the right bank by two isthmuses creating Sava lake in the process, is the most visited swimming place and playground in Belgrade.

This green oasis near the center of Belgrade, known as the 'Belgrade sea', is surrounded by forest, countless cafes, restaurants, cycling tracks and sports fields and it is lively throughout the year. Walk the round path around the lake even during winter, visit the open ice rink, and then warm up with a hot beverage in one of many cafes and restaurants. You will see the monumental structure of St. Sava Church from whatever side you approach the center of Belgrade. It was erected on Vračar hill and it is one of the largest orthodox churches in the world. It was built where, according to legend, the remains of St. Sava, the most significant Serbian saint, the first archbishop and founder of the Serbian Orthodox Church from the 13th century, was burned during the Turkish rule.

The monument to Karađorđe dominates in front of the Church, as does the building of the National Library of Serbia, with the most extensive book collection in the Balkans. The magnificent fountain in front of the Church provides the space with a special charm and it is the favorite meeting place for the citizens and visitors of Belgrade. 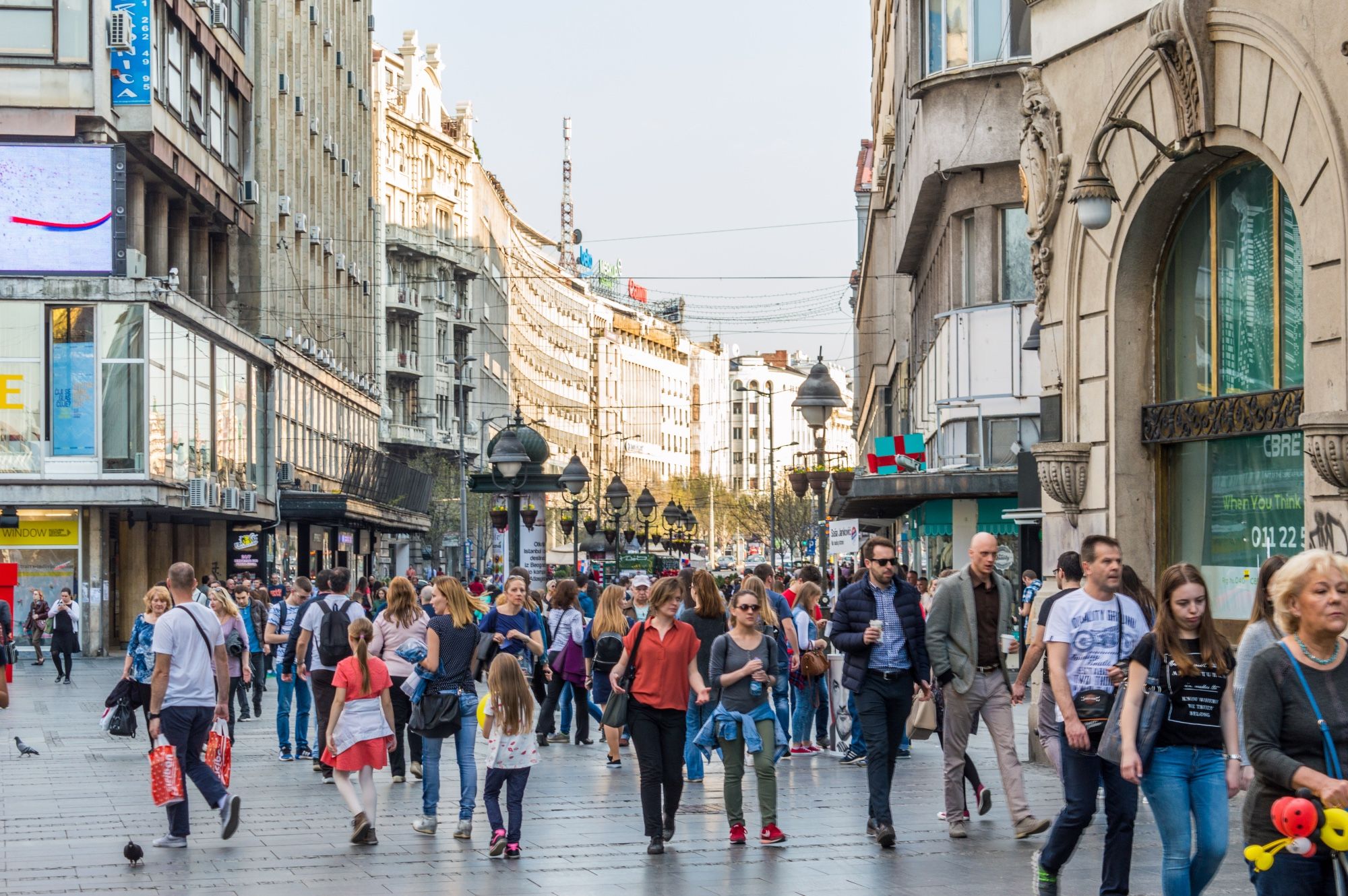 If you decide to get to know the centre of Belgrade better by walking, then Knez Mihailova Street and its surroundings are ideal for that. The street rests on the remains of the once mighty ancient Singidunum built by the Romans, and today connects Terazije Square with Belgrade Fortress and Kalemegdan Park.

When the wealthiest and most influential families erected houses on this street in the 1980s, it became the city's "housewife", the most vibrant shopping mall with elite Belgrade shops and the main promenade of Belgrade. Due to its great historical and cultural significance, the street is protected by the state. There are numerous historical buildings, monuments and cultural institutions including the Gallery of the Cultural Center of Belgrade, the imposing building of the Serbian Academy of Sciences and Arts with a gallery where concerts and exhibitions are held, Zepter Museum with works of local contemporary painting, Belgrade City Library with its basement premises Roman Hall with the remains of a gate and aqueduct from Roman times, cultural centres of France, Spain and Germany.

This street is never empty. Its centrepiece is full of Belgrade's favorite coffee houses. Walkers, fashionably dressed Belgrade women, street musicians and singers are part of her colourful everyday life. Republic Square, the main meeting place in Belgrade, is the starting point of the city tour. The square, as a cultural and social hub of Belgrade where the past meets the present, is the place where the youth gathers and where concerts and events are held. It is surrounded by historical buildings - National Theatre built emulating La Scala in Milan, Riunione Palace housing Boško Buha Theatre and the monumental edifice of the National Museum, the largest and oldest Serbian museum.

The monument to Prince Mihailo Obrenović, the work of the famous Venetian sculptor Enrico Pazzi, occupies the central area of the Square. It was set up in 1882, in memory of the Prince who improved the economic and cultural life in Serbia, and who was assassinated in 1868.