Now that the dust has settled on IAAF World Indoor Championships Birmingham 2018, data provided by IAAF partners has given us the opportunity to look in more detail at the standout performances. A wealth of extra timing and measurement data has been published, which will keep stats fanatics interested for weeks.

Seiko has provided transponder times at every 100 metres for every athlete in a distance race, except those who were disqualified. It’s the first time such depth of information has been made available at an IAAF World Indoor Championships.

There are also split times for every relay runner, in heats and final.

From Delta Tre are unofficial but fascinating measurements showing how far athletes took off before the board in horizontal jumps, and how far the hop, step and jump phases were in each valid triple jump.

We marvelled at the finishing speed of stars like Adam Kszczot, Genzebe Dibaba and Yomif Kejelcha. Now we know exactly how fast they were moving around the track at Arena Birmingham.

Poland provided the quickest closer in the men’s 1500m, where Marcin Lewandowski clocked 25.77 and 51.90 for his last 200m and 400m. These times were marginally faster than the 25.88 and 52.06 of the new champion Samuel Tefera, but Lewandowski was too far back to challenge for gold when the closing sprints began.

The drama of the men’s heptathlon finale is apparent from the timing data for the 1000m. Damian Warner needed to beat Kevin Mayer by three seconds to snatch the gold. For much of the race, the gap between the two was no more than 1.96, then Warner suddenly stretched it from 1.27 to 2.52 in the last 200m. Another 0.43 would have got gold for the Canadian.

The quickest single 100m sections in distance races were both by 800m runners in their first-round races: Mohamed Ahmed Hamada 12.18 and Raevyn Rogers 13.71.

The men’s 4x400m final was the greatest ever at the championships, with a then world record by Poland and a Commonwealth record by Trinidad and Tobago, which was insufficient for a medal.

Poland's Jakub Krzewina ran a 45.00 anchor to overhaul USA's Vernon Norwood (45.67), but Fred Kerley (44.85) and Kevin Borlée (44.86) were quicker. Kerley’s run was particularly impressive as it was on the first stage, from blocks, the quickest ever opening leg for a relay indoors. Trinidad’s Jereem Richards again showed his 400m potential with legs of 45.52 (heat) and 45.02 (final), each time coming through traffic.

The jumps analysis showed that the three principals in the men’s long were all accurate when it mattered. Juan Miguel Echevarría, Luvo Manyonga and Marquis Dendy were respectively only 2.7cm, 0.2cm and 1.2cm short of the board edge on their best jumps.

Just four centimetres covered those medallists, but in the triple jump the equivalent margin was one centimetre less. Of the top three in that event, only silver medallist Almir dos Santos “won” a phase with his 6.34m jump in round two. The longest hop was Zhu Yaming’s 6.45m, while the longest stepper was 41-year-old Fabrizio Donato with 5.60m.

Among the women jumpers, Quanesha Burks lost most on the runway. She had two long jumps with a gross distance farther than 6.90m, but was behind the board edge by at least 13.2cm on all her valid efforts. The woman one place ahead of her, Sosthene Moguenara Taroum, lost only 1.6cm on the leap which earned her the bronze. 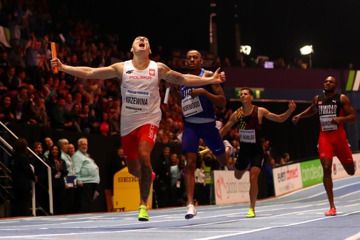 A look at the Polish men’s 4x400m relay squad that broke the world indoor record at the World Indoor Championships in March, a record that was ratified earlier this week.

Bronze in Birmingham just the beginning for Przybylko

When Mateusz Przybylko was 17, shortly after finishing 11th in the high jump final at the 2009 IAAF World Youth Championships, he made a promise to his coach. 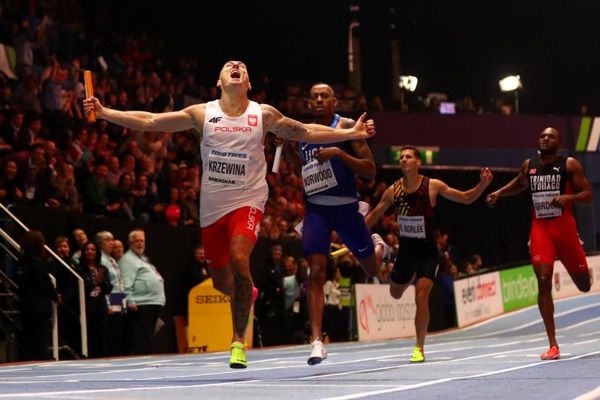 A surprise world indoor record* for Poland, a third world indoor title for Renaud Lavillenie and a hometown hero taking gold were among the final highlights of the IAAF World Indoor Championships Birmingham 2018.