Edoardo Scotti’s 45.21-second run in the 400m at the Wanda Diamond League meeting in Rome last year was more than just a PB.

For the 20-year-old sprinter, winning a race inside Rome’s iconic Olympic Stadium was the realisation of a lifelong goal. And for Italian fans of the sport, it offered a ray of hope during what had been an extremely challenging year for the country.

Putting his finishing kick to good use, Scotti came from behind to defeat Kuwait’s Yousef Karam and Poland’s Karol Zalewski.

“Before the race, my coach told me that I had to push all the way to the end,” said Scotti. “Despite a slower start than usual, I gave it my all coming off the last bend. At first I wasn’t sure if I had won, but when I saw my name on the display, I felt very emotional.”

Scotti’s winning time was a national U23 record and places him fourth on the Italian senior all-time list behind Davide Re (44.77), Matteo Galvan (45.12) and Andrea Barberi (45.19). Scotti is under no illusion that, in an ordinary year, most Diamond League races are won in a quicker time, but he was nevertheless delighted to produce a lifetime best in what was one of the biggest occasions of his career to date.

“It was my first time in a great race on such a big stage and I was happy with my winning time,” he says. “Unfortunately the 400m races in the Diamond League in 2020 weren’t of the same standard as they had been in the past, because there were no US sprinters. My only regret is that there were no fans in the Olympic Stadium.”

It was Scotti’s fourth 400m victory of the year, having also won at the World Athletics Continental Tour meeting in Bydgoszcz (45.48, a PB at the time) and at the Italian Championships (45.77), where he became the first male athlete born in the 2000s to win a senior national outdoor title. A few days after winning in Rome, he won the Italian U23 200m title in a PB of 20.95.

“My run in Bydgoszcz showed that it was possible to run fast even in a difficult season affected by the pandemic,” he says. “The final part of the season was very positive and I was a bit sad when it was over. I really wanted to continue competing but I also knew that I needed a rest before starting my preparation for the 2021 season.”

Italy’s 4x400m triumph provided one of the enduring images of the World U20 Championships Tampere 2018.

Although three of the four runners on Italy’s team had been part of the winning quartet at the European U20 Championships one year prior, in Tampere they were up against not just Europe but the rest of the world, including the mighty USA – winners of all but two of the men’s 4x400m titles from the previous 16 editions of the World U20 Championships.

Jamaica, one of the pre-competition favourites, were disqualified in the heats, while the USA botched their first exchange in the final, leaving them with ground to make up for the remainder of the race.

The well-drilled Italian team made no such mistakes, though. Alessandro Sibilio put Italy into the lead on the third leg and by the time he gave the baton to Scotti – who had finished fourth in the individual 400m after setting a national U20 record of 45.84 in the semifinal – they had an eight-metre lead.

Scotti maintained Italy’s position and crossed the line in a European U20 record of 3:04.05 to win by more than a second.

Not only did Italy win their first global 4x400m title at any level, they also became the first European team to win the men’s 4x400m at the World U20 Championships. Their last global medal in the men’s 4x400m came at the 1980 Olympic Games, but their time from that race – 3:04.54 – was slower than the U20 team’s time in Tampere.

“We had dreamed about the 4x400m medal for a long time,” says Scotti. “I ran in the best ever Italian team. I celebrated the win after the race, but it took months for our achievement to sink in.”

What made Scotti’s achievement all the more incredible is that he had started athletics just three years prior. While taking part in a school cross-country race in March 2015, Scotti was spotted by Lella Grenoville, the technical director of Fanfulla Lodigiana athletics club.

After training there for just a few months, Scotti finished second in the 300m at the Italian U16 Championships. He went on to represent Italy at the 2016 European Youth Olympic Festival, winning the medley relay, and in 2017 he set national U18 records indoors (47.77) and outdoors (46.87).

A foot injury prevented him from competing in the individual 400m at the 2017 European U20 Championships, but he managed to get the all-clear just in time for the 4x400m, which Italy won in 3:08.68.

“I had great teammates,” he recalls. “Nobody could beat us that day. It was my first international title and the best day of my life.”

He ran the opening leg for Italy at the 2018 European Championships in Berlin, placing sixth in 3:02.34. One year later, while still an U20, Scotti ran at the World Relays in Yokohama and then at the World Championships in Doha, clocking 3:01.60 in the heats and 3:02.78 in the final to place sixth, booking Italy’s spot at the Olympic Games. 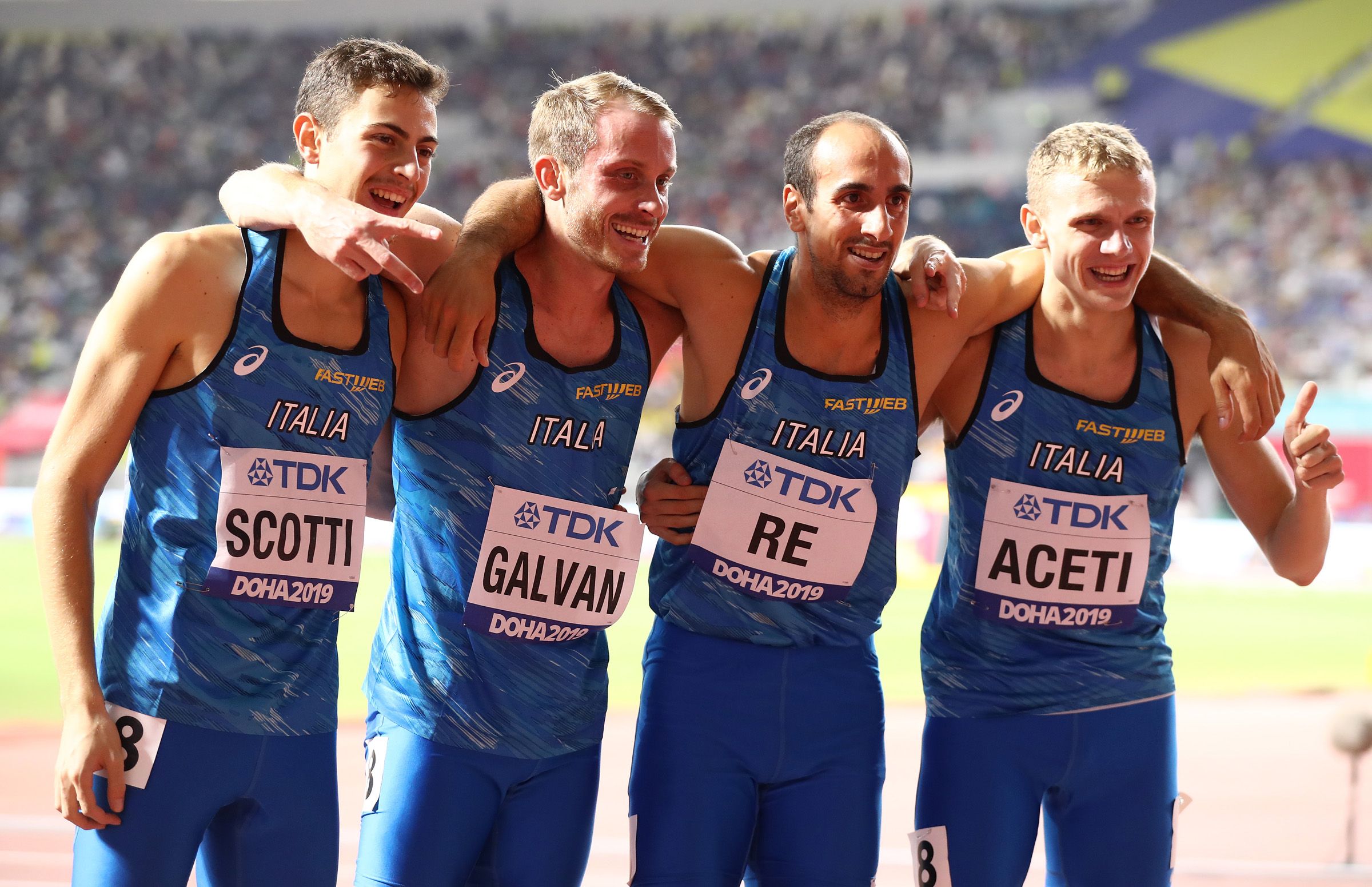 “Junior competitions are good opportunities to gain experience, but senior championships are totally different,” he says. “The atmosphere is more serious and there’s more pressure.”

“I really enjoyed the race in Doha. It was really special to be on the team with Davide Re (national record-holder). We were all a bit tired in the final, but I managed to overtake the French team on the anchor leg and we finished sixth.”

In among his senior relay appearances, Scotti rounded out his junior career with individual 400m victory at the European U20 Championships in Boras.

“It was a dream come true,” he says of his run in Boras. “The rest of my season wasn’t great, but I managed to put it all together in that race. I was also captain of the Italian team there and I was proud to be a role model for my teammates. I really wanted the individual gold medal and I dedicated it to my family and my coach, Giacomo Zilocchi.”

Scotti started working with Zilocchi in November 2018 when Scotti joined the Carabinieri Bologna military. “It’s the perfect atmosphere,” says Scotti. “Along with my physiotherapist Silvia Gandini, we have created a good team. And Giacomo and I are good friends outside athletics.” 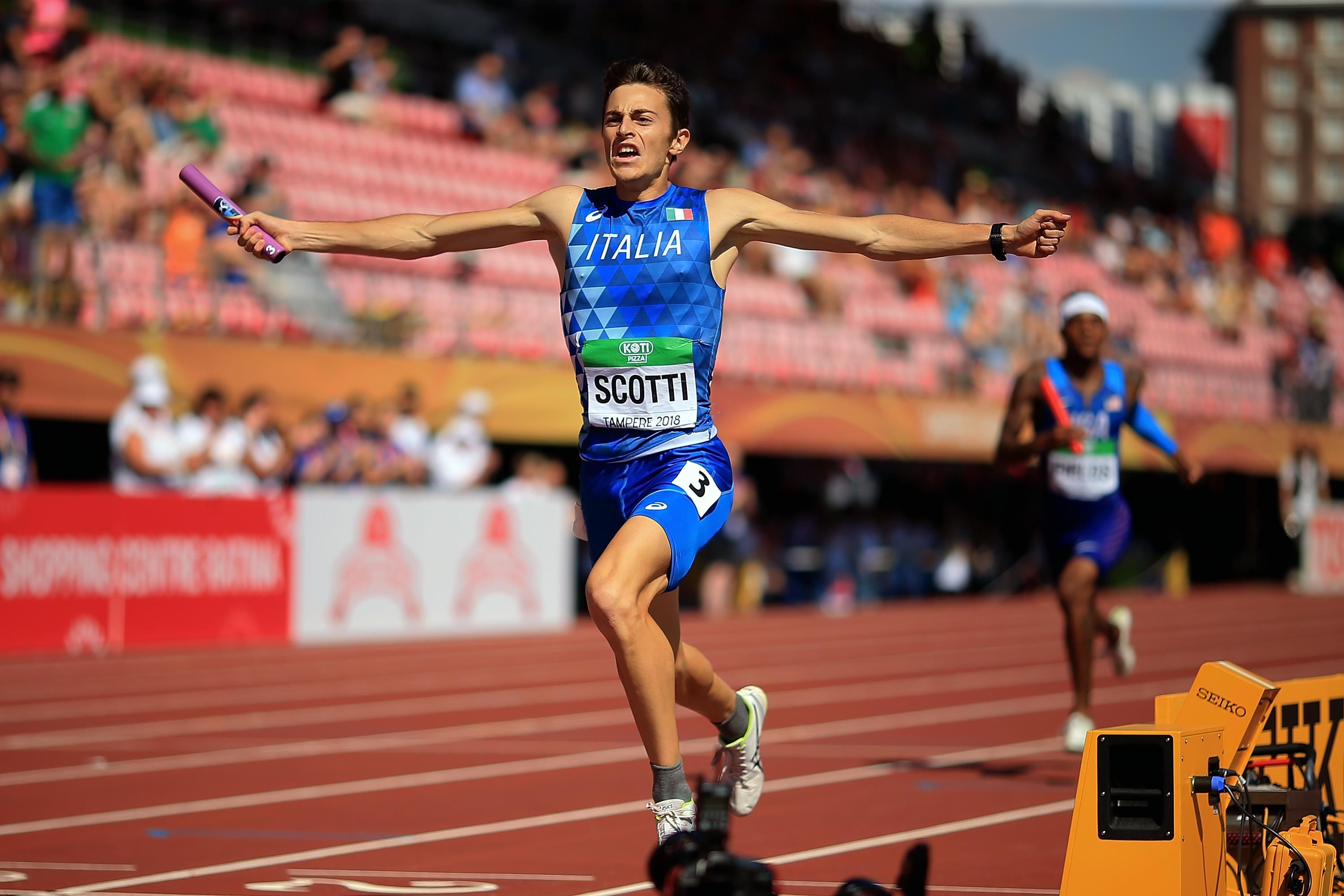 Following strong performances at recent major championships, the Italian 4x400m squad hopes to maintain their momentum in the coming years. Re, who smashed the Italian record with 44.77 in 2019, has inspired the new generation which includes Scotti as well as European U18 champion Lorenzo Benati.

Their immediate goal is to reach the final at the World Athletics Relays Silesia 2021 and, of course, at the Olympic Games in Tokyo. The long-standing national record of 3:01.37, set by Giovanni Bongiorni, Vito Petrella, Mauro Zuliani and Roberto Ribaud at the 1986 European Championships, is also a big target.

The recent news that Rome will host the 2024 European Championships has provided some additional motivation to all Italian athletes. Scotti, of course, already knows what it feels like to win in Rome’s Olympic Stadium. He hopes to do so again in little more than three years’ time.

“Hopefully 2024 will be my best year,” says Scotti, who will be 24 at the time of the event. “My goal is to reach the final of the individual event, but I’m also looking forward to the 4x400m because there’s always great support from the fans during relays.

“And this time I hope that we’ll be able to fill the Olympic Stadium with many fans.”

BACK
Pages related to this articleAthletes
Edoardo SCOTTI

World Athletics is looking for an Event Operations Coordinator to join its competition and events department.

Rohan Browning sped to a wind-assisted 9.96 clocking over 100m at the Illawarra Track Challenge in Wollongong on Saturday (16), making him the second-fastest Australian over the distance in any conditions.