Statisticians Mirko Jalava and A Lennart Julin look back at the best road running performances of the year.

Just like in 2013, the marathon world record was broken again in Berlin. The 30-year-old Dennis Kimetto, with a previous personal best 2:03:45 from a victorious run in the 2013 Chicago Marathon, chopped 26 seconds off his Kenyan compatriot Wilson Kipsang’s mark of 2:03:23 a year earlier.

This year was easily the best marathon year until now in terms of results.

In Berlin, Emmanuel Mutai, also from Kenya, clocked the second fastest non-aided result ever with 2:03:13 for the second place and ran a world record for 30km of 1:27:37 as an intermediate split.

The Chicago Marathon was the second fastest race of the year. The winner there, Eliud Kipchoge, was also the only athlete to win two major ‘big city’ races in 2014.

The fourth fastest time of the year was Sammy Kitwara’s 2:04:28 for the second place in Chicago while the previous world record-holder Wilson Kipsang completed a total dominance of the top five places in the 2014 world list for Kenya.

The 32-year-old won in London in April clocking 2:04:29. Just 18 years old at the time of the race, Ethiopia’s Tsegaye Mekonnen won the Dubai Marathon in January in a world junior best of 2:04:32.

Men’s half marathon and 10km

The fastest half marathon of the season came from, perhaps, a slightly surprising source.

Kenya’s 22-year-old Abraham Cheroben reached his peak in October in Valencia. The Kenyan had already smashed his personal best with 59:14 when finishing second in Berlin in March (previous best of 1:00:38 in 2013), but a 58:48 winning mark and course record in the Spanish city was the fastest time of the year.

It was also the only sub-59-minute half marathon in 2014. The second placed runner in Valencia, Cheroben’s compatriot Kenneth Kipkemoi, ran 59:01 for the second fastest time of 2014.

The third fastest athlete this season was another surprise name, 24-year-old Guye Adola.

The Ethiopian came from nowhere to finish third in Copenhagen at the IAAF World Half Marathon Championships in a 59:21 personal best and later improved that when he won in New Delhi in November in 59:06.

Just one second behind in New Delhi was Kenya’s Geoffrey Kamworor in 59:07, a second slower than his winning time in Copenhagen when he took the world title. Samuel Tsegay of Eritrea was second in the World Half Marathon Championships race in 59:21.

For some years there has been an evenly matched fight for event supremacy in this event between Kenya and Ethiopia and 2014 also fitted that description.

The Marathon Majors series provides one illustration: in those six races Kenya had 4-2 in wins, Ethioipa 4-2 in second places and they ended up 2-2 in third places (USA and Portugal had one third place each).

This year was a rather quiet championship year, nothing on the global level and the African Championships didn’t include the marathon so Kenya and Ethiopia never faced off as national teams.

Kenya did, however, take the first two places through Flomena Cheyech and Caroline Kilel at the Commonwealth Games and the Kenyan-born Bahraini runner Eunice Kirwa won the Asian Games title.

The quickest 2014 times came on the classical – but slightly downhill and therefore not eligible for record purposes – Boston Marathon course where the first four surpassed the existing course record of 2:20:43 and the top-two, Rita Jeptoo and Buzunesh Deba, even dipped under the exclusive 2:20-barrier.

The fastest record-legal times came in London in the spring and in Berlin in the autumn.

In London, Kenya’s double world champion Edna Kiplagat ran 2:20:21 to take a narrow win over her compatriot Florence Kiplagat and Ethiopia’s Tirunesh Dibaba, the multiple gold medallist on the track now making a promising debut as a marathon runner.

The Berlin Marathon was dominated by Ethiopian runners with four of the top five places, with Tirfe Tsegaye crossing the line first in a world-leading time of 2:20:18.

The final Major of the year in New York saw Mary Keitany make a successful return to the marathon after a maternity break. In the chilly and windy conditions, a 2:25:07 time was sufficient to triumph.

Note: it is now confirmed that Boston winner Rita Jeptoo failed a doping test conducted several weeks before her Chicago Marathon win in mid-October. An announcement about what sanction will be imposed upon her, and the subsequent revision of the results of the races she ran in, is pending.

Women’s half marathon and 10km

This year was a major year for this distance with both an IAAF World Half Marathon Championships taking place and a world record being set.

The championships were staged in an innovative way in the Danish capital Copenhagen. By integrating the championship race with a mass event, they managed to create an entertaining and imaginative festival atmosphere all along the course.

The Kenyan runners certainly must have enjoyed it as they managed a historic sweep with their five runners claiming the first five places.

Strongest in the last few kilometres was Gladys Cherono who won in 1:07:29, 15 seconds in front of Mary Wacera and 23 seconds ahead of Selly Chepyego.

The fact that the half marathon is an event ruled by Kenya is underlined by the fact that their World Half Marathon Championships team did not include the four fastest runners in the world in 2014: Florence Kiplagat, Mary Keitany, Joyce Chepkirui and Priscah Jeptoo.

Kiplagat trimmed 38 seconds off the world record with her 1:05:12 run in Barcelona a month earlier, former record-holder Keitany in September won the Great North Run in 1:05:39 (slightly downhill, but she notably did shave one second off Paula Radcliffe’s 11-year-old course record), Chepkirui triumphed in the Prague race in April in 1:06:18 and Jeptoo in February won the prestigious RAK race in 1:07:02.

The fastest 10km on the roads this year was also run by another Kenyan, Betsy Saina, who clocked a sparkling 30:46 on the fast Tilburg course in September.

Saina was the only runner under 31 minutes this year with the next best being training partners and friends Chepkirui and Cherono, who had a thrilling race in Berlin with both women being given the time of 31:02 but the verdict going to Chepkirui. 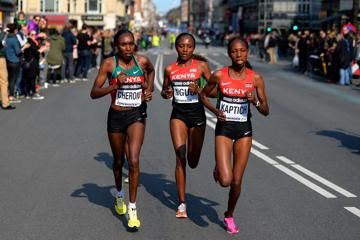 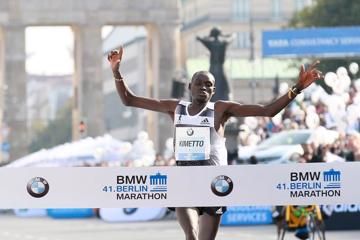