World half marathon champion Kamworor the favourite in Ceske Budejovice

Kamworor won the world half marathon title earlier this year with a world-leading 59:08, just 15 seconds shy of the personal best he set when winning the Ras Al Khaimah Half Marathon last year.

The 21-year-old has stated that, weather permitting, his goal will be to break the course record. He and his fellow Kenyans travelled to the Czech city straight from Nairobi and he felt that the predicted warm conditions would not be a problem.

Kamworor, who set a PB of 27:44 over 10km in his last race, will be challenged by several strong athletes including Chebii, who set the course record of 59:49 in 2012, and Daniel Wanjiru, another Kenyan, who ran a PB of 59:59 when finishing third at this year’s Sportisimo Prague Half Marathon.

Another recent entry and a familiar face in Czech events is Henry Kiplagat, who will be anxious to improve on his personal best of 1:00:01 set two years ago in Prague.

The 23-year-old Ethiopian has set PBs in both the half marathon (1:10:37) and marathon (2:26:42) this year, and will be going for a trifecta of RunCzech Running League events.

But she will face strong competition from, among others, a late entry, Victory Chepkemoi, a fellow Kenyan who at 27 is a relative newcomer to running. 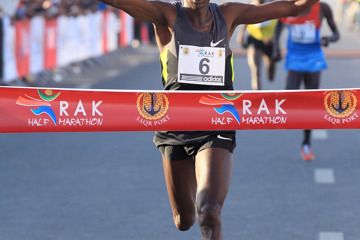