“I was hoping to run 2:06, but the last half of the race was quite difficult with wind,” said Chebii, who clocked 2:09:06, beating Kipruto by six seconds.

The three pace setters were asked to take the race out in a three-minute-per-kilometre clip, and they did. Kicking off with a 14:57 opening five kilometres, they forged on with splits of 14:53, 14:59, 15:11, 14:53 and 14:59 before the first pace maker dropped out at 30 kilometres. At that point, the two remaining pace makers looked the best among the leaders.

Just before 30 kilometres, Chebii fell behind Kipruto and the pace makers, but then worked his way back to join them at the front a kilometre later. The duel between the two Kenyans continued for more than 10 kilometres, and they entered the Ojiyama stadium together. Chebii finally made his move with less than a lap of the track remaining.

“I knew Kipruto had a faster time than me, but just as we entered the stadium together he seemed to have a problem,” Chebii said. “So although I was tired, I made my move and he could not respond, so I went for the win.”

The race for the first Japanese was fierce. Marathon debutant Akinobu Murasawa ran aggressively in the first half, reaching midway in 1:03:20 just behind Chebii and Kipruto. He was still running well at 25km, but then began to slow.

Just after 35 kilometres, Murasawa was caught from behind by Satoru Sasaki and began to drift out of contention, eventually finishing 28th.

Sasaki, who struggled with side stitches from kilometres 17 to 25, fought his way back towards the leaders to finish fourth overall in 2:10:10.

Tadashi Isshiki, who was the focus of much pre-race attention, lost contact with the leaders at about the 17th kilometre and eventually dropped out after 30.

With the qualifying races for Japan’s World Championships marathon squad now concluded, it appears that the team will likely include Hiroto Inoue and Yuki Kawauchi, the first Japanese finishers in the Tokyo and Fukuoka Marathons, respectively. The third position will be between Hiroyuki Yamamoto, the second Japanese in Tokyo, and Kentaro Nakamoto, the winner of the Beppu-Oita Marathon.

Conditions were generally favourable, with temperatures about 11C with 50% humidity and mostly cloudy skies. 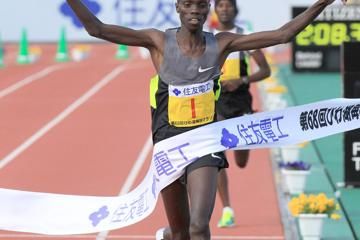 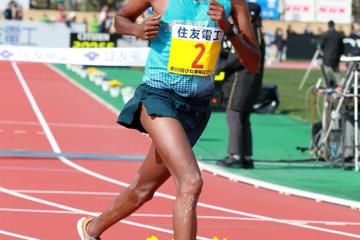 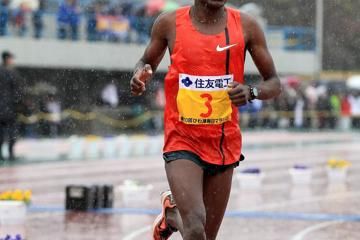 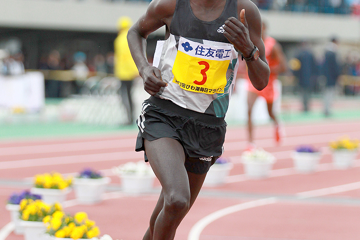