Ethiopian Abdulahl Dawud and defending champion Priscah Jepleting Cherono are the favourites at the 32nd edition of the Huawei Venice Marathon, an IAAF Bronze Label Road Race, which starts from Villa Pisani in Stra and ends at the Riva dei Sette Martiri in Venice, on Sunday (22).

Jepleting will be looking to score a second consecutive win in Venice after improving her personal best to 2:27:41. The experienced Kenyan athlete started her career as a cross country runner and won five world team cross country medals from 1997 to 2011 and the individual world silver medal in the short course race in 2006. She clocked 1:08:36 in her first half marathon in Lille in 2012 and ran 2:29:35 in Enschede before her debut in Venice last year. Her credentials also include a fine 14:35.30 in the 5000m from 2006 and a fourth place finish at 10,000m at the 2011 World Championships in Daegu in her career best of 30:56.43.

The Kenyan top runner will face Ethiopia’s Kumsa Chaltu Kindesa, who clocked her lifetime best of 2:30:28 in Seoul in 2015.

Italian hopes are carried by 25-year-old Eyob Faniel, a runner of Eritrean origin, who made his marathon debut in Florence last year with a third place finish. Faniel, who runs for the local Venice Marathon Club, was expected to run his first marathon in the lagoon city in 2015 and 2016 but was sidelined by injury problems. The young father of a one-year-old daughter Wintama is trained by Italian top runner Ruggero Pertile, who has recently started his coaching career as the new Technical Director of his club Assindustria Sport Padua.

More than 7700 runners from 77 countries are expected to take part in the popular event. The race will start from Stra, a small town located 25 km away from Venice on the Riviera del Brenta, a riverside area marked by several 18th century mansions next to the course and will finish in the historic centre of Venice on the embankment named Riva dei Sette Martiri in a scenic positition facing the lagoon. 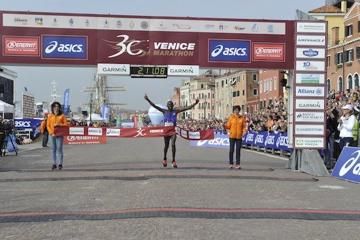 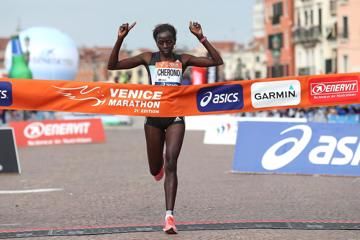 Jepleting and Chepkwony dominate in Venice...