All eyes on Chelimo at Marseille Cassis 20km

Edith Chelimo, the seventh-fastest woman in history for the half marathon, will be the favourite at the 39th edition of the Marseille-Cassis 20km, an IAAF Silver Label road race which will take place on Sunday (29).

Following a 1:10:59 third-place finish in Paris and a 1:08:57 runner-up spot in Paris earlier this year, the 31-year-old Kenyan won the recent Cardiff Half Marathon in 1:05:52. It took more than three minutes off her PB and moved her to seventh on the world all-time list for performances set on record-eligible courses.

Based on her strong result in Cardiff, Chelimo appears to be the clear favourite for Sunday’s race. The Marseille-Cassis course record of 1:07:02, set last year by Kenya’s Joyciline Jepkosgei, could even be in jeopardy.

With a best of 1:08:06 set when finishing second in Houston in January, Ethiopia’s Dera Dida has the second-fastest time of the field. Since then, the 21-year-old won the Ethiopian 10,000m title on her debut at the distance and went on to reduce her PB to 30:56.48 before finishing 14th at the IAAF World Championships in London.

Kenya’s Stacy Ndiwa and Ethiopia’s Muliye Dekebo should also be in the running for podium places. Ndiwa, who finished fifth at the 2015 World Cross Country Championships, last month set PBs of 31:37 for 10km and 1:09:09 for the half marathon. Dekebo, meanwhile, set a PB of 1:09:10 earlier this year at the Rome-Ostia Half Marathon.

While there’s a clear favourite in the women’s race, the men’s contest appears to be wide open.

The no.1 bib given to Wilfried Kimeli Kimitei implies the Kenyan is the favourite. The 32-year-old improved his half marathon PB six weeks ago, finishing fourth in Usti nad Labem in 1:00:12. The African 10,000m silver medallist won the 2016 Nairobi Half Marathon, held at high altitude, in 1:00:38.

Although Sunday’s race will be the longest distance he has ever contested, Jemal Yimer will start as one of the favourites. The 21-year-old Ethiopian has enjoyed a breakthrough season in 2017, finishing fourth at the World Cross Country Championships in Kampala and fifth over 10,000m at the World Championships in London. His most recent performance was a 27:54 10km PB in Prague last month.

Ethiopia’s Terefa Deleba and Kenya’s Edwin Kimutai will also have a role to play, after improving their respective half marathon personal bests in 2017. The former set a time of 1:00:22 in Istanbul back in April while the latter finished runner-up in 1:00:57 in Karlovy Vary in May, just three seconds behind Kimitei.

Kenya’s Evans Cheruiyot, not to be confused with the 2008 Chicago Marathon champion and 2007 world half marathon bronze medallist of the same name, placed a close fourth behind Kimitei and Kimutai in Karlovy Vary in a PB of 1:00:59 and should also be in contention here.

Following his 10km PB of 28:44 in Langueux in July where he was runner-up, Ethiopia’s Tesfaye Ambesa will be another man to watch.

Felicien Muhitira also cannot be discounted. The Rwandan placed fourth at the Paris 20km earlier this month in 58:43 and prevailed at the Marvejols-Mende, the classic French race which is similarly challenging to this weekend's race.

The Marseille-Cassis route requires the 15,000 runners to climb the demanding 327-metre Col de la Gineste halfway through the race before the descent towards Cassis. Ethiopia’s Atsedu Tsegay holds the course record at 58:11.

BACK
Pages related to this articleAthletes
Edith CHELIMO 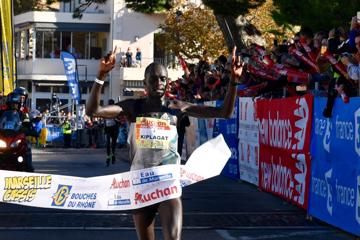 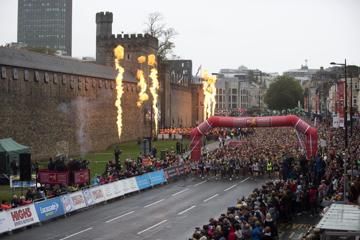