Canada’s capital plays host to another spectacular weekend of racing as the Ottawa 10k and Scotiabank Ottawa Marathon take place on Saturday (23) and Sunday (24) respectively.

This year the Ottawa 10k became an IAAF Gold Label Road Race – the only 10km road race in the country to be so honoured – and will also serve as the Canadian 10km Championships.

A year ago Kenya’s Mary Keitany returned to competition here after maternity leave and set a course record of 31:21. The course is flat and fast, traversing the beautiful Rideau Canal, and a handful of athletes have set their sights on Keitany’s standard.

The Kenyan was also the 2012 African 5000m and 10,000m champion and in January she made her marathon debut, finishing second at the Dubai Marathon with a stunning time of 2:20:03. Confident and eager to run in Canada for the first tim,e she has declared her intent to beat the record.

First place is worth USD $8000 with a bonus for a course record and Ottawa offers a gender bonus of USD $2000 US as well.

The elite women will be given 3:25 head start and the first runner to cross the finish line, male or female, collects this bonus. Keitany accomplished the feat a year ago.

Foremost among Cherono’s rivals are fellow Kenyans Lineth Chepkurui, who has a 30:45 personal best, and the 21-year-old Peris Chepchirchir who has run 31:34 for the 10km distance and has strung together some impressive races on the road and cross country over the past 12 months.

Leading Canadians enticed by the promise of a national title include Canadian marathon record-holder Lanni Marchant, with a best of 2:28:00, and Natasha Wodak who set a Canadian 10,000m record of 31:41.59 across the border at the Payton Jordan Invitational last month.

Marchant also ran a personal best of 31:46.94 in the same race, indicating her winter training camps in Kenya and Flagstaff, Arizona, have paid dividends.

Aside from the national title at stake, both Canadians are capable of getting on to the podium and earning additional cash.

The men’s course record, set by Ethiopia’s Deriba Merga at 27:24 in 2009, seems a bit out of reach for this field but the race will surely be highly competitive.

David Kogei, last year’s runner-up to Wilson Kiprop, will face fellow Kenyan Amos Mitei, who ran a 27:42 personal best achieved in the thin air of Nairobi a year ago.

A short hill, midway through the race, has been eliminated and so the organisers have high hopes that Yemane Tsegay’s 2014 course record of 2:06:54 – which is also the Canadian all-comers’ record – can be broached.

Leading the charge is Tsegay’s former training partner Girmay Birhanu, although Ottawa will mark his fourth marathon in seven months.

Like Tsegay a year ago, Birhanu won the Daegu Marathon in April before coming to Ottawa and defying conventional logic. Sporting a personal best of 2:05:49 from the 2014 Dubai Marathon, he represents a real threat to the record.

Dadi Yami will provide ample competition having run 2:05:41 at the 2012 Dubai Marathon and more recently finishing fourth at the 2015 Seoul Marathon in 2:08:05.

Much will depend too on how well the Ethiopians adjust to the seven-hour time zone difference as well as a late arrival in Ottawa. They received their visas only this week so they were due to arrive on Friday after travelling from Addis Ababa.

A year ago Tigist Tufa set a women’s course record of 2:24:31 and then, of course, went on to win the London Marathon last month.

Competing for the top women’s honours in Ottawa this year will be Ethiopia’s Meselech Melkamu.

In April she won the Daegu Marathon. With a personal best of 2:21:01 from the 2012 Frankfurt Marathon, as well as a collection of World Championships medals on the track and in cross country, she is the class of the field.

Last year Kiprop finished a disappointed third in Ottawa, complaining of running two marathons too close together. If she has learned from her mistake, there is every possibility she could challenge her own personal best of 2:23:54 and return to the podium.

The races will be live streamed on www.runottawa.ca 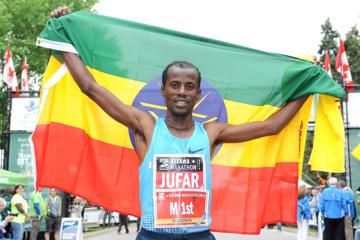 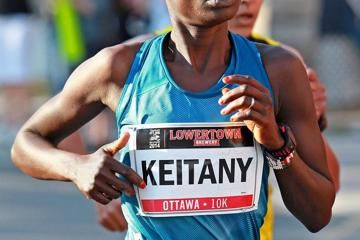 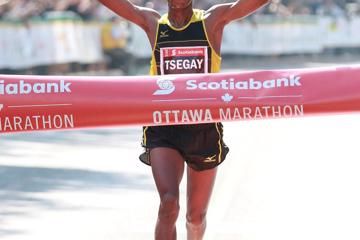 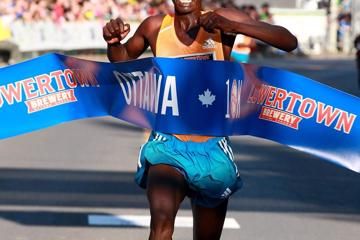