As befits a nation’s capital, Ottawa proudly hosts a world-class Marathon, which has achieved the IAAF Silver Label Road Race status the past five years. What is unique in this Canadian city is that, on the same weekend, it also runs an IAAF Silver Label 10km race.

No other city in the world can make that claim.

The 2013 edition of the Tamarack Ottawa Race Weekend is set for May 25-26 with the 10km on Saturday and the Marathon on Sunday. Because of the unique two-day format, many of the elite marathon runners join VIPs at the finish line of the 10km to cheer on their countrymen and partake in the festive atmosphere.

“I don't have a personal performance highlight,” says elite athlete coordinator Manny Rodrigues of past races in Ottawa. “But I guess if you want to single out one, then Deriba Merga's 10km does stand out because it finally broke John Halvorsen's course record after 21 years.”

Halvorsen, who represented Norway at the 1988 and 1992 Olympics, assumed the role of president and race director of the Tamarack Ottawa Race Weekend earlier this year.

Merga came to Ottawa in 2009 having won the Boston Marathon a month earlier. The Ethiopian was looking for a World 10km record and the accompanying $100,000 bonus. But after nudging the appointed pacemaker to go faster at the 3km mark, he set off alone. Facing a head wind in the latter stages of the race, he had to be content with a course record of 27:24. At the time, that was the seventh-fastest performance ever recorded.

Merga is far from being the only Boston winner to compete in Ottawa. Kenya’s Geoffrey Mutai returns to the Ottawa 10km after easily winning here last year in 27:47. Mutai has won three of the World Marathon Majors: the 2011 Boston Marathon, 2012 New York Marathon and the 2012 Berlin Marathon.

“The course in Ottawa is not bad,” said Mutai. “But for a 10km race it’s very important that weather conditions are good. I will need an athlete who can run a stable speed as pacemaker. I prefer a pacemaker from my own training group who knows me and I know him.”

To that end, his training partner, Charles Kimeli, will accompany him to Ottawa in search of a fast time.

A year ago, Kenya’s Laban Moiben – winner of the Mumbai and Los Angeles marathons – set an Ottawa Marathon course record of 2:09:12. Although that time pales in comparison to those recorded on some of the pancake-flat courses, Moiben knows that Ottawa is about racing ‘mano a mano’ and not necessarily racing against the clock.

The incredible list of Ottawa alumni also includes Wesley Korir of Kenya, who finished second in the 2011 10km race and went on to win back to-back Los Angeles Marathons and more recently, the 2012 Boston Marathon. Ethiopia's Lelisa Desisa is another fine example. He won the 2013 Dubai Marathon in 2:04:45 and then won the Boston Marathon this past April. Three years ago he won the Ottawa 10km in 28:09.

Meanwhile, high calibre female runners are also attracted to Ottawa’s great crowds and fast 10km and Marathon courses. The women's Marathon course record belongs to Morocco’s Asmae Leghzaoui, who stunned everyone with her 2:27:41 in 2009. But the most famous Ottawa 10km alumnus must be Kenya's Catherine Ndereba, the former Marathon world record-holder, who also won two World titles and two Olympic medals. She won the 2007 Ottawa 10km in 33:01.

Dire Tune of Ethiopia, the 2008 Boston Marathon winner, has featured prominently at the Tamarack Ottawa Race Weekend in the past, winning the 2010 and 2011 Ottawa 10km races. But it is another Kenyan, Grace Momanyi, who holds the 10km course record of 31:24, which she set in 2005.

In addition to attracting some of the world’s top runners, Ottawa has always provided a great opportunity for Canadian athletes to tackle world-class competition on home soil without suffering the jet lag normally associated with travel. Having more than 100,000 spectators along the route always helps too.

Eric Gillis, a two-time Canadian Olympian, had planned to run the Ottawa Marathon this year but pulled out in mid-May due to injury. Canadian Krista Duchene will use the 10km to prepare for the World Championships Marathon in Moscow later this summer. Others, such as Canadian 10,000m record-holder Simon Bairu, have also raced here. Bairu won the 2007 Ottawa 10km.

With some of this year’s hottest runners set to compete in Ottawa’s two IAAF Silver Label events, Ottawa spectators and running enthusiasts are in for another weekend of record-setting finishes at the 2013 Tamarack Ottawa Race Weekend.

BACK
Pages related to this articleAthletes
Dire Tune 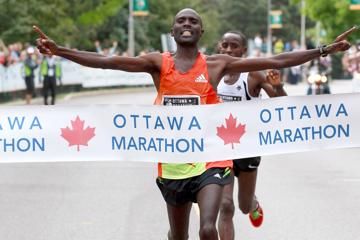 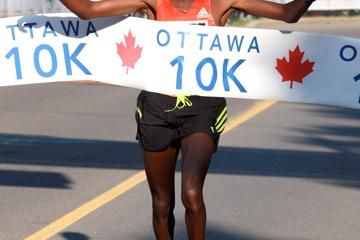