Tola and Jepkirui the favourites for Paris Marathon

Ethiopia’s Tadesse Tola and Kenya’s Eunice Jepkirui will be the fastest ever marathoners to line up in the French capital when they take part in the 37th edition of the Schneider Electric Marathon de Paris, an IAAF Gold Label Road Race, on Sunday (7).

Tola, with a 2:04:49 personal best, is back in Paris three years after winning the event and will be the man to beat, while Jepkirui (2:21:41) will be the big favourite in the women’s race.

Twenty-five-year-old Tola moved to 15th on the world all-time list when finishing third in Dubai this year. He also has the advantage of knowing the course, as he won in Paris in 2010 with 2:06:41 in what was then the second Marathon of his career. On that occasion he chose to stay in the pack before surging away with 5km to go, winning with a storming finish.

The women’s race also appears to be a Kenya versus Ethiopia match. Eunice Jepkirui will count on her teammate Agnes Kirpop, second in Paris two years ago, to help her in trying to break the 2:20 barrier.

The pack will line up at 8:30am on Champs-Elysées before going down towards La Concorde. The runners will continue their journey towards the East side of Paris through Rue de Rivoli, Rue du Faubourg Saint-Antoine and Avenue Daumesnil. They will perform a U-turn on the Bois de Vincennes joining the Seine after having passed the Place de la Bastille.

The course will echo the River’s design, passing the Eiffel Tower. The main difficulty will occur while cruising through the Bois de Boulogne as the marathoners will approach the finish line located on Avenue Foch, besides the Arc de Triomphe.

According the forecast, the weather will be cool (5°C) and sunny over the French Capital, conditions which seem favourable for breaking the Paris Marathon records, both set last year by Kenyan Stanley Biwott (2:05:10) and Ethiopian Tirfi Beyene (2:21:37).

A record has already been set before the beginning of the race as 50,000 registered applications have been attributed to the participants of the 42.195km race. 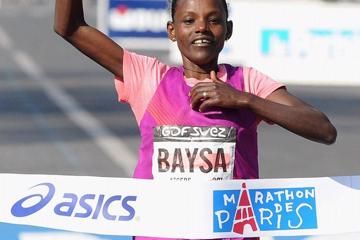