Mosop the star attraction for the Yellow River Estuary Marathon

The organizers of 2016 Yellow River Estuary International Marathon, an IAAF Silver Label Road Race, have assembled deep elite fields for the ninth edition of the race and Kenya’s Moses Mosop will be heading the men’s race entries on Sunday (8).

After being launched in 2008 in China’s Dongying, a port city in Shandong Province, the marathon was usually staged in May and the local temperature could be up to around 30 degrees Celsius, which normally made it difficult for the participants to record fast times.

As a result, the men’s course record remains a relatively modest 2:11:44, set by Kenya’s Isaac Macharia in 2010, but the 30-year-old Mosop is perhaps the biggest hope in recent years to improve on the long-standing record in Dongying.

Starting his marathon career in 2011, Mosop is the owner of the fastest marathon debut in history with his 2:03:06 clocking on Boston’s point-to-point course. His personal best on a record-eligible course is 2:05:03, when he finished third in the 2012 Rotterdam Marathon.

He has also registered the fastest marathon time that ever recorded on Chinese soil, winning at the 2015 Xiamen International Marathon with a course record of 2:06:19 while breaking the all-comers’ record of 2:06:32 set by the late Samuel Wanjiru when winning the 2008 Olympic title in Beijing.

The weather should not be that challenging for Mosop in his pursuit of a course record as the weather forecast for Sunday predicts a cloudy day with the temperature ranging from 14 -18 degrees Celsius while the elite runners are in action.

However, Mosop is not the only top runner in Dongying.

Kenya’s Mathew Kisorio, 26, has a best of 2:06:33 from when he finished second at the Valencia Marathon last November. He is also a very fast half marathoner with a best of 58:46, which makes him the fourth fastest man ever over that distance.

The 31-year-old Teimet has registered victories in Gongju, Seoul and Shanghai, with his best of 2:06:49 set when winning the 2010 Seoul Marathon. However, his best performance in 2015 was only 2:14:02 when he finished sixth at the Shanghai Marathon.

A total of eleven runners in the women’s field have a personal bests faster than the 2:30:09 course record set by Ethiopia’s Mestawet Tufa in 2014.

Georgina Rono, of Kenya, who will turn 36 in two weeks, is the fastest woman on paper with a best of 2:21:39 from when she finished as the runner-up at the 2012 edition of Frankfurt Marathon.

However, last year the former winner of Hannover and Eindhoven Marathons failed to dip under the 2:30:00-barrier as she only clocked 2:32:06 on two occasions, including finishing third at the Lanzhou Marathon in June.

The 33-year-old finished third in Seoul last month with an impressive 2:24:59, only 56 seconds shy of her PB set when winning at the Daegu Marathon in 2013.

Like Rono, Barsosio also possess varied experience running in China including winning at the Guangzhou Marathon in 2014 and finishing third in Chongqing last year.

Ethiopia’s Fantu Eticha Jimma, 28, has also been enjoying a solid start this season, finishing third in Xiamen in 2:26:53 after she clocked a personal best of 2:26:14 in Dubai last year.

Local runner He Yinli is another candidate for the podium in Dongying.

The 27-year-old Chinese athlete has a best of 2:27:35 when finished second in Chongqing last year.

BACK
Pages related to this articleAthletes
Moses Cheruiyot Mosop 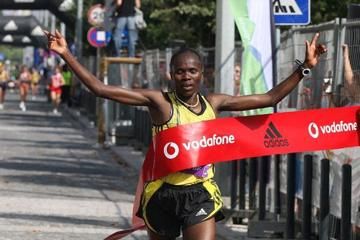