The Gran Premio Cantones de La Coruña will boast its usual star-studded line-up on Saturday (28) to confirm that the World Athletics Race Walking Tour Gold event, held on a one-kilometre circuit, is one of the key 20km competitions of the season.

Local aces Álvaro Martín and Diego García, the European gold and silver medallists respectively, are among the favourites in the men’s race. Martin won in La Coruña back in 2017 while García is the defending champion.

The duo has shown fine form in recent months. García, who was sixth at the Olympics last year, finished second over 10km in Madrid two weeks ago in 38:42. Martín, who was fourth at the Tokyo Games, was a convincing winner at the Iberoamerican Games in La Nucia last weekend, clocking 39:24.20 for 10,000m on the track.

Linke is one of the most consistent 20km specialists, having placed in the top five at the past four global championships, topped by his fourth-place finish in Doha in 2019. The 33-year-old, whose PB of 1:18:42 was set in La Coruña three years ago, was ninth in Madrid over 10km earlier this month and will be eager to bounce back on Saturday over his preferred distance.

Zhang placed fourth in Madrid while Wang, whose Chinese record of 1:16:54 places him third on the world all-time list, was 14th in the Spanish capital. Wilkinson, meanwhile, underwent knee surgery in late February and will be competing for the first time this season.

The Ecuadorian duo of Brian Pintado and David Hurtado should also be in the hunt for a top place. Pintado won in Rio Maior but failed to finish in Madrid. Hurtado, the 2018 world U20 silver medallist, was disqualified in Madrid but this weekend will return to the scene of his 1:20:37 PB.

Watch out too for Brazil's Caio Bonfirm, as the in-form Brazilian set a season's best of 1:18:54 last month in Podebrady and made the podium in Madrid.

Four of the top seven finishers from last year’s Olympics will clash in the women’s race. World silver medallist Qieyang Shenjie, the winner here in 2018, will start as the favourite. The 31-year-old Chinese race walker will be chasing her third win of the year, following commanding victories in Dudince over 35km (2:43:06) and in Madrid over 10km (43:07). The 2012 Olympic champion boasts the fourth-fastest ever time with her 1:24:45 clocking set last year in Huangshan.

Colombia’s Olympic silver medallist Sandra Arenas, who finished ahead of Qieyang at the Tokyo Games last year, is the defending champion in La Coruna and will be looking to bounce back after a 1:34:27 performance in Melbourne two weeks ago.

Australia’s Jemima Montag, the convincing winner of that race in Melbourne, will be competing outside of Australia for the first time this season. The 24-year-old, who was sixth at last year’s Olympics, remains unbeaten this year in six outings topped by a 20km lifetime best of 1:27:27 in Adelaide and a world-leading 42:39.2 over 10,000m in Canberra in January.

Local star María Pérez should also play a key role on Saturday. The 26-year-old European champion, who missed an Olympic medal by eight seconds, has shown strong form this year with a national 5000m record of 20:28.17. She will be joined by her in-form compatriot Laura García-Caro, the newly-minted Iberoamerican 10,000m champion (43:33.72). The Spaniard beat Peru's Kimberly García (43:41:50) on that occasion, gaining revenge from the Peruvian who had defeated her in Madrid over 10km. García will line up in La Coruna too.

The course records belong to the Chinese pair of Wang Zhen, who clocked 1:18:00 in 2015, and Liu Hong with her stunning performance of 1:24:38, a mark that stood as a world record for six years.

Weather forecasters are predicting a sunny day with a light breeze and temperatures in the 22-24C range at race time.

BACK
Pages related to this articleAthletes
Shijie QIEYANG 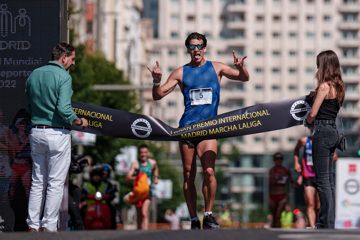 Karlstrom and Qieyang shine in Madrid...