Here’s the thing about Olympic year, something Akani Simbine knows will always be true.

“Everybody comes out fast,” he says. “Everybody runs fast, and we always talk about how everybody is just on form. Everyone is ready.”

The outdoor season may only be in its drive phase, but early evidence suggests that whoever is crowned men’s 100m champion in Tokyo on 1 August will need to ascend to a level he has never reached.

Thirteen different men have broken 10 seconds for 100m over the past seven weeks, and Simbine is one of them, running 9.99 into a stiff headwind (-3.0m/s) at altitude in Pretoria in late March before clocking a wind-aided 9.82 (+2.8m/s) at the South African Championships in April.

The race to the top of the world over 100m is as open as it’s ever been, and Simbine knows the fun is only just beginning. The 27-year-old South African has come oh-so-close to global 100m medals before, finishing fifth at the 2016 Olympics and 2017 World Championships and fourth at the 2019 World Championships – 0.03, 0.06 and 0.03 away from the medals.

The margins are fine, the competition cutthroat, but what does Simbine feel it will take to get on the podium in Tokyo?

“People are going to have to run their PBs, that’s for sure,” he says. “I’ll just speak for myself and say I’ll be ready, I’ll be at my best and making sure I run the best I can when it counts.” 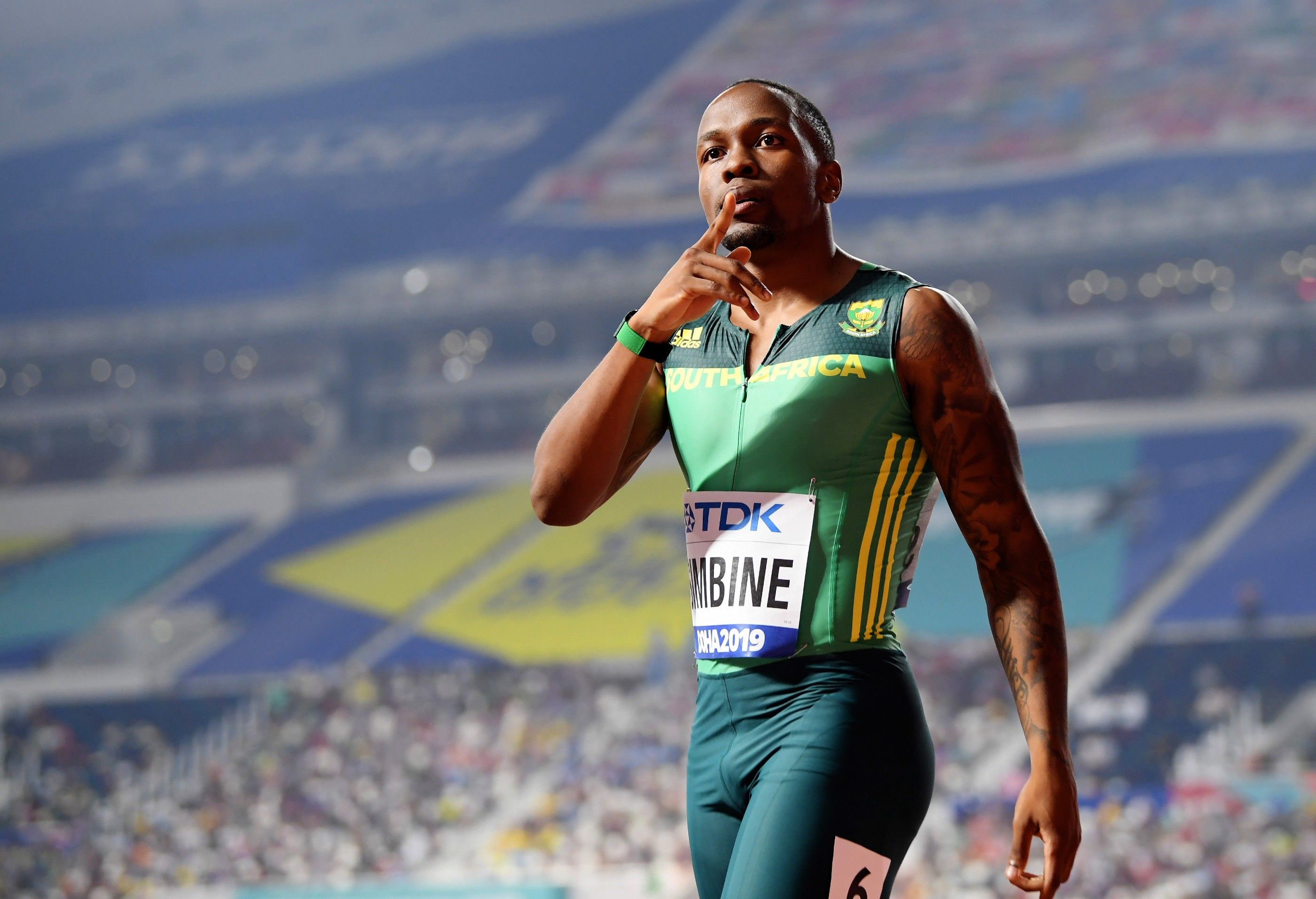 Few events in world sport captivate the public quite like the Olympic 100m final, and in the first edition in 17 years not featuring Usain Bolt, a new name will be catapulted to global fame at the start of August. Simbine knows that back home in South Africa, millions will be tuning in, hoping it can be him.

“I don’t take it as pressure, something that weighs me down,” he says. “I take it more as motivation and belief. A lot of people believe in me and what I can do for the country, what I can do on the track.”

It’s taken time to re-wire his thoughts like that. Back in 2016 Simbine went to his first Olympics in Rio but the dizzying lights of the five-ringed circus threatened to blind his focus. What did he learn from that experience?

“To keep my head,” he says. “Keep my head on my shoulders and not to stress too much or put myself in a corner, thinking I’m not free. When I’m running, I should be running free and relaxed and that’s the one thing I didn’t do in Rio.”

The intervening years have taught him the value of composure: how a loose muscle is a fast muscle, how a calm mind functions with superior clarity.

In his first race in Europe this year, Simbine was coolness personified, anchoring the South African men’s 4x100m team to victory at the World Athletics Relays Silesia 21, clocking 38.71 on a wintry, windy night in Chorzow, Poland.

How was the race for him?

“Cold, very cold,” he laughs. “But it was a great race, and I’m really happy for the team, for the boys, for the country. We came with the goal of winning and I’m just happy we got that.”

It had taken Simbine 30 hours, door to door, to make it to his hotel in Poland, and though South Africa was already qualified for the Olympics in the 4x100m he felt it was a trek worth making.

“It was very important to come out here, put together a good relay, get the baton across and make sure that we get the confidence knowing we are running at international competitions with high-quality countries,” he says. “We’re so used to running for ourselves and not a team but here, we work together, we plan together and we make sure everything goes well and we can all win together.”

At the 2019 World Championships in Doha, South Africa finished fifth in the 4x100m, clocking 37.73, and Simbine believes they can go a few places higher at the Olympics. “We’re hoping so,” he says. “For us this win is good for confidence; it’s so we are feeling good going into Tokyo.”

The road to this point has not been smooth.

While every athlete had their training disrupted to some degree over the past year, few felt it as severely as South Africans, who dealt with one of the world’s strictest lockdowns through much of 2020.

“At the beginning we thought, ‘okay, we’re going to get a week of serious lockdown then we can get back to training,’” he says. “A week went to three weeks which went to six weeks, eight weeks, and that’s you stuck inside at home, not being able to get to the track or gym.

“I was fortunate to get out of South Africa and race in the European season which was great to keep the legs going. It’s been tough and right now, it’s (still) tough. South Africa has been blocked off by a lot of countries so for us getting into Europe was a struggle, making sure our visas were approved, so it’s going to be a long journey to Tokyo and I’m hoping we can get over this really soon.” 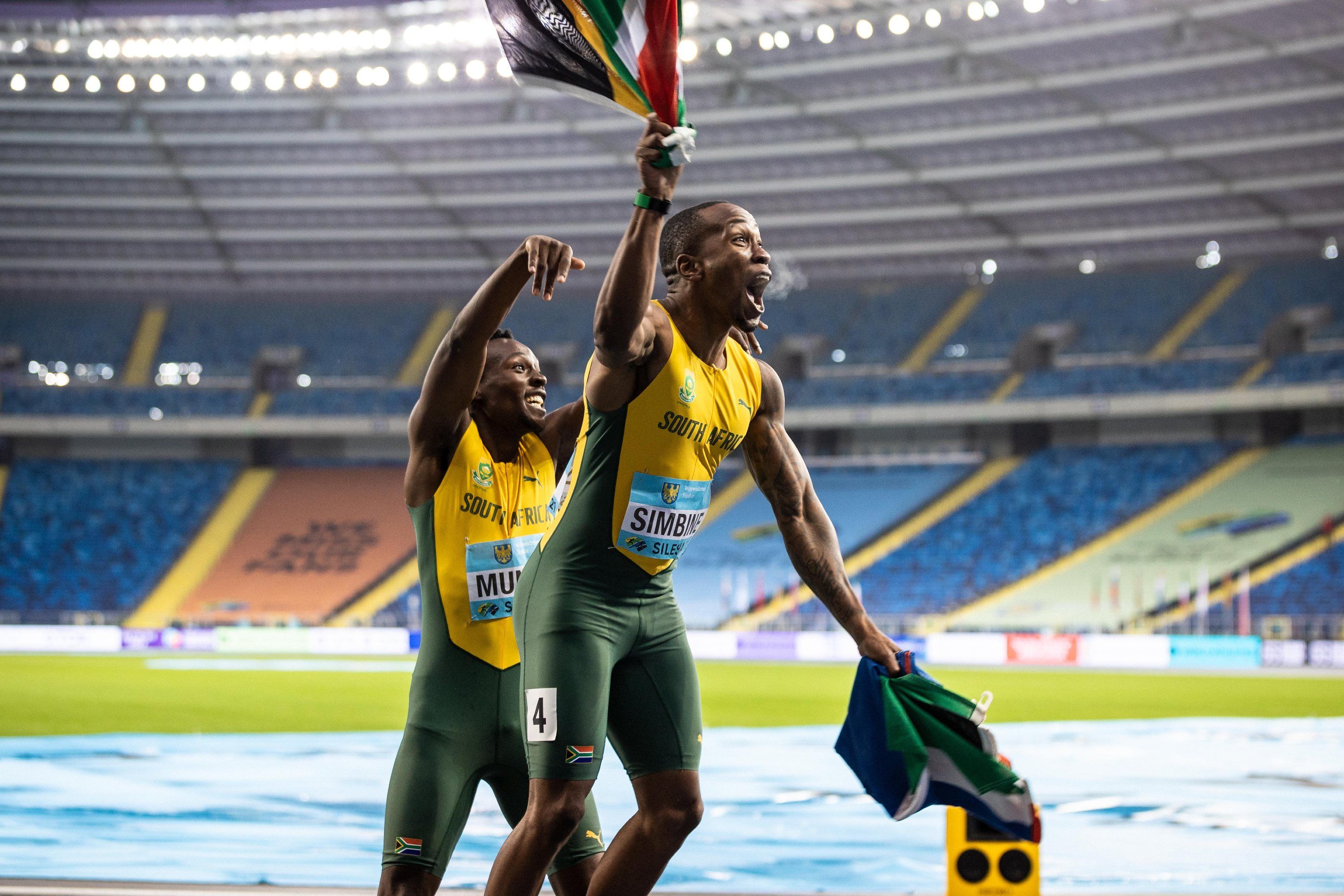 Simbine returned to Johannesburg following his Polish expedition and then relocated back to Italy where he will be based until the Olympics. He plans to try some 200m races early in the season to keep the door open for a sprint double in Tokyo. With 11 weeks until the Olympic 100m final, is there anything that still needs improving?

“There’s a lot,” he says. “The start, the middle of my running, the top end, the finish – the whole race. There’s a lot of things we need to fix and work on and that’s what’s exciting me even more, because I’m running well now and we’re not even at the point where we’re supposed to be.”

His wind-legal PB is the South African record of 9.89 he ran in Szekesfehervar a month before the 2016 Olympics, but Simbine knows that’s not his true limit, and he knows he has what it takes to become an Olympic medallist.

“I’m a 100m sprinter and if I don’t see myself being on a podium, then I shouldn’t be doing it,” he says. “I just need to make sure I’m able to get to Tokyo in the best shape I’ve ever been in and we’ll see what happens there.

“I’m really excited (with) the way I’ve started, but I’m keeping my head down and working. I have the confidence, I know what I can do and it’s just making sure I do it in Tokyo.”

It wouldn’t be the relays without a few thrills and spills and action on the second day of the World Athletics Relays Silesia 21 didn’t disappoint, with wins for Italy, Cuba, South Africa, hosts Poland, Germany and the Netherlands on Sunday (2).