The logo for these World Championships has also been launched today and will maintain the format of World Athletics Series events.

The main part of the logo features two important symbols of Riga: the rooster from the top of St. Peter’s Church, representing the right side of the Daugava River; and the spire of the National Library, representing the left side of the Daugava. The Championship courses will also visit both banks of the river, represented in the unifying of the two iconic symbols from each Daugava bank.

World Athletics Series event identities usually include the host city combined with the year. RIGA 23 has been modelled on the iconic RĪGA city border sign. In this form, RIGA 23 has already started its journey around the world’s classic marathons, with the aim of attracting a record number of marathon tourists to Riga in 2023. 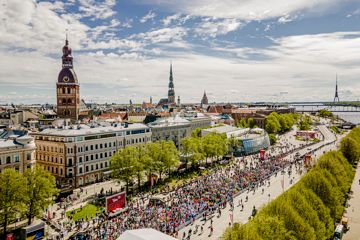