"I’m very proud. To have a Montenegran record, it’s good.

"I was ready to jump high, but I didn’t expect it because this is a very big competition. In the end, it was good."

It was an event of near escapes, though most of the field went relatively unscathed through 1.73m. The first failures began at 1.78m, where Vitobello of Italy and Kwasniewska of Poland came to grief; four more (Dronsfield of Sweden, Pejkovic of Australia, Lamb of New Zealand and Paul of France) washed out at 1.82m.

Elena Vallortigara of Italy was the first near escape. She was almost one of those eliminated at 1.82m, with two misses, but she cleared on her last chance and was over 1.86m on her first to put herself back in contention. 1.86m pushed out two more jumpers (Williams of the USA, Noorman of the Netherlands) and it was down to four.

At 1.89m, Belgium's Hanne Van Hessche, who had a clear slate until then, abruptly had three misses and was gone, in fourth. Lithuania's Airine Palsyte, who had two misses at 1.86m and passed her third jump up to 1.89m, cleared and was safe, the second near escape. Vukovic, whose only miss was at 1.86m, also cleared 1.89m at the first ask; Italy's Elena Vallortigara cleared on her second try.

Vukovic had a second miss when she took two attempts to clear 1.91m, but she was the only one of the three to clear that height. Palsyte took silver over Vallortigara on the strength of her earlier clearance of 1.89m.

Vukovic made three tries at 1.94m, but was unable to better that height.

1.91m is a Montenegran junior national record, but more importantly the first medal won by a Montenegran athlete in global competition, as the country only became independent of Serbia in 2006. 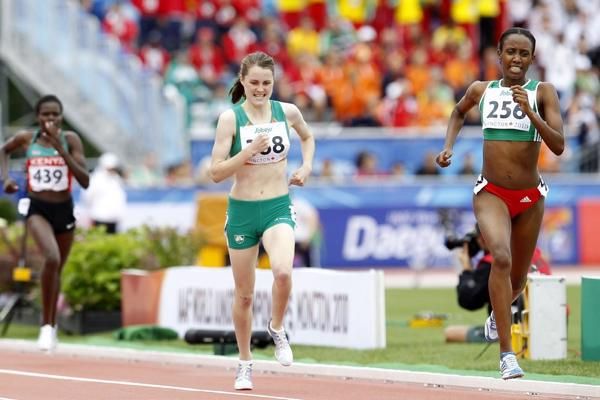