The Guadeloupe native clocked 12.99 at Hayward Field to confirm himself as the fastest junior hurdler in history. This past winter, he also broke the world junior indoor record in the 60m hurdles with 7.48.

“I can’t put into words what I am feeling now," he said. "It is an explosion of joy. We were tense during the warm-up and the start, but the tension disappeared when I learned I had broken the record. I’m now going to bring my season to an end.

“I did not know if I would break the 13-second barrier today because we did three races, one every day. Each time, I had to do my best. Today, the weather was good, I wanted to break the record and focused on it. I felt the Jamaican (silver medallist Tyler Mason) was getting closer as I started to hit the hurdles. I made some technical mistakes, but it is over,” he added.

At 19 years, he continued France’s successful hurdling tradition in the modern era that dates back to Guy Drut’s 1976 Olympic gold medal.

More recently Pascal Martinot-Lagarde clinched the silver medal at the 2014 IAAF World Indoor Championships and set a French record of 12.95 this summer.

“I know the rich history of the sprint hurdles in France and I want to follow their example,” said the native of Les Abymes, who joined Martinot-Lagarde as a 110m hurdles world junior winner. The latter took gold in 2010.

He moved up to become the European junior champion in the Italian town of Rieti last summer.

Belocian has become familiar with breaking records. In 2012, he set the still-standing world youth best with 13.12 and he was twice the holder of the European junior record prior to his world record run on Thursday.

“Since the bronze in Barcelona, we changed the training, the number of training sessions per week and the intensity," he said. "I would like to congratulate my coaches Rico Vaitilingon and Ketty Cham. They do a great job."

Reflecting on his world junior record performance, he said: “It is very special to know I am among the world’s best hurdlers. We have a long way to go, but it is impressive and a great reward for all the hard work we did.”

The European junior champion is looking forward to celebrating with his family and members of the Stade Lamentin club back home in Guadeloupe.

He took up athletics 13 years ago and later chose to specialise in the hurdles because: “I was intrigued by them.”

With his junior career having come to a close, the big question now is: how fast can he run when he joins the ranks of the big boys?

There is always a period of adjustment to the higher barriers in senior races but Belocian has already shown he should have little problem making the transition after setting a French junior record of 13.54 last month.

Martinot-Lagarde took barely a year before he was winning medals on the world stage as a senior, going from winning at the World Juniors in 2010 to taking the world indoor bronze medal in 2012.

It could be a trajectory also followed by Belocian. For now, though, he says: “I want to enjoy the moment and I would like to cheer on all my compatriots in Eugene as they did to me. This is my first competition in the US. I felt the vibe at the stadium. It is really beautiful here.” 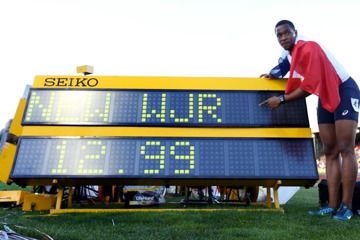 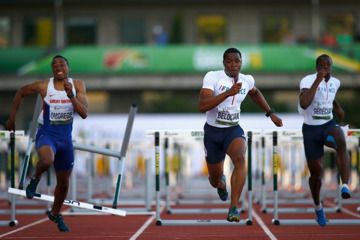