Konrad Bukowiecki has been breaking age-group records for fun, but none of his accomplishments thus far elicited such an emotional response as his world U20 record of 23.34m* in Bydgoszcz on Tuesday (19).

“I guess it’s because of my family being in the stands,” explained Bukowiecki, who is coached by his father Irenaeus. “I saw them for the first time before the competition and I didn’t expect so many of them would be at the competition. I lost my composure and I cried like a baby.”

A world U20 record and a second global title on home soil was a fitting way for Bukowiecki to sign off his championship career at U20 level but the Pole is already a proficient performer with the senior 7.26kg implement.

The teenager finished fourth at the IAAF World Indoor Championships Portland 2016 and at the European Championships, missing out on a medal by just one centimetre at the latter.

He is confident Randy Barnes’ long-standing world record of 23.12m is also within his capabilities.

“I think that if I can push the ball more than 23 meters [with the junior implement], in a few years I'll do the same thing with the heavier implement,” he said. “Of course, everything comes with time. For this you can’t aim too quickly but I see no obstacles to do it in the future and be the world record-holder in seniors.”

Bukowiecki has already surpassed the 21-metre line with the senior implement and a sobering prospect for his rivals is that athletics is not even his sole focus at the moment. Bukowiecki is on a sabbatical from his studies this summer, but in September he will begin at the Police Academy in Szczytno at the Department of Homeland Security.

The heir to Majewski

Poland has won the past two Olympic shot put titles courtesy of Tomasz Majewski, but with the reigning champion approaching the end of his career, Bukowiecki is destined to add another chapter to the country’s tradition which dates back to Wladyslaw Komar’s win at the 1972 Olympic Games in Munich.

Bukowiecki acknowledges that Michal Haratyk – who took the silver medal at the European Championships in Amsterdam – is the country’s top shot putter for now. And while the three best shot putters all train in different cities, he believes this domestic rivalry is pushing him to better results.

“We are helping each other, it’s good for the shot put in Poland; there’s such a high level at the moment,” said Bukowiecki. “During my first Diamond League in Oslo, Majewski was like a mentor to me.”

Bukowiecki was also quick to cite his role model after breaking the world U20 record on Tuesday. While proud of his achievement, the 19-year-old was by no means prepared to rest on his laurels.

“Like Majewski said after the Olympics, it is history. It’s good I have the world record but it’s over and there are new goals. The next one is the discus at the World Junior Championships,” said Bukowiecki, who is fourth on the 2016 world U20 list in the event.

“My focus is especially on the shot; the discus is more like fun for me,” he said. “If I do badly in the shot put, I can always go to the discus. It’s very similar – it’s quite like the shot put so I am happy I can compete here in Bydgoszcz in the discus so maybe I can get through to another final.”

After Bydgoszcz, Bukowiecki will get ready for his first Olympics but even after the Games, the Pole still has some competitions in the diary, including one more contest with the junior implement.

“I will do another competition in Spain in September – the European Champion Clubs Cup in Castellon,” he said. “It will be my last competition with the 6kg ball and the end of my season.”

And what a season it has been. 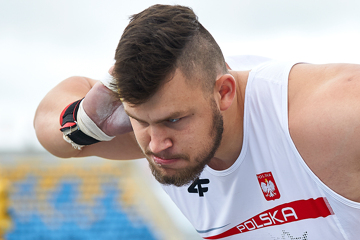