Michael Norman is what in the USA they might call 'a phenom'.

The 18-year-old has only just graduated from high school but he is already being touted as one of the hottest commodities on the US sprinting scene.

He was named Gatorade National Track Athlete of the Year – a prestigious accolade bestowed to standout high school athletes – for the second year running and institutions across the country have been lining up to recruit him as he embarks on his collegiate career.

Carl Lewis even paid Norman a home visit to try to coerce him over to the University of Houston, but the San Diego-born sprinter has chosen to stay closer to home. He will train and study at the University of Southern California in the sunny climes of Los Angeles starting from next month.

“I’m going into communications in pursuit of becoming a sports broadcaster,” said Norman. “I want to stay connected within the sport if I were not to go professional or even after my professional career.”

Turning professional is in the plan but while some of his peers have eschewed the traditional collegiate route, Norman has no immediate plans to follow suit.

“I have intentions on going pro," he said. "I don’t know when that opportunity will come up, but as of right now I’m going to college."

Taking it step by step

The pressure to turn professional might have increased had Norman claimed a place on the US Olympic team over 200m earlier this month.

He won his heat in a wind-aided 20.06 and his semifinal against a strong headwind in 20.21, but after a long and arduous high school season in which he juggled both the 200m and 400m, Norman wound up fifth in the final despite a lifetime best of 20.14.

There was some initial disappointment but his team has the bigger picture in mind.

“I would have been mentally ready for it (if he had made the Rio-bound team) but coach and I like to take things one step at a time so we go from meet to meet.

“Now that I’ve finished my high school career, I can focus on my college career and after I go through my first year, I’ll start focusing on maybe trying out for the world team and continue taking it step by step until four years have passed by and the next US Olympic Trials come up.”

The experience of running multiple races in such a high-pressure environment will prove invaluable in the long term. He posted a fast time at the US Junior Championships but he wasn’t expected to acquit himself so well against one of the toughest fields of the Trials.

He even surpassed his own expectations.

“I honestly didn’t think I was going to make it that far in the 200m,” said Norman, who also contested the 400m in Eugene. "Having the outcome of getting fifth and setting a PR is just an amazing experience; I learnt a lot from running the rounds.

“First I was a little bitter but I didn’t have anything left. I couldn’t challenge coming off the turn but it was definitely a lot of fun and I feel accomplished. It was one of the highlights of my season.”

From Eugene to Bydgoszcz

Another highlight was his double triumph at the IAAF World U20 Championships Bydgoszcz 2016.

Norman described the turnaround after the US Olympic Trials as “extremely hectic” but an intense fortnight of racing and travelling was worth it as Norman came back home from Poland with two gold medals for posterity.

“Competing for the USA brings a lot of pride, especially when you do perform well. I’ve really enjoyed my experience so far," said Norman in the Polish city.

He might have been racing on tired legs but the results certainly don’t reflect this.

After holding back in the heats and semifinals, Norman blitzed the bend in the final to claim victory in the 200m in a championship record of 20.17 – the third fastest time of his career – before running the first leg for the gold medal-winning 4x100m team.

“My international experience here has been amazing and what I’ve learnt here, I’ll definitely apply to future teams.

“In terms of food, sometimes it’s not always the best so maybe you need to bring some snacks from home in case you’re missing something or you’re going to be gone for a long time. Prepare for everything!”

Norman drew a line under his season after Bydgoszcz and he will spend some time at home where he will indulge in some skateboarding before the start of classes at USC next month, where he will be coached by Caryl Smith Gilbert and 1992 Olympic 400m champion Quincy Watts.

Norman’s specialist event will almost certainly be the 200m but he can also boast lifetime bests of 10.27 for 100m and 45.19 for 400m. The next few years should tell him what sort of sprinter he will develop into.

“Even Carl Lewis said he thinks I’m more of a 100m/200m guy but we’ll just have to see how I’ll progress through college to see whether the 100m or 400m is more my event. It’s more like a trial and error type thing. I’ll be doing both events and see which one I’m best at and once I’ll find out, I’ll start focusing on that specific event but I’ll always do the 200m.”

Gilbert’s most famous protege is arguably Andre de Grasse, who won a scintillating sprint double at the NCAA Championships last year – 9.75 and 19.58, both wind-aided – before turning professional and taking a 100m bronze medal at the IAAF World Championships Beijing 2015.

Norman might not be thinking about that but he is excited about the scope for improvement under this brilliant coaching duo.

His full potential might not become apparent overnight. Norman doesn’t think he will reach his prime until 2024 when he will be “more developed, more of a man”. But if his high school career is anything to go by, the USA might have the next great all-round sprinter in the making. 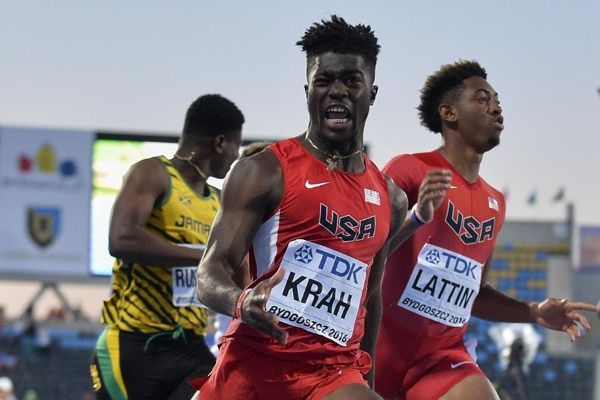 Krah sets out to follow in Merritt and Johnson’s footsteps

Entering a competition as a favourite is one thing, but leaving with the title of world champion is another. Just ask Marcus Krah, who admirably shouldered that pressure en route to a convincing victory in the 110m hurdles at the IAAF World U20 Championships Bydgoszcz 2016.