London 2012 Olympic Games 110m Hurdles gold medallist and World record holder Aries Merritt is a new addition to stable of IAAF diarists and has put his fingers on the keyboard.

“This is my first ever diary entry for the IAAF. I'm excited about sharing my updates with track fans around the world but I've been wondering about where I should begin so here goes…

“From the time I was a kid, and my high school track coach saw me jump a fence and pushed me to try the hurdles, I enjoyed the challenges that come and the rhythm needed for the hurdles.

“And in the seasons leading up to 2012, I knew, OK maybe I really didn't know, but at least I thought I had a chance to breakthrough if I could get past the injuries and setbacks that kept creeping up during my most crucial training and racing times.

“Sub-13?  Yeah, I was sure, I could get there. An Olympic gold?  Perhaps, if I stayed healthy and mastered my move from eight steps to seven steps to the first hurdle and, of course, if I made it through the US Trials.

“A World Record?  That would be tough but never say never.

“So I am back at it and as motivated as ever.  During some of my frustrating years, I would spend my free time away from the hurdles, and away from thinking about training and competition.

“Now, after training, I sit and doodle on pieces of paper thinking through technique and trying to figure out where I can make improvements over 2012. There is never a perfect race, there is always something that can be improved.

“The last few weeks have been a time of transition for me.  I am transitioning from indoor hurdles training to outdoors. For me, I spend much of the winter working on quickness and power out of the blocks over a small number of hurdles.  Now, as I prepare for outdoors, I am working on extending that power over a full set of 10 hurdles.

“The outdoor high hurdles are about consistency and rhythm, and not just power and speed like indoors.  Speaking of speed, the other area of transition for me is to adjust to the performance shoes of my new sponsor, Nike.   I am excited to be part of a team of people who have supported many other great and consistent hurdlers like Allen Johnson and Liu Xiang.

“I'm still fine tuning my racing schedule. My racing plans will be built around preparations for the US Trials and, hopefully, the IAAF World Championships in Moscow.  I've never been to Russia but hope to see it this summer.  I also plan to race in Samsung Diamond League during the spring and summer.

“In the meantime, I will try and keep some of my free time occupied with other relaxing things. Video games which are my other passion: Star Wars -  The Old Republic, and World of Warcraft are how I roll these days.” 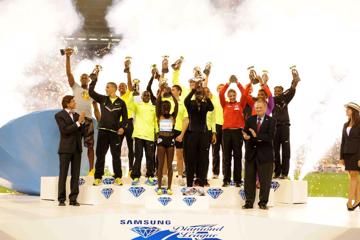 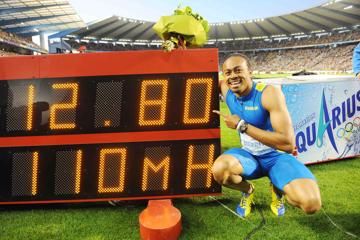