Four-time World Long Jump champion Dwight Phillips was forced to skip the 2012 season after being injured in a car accident, but the 35-year-old has now recovered and is getting ready to open his 2013 campaign ahead of his World title defence in Moscow later this summer.

“I’m happy to be back sharing my diary on the IAAF website and I’m really excited to be back, ready to compete in the Long Jump.

“Right now I am in pretty good shape. I am back to 100%. My first competition will be the IAAF Diamond League meet in Shanghai on 18 May. I’m healthy and I want to be able to go after another World Championship gold medal this year. That is my goal. I want to be the first American to win five World Championships in an individual event.

“Last year was very difficult for me. It was definitely a roller coaster because I had won every global event in the previous years, including the 2009 and 2011 World Championships. I wanted to win another Olympics. I was Olympic gold medallist in 2004 but I was injured in 2008 and couldn’t defend my title in Beijing. So I wanted to come back in 2012 and leave a stamp on my legacy. I wasn’t able to do it because first I had a car accident then I ruptured my achilles.

“The car accident shook me up. I was in traffic in Atlanta and the driver in the car behind me was on the telephone and not paying attention. They hit me pretty hard. They weren’t going too fast luckily but I had back pain for quite a while. Then I had the achilles problem.

“I had been battling with injuries to my achilles since 2000. When you compete at a high level there’s lots of wear and tear on your body and then it just gave out on me. It was the achilles injury that actually took me out of the Olympics.

“I am not nervous about competing in Shanghai, I am more excited. Last year watching the Olympic Long Jump final, it was cool because Greg Rutherford is a good guy and he earned it. But at the same time I felt like, with me competing there, I don’t know, I think it might have been a different outcome, personally.

“I don’t think there are a lot of coaches who know how to coach the Long Jump. I also think that some athletes aren’t competing in their right event. I thought I was a 400m runner when I was in college and my coach Edrick Floreal (Canadian Triple Jump record-holder) told me on my second day of training that I could be an Olympic gold medallist in the Long Jump.

“Of course, I didn’t believe him. I wanted to run the 400m. I think a lot of athletes aren’t jumping maybe because they don't think it’s appealing. But it’s definitely a great event.

“I am always motivated by being a part of history. I know it’s going to be a hard road, because there are a lot of good athletes and they are motivated to have that top spot because last year was relatively weak in comparison to other years.

“Right now after Shanghai I will be competing at the Prefontaine Classic then the US Nationals and from there I am not sure yet. But I want to win another World Championships.” 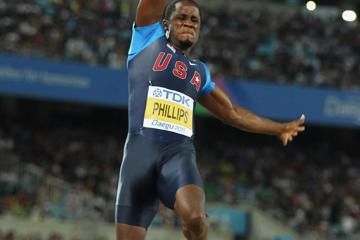 Phillips ‘can't wait to go out and start comp...