A winning Bett in the 400m hurdles

When the gun fired for the men’s 400m hurdles final in the Bird’s Nest stadium on Tuesday night, Nicholas Bett knew exactly what he needed to do if he was to overcome the odds – and accepted wisdom – to claim Kenya’s first ever global medal in the event.

“I decided to run much faster through the first 300 metres,” he said, “so if there was any strong runner beside me, we would fight to the end.”

Running in lane nine, Bett was aware that he would have to blast the first 200 metres or so to give himself a chance against a field so evenly matched that six athletes turned into the home straight within a metre of each other.

The 23-year-old policeman fumbled his stride pattern when running within himself in the semi-final and Bett made sure no such problems occurred in the final.

“In the semis I missed my steps at the fourth and seventh hurdle,” he reflected, “so in the final I had a very strong start and decided to go full blast so I don’t miss any steps and rely on the strength of my legs. I tested the first 100 and then I opened up.”

Bett turned into the home straight a metre down on the eventual silver medallist Denis Kudryavtsev, but it was then that he opened up his gargantuan stride and powered past the Russian as they cleared the final barrier.

At the finish, which he reached in a national record of 47.79, taking 0.44 off a mark which had stood for 22 years, Bett was still moving clear.

His teammate, Boniface Tumuti, finished fifth in 48.33, proof – if it was needed – that there is a whole lot more to Kenyans than middle and long-distance running.

For many years, people have tried to explain their success in distance events, but last night the world of athletics was left wondering how a country with such basic facilities has produced two of the best in an event that requires speed, power, technique – and yes, endurance – in equal measure.

“These guys are like machines,” says Jukka Harkonen, Bett’s athlete representative, who was one of the first to recognise his vast talent. “He’s like a super machine. I’ve been following his training, and my feeling right now is he could run 1:43 for 800m.”

Back in his schooldays, Bett was not an athlete, but a volleyball player, a sport he feels helped prepare him for his future exploits.

When he first took up athletics, he was acutely aware of the flood of talent among the distance events in Kenya, so gravitated towards an event that he felt he had a better chance of success: the 110m hurdles.

Bett was good, but not great, and despite sticking it out for a number of years, he soon realised he would never become world class, or defeat the pure-bred speedsters he came up against in the sprint hurdles, so in 2009 he moved up in distance.

“After a while, I decided there is no way I am going with this race,” he said. “Once the gun goes and you are left behind, it’s gone, so I decided to move to the 400m hurdles. At least in that event I knew I would have a second chance. If you do badly in the first 200m, you can come back.”

In the years that followed, Bett coached himself and improved from a 53-second runner into a 49-second man. At the Commonwealth Games in Glasgow last summer, he was knocked out in the heat, running a sluggish 51.21, but his raw ability caught the eye of several coaches.

One of those, South African coach Hennie Kotze, who coached many top 400m hurdlers such as Beijing semi-finallist LJ Van Zyl, saw huge potential in Bett and together with Harkonen, he began to implement the changes that would transform the Kenyan into a world-beater, coaching him mostly via the internet.

“Technically, we changed two things,” says Harkonen. “I changed his position from the blocks so he was getting to the first hurdler quicker. When he was running before, he would run 13 (strides) for the first three hurdles, then 14 and 15 after, but in Kenyan trials this year, he ran 13 all the way through.”

When Bett stormed to victory in 48.29 in Nairobi earlier this month, they knew the formula was working, and though Harkonen was still surprised by how fast Bett ran last night, he wasn’t shocked by him winning gold.

“The time was absolutely a big surprise,” he said, “but when you think about it, (a Kenyan winning this event) is very possible. They are super athletes.”

Bett, meanwhile, was thrilled – if a little surprised – with his gold medal, and dedicated his performance to his twins back home.

“There were a lot of strong runners in the field beside me, but I pushed hard and ran to the end,” he said. “I was not expecting to be a gold medallist.”

Not many saw it coming and who knows, maybe Bett’s victory will now open the floodgates for a new stream of Kenyan talent trying their hand at the 400m hurdles.

BACK
Pages related to this articleAthletes
Nicholas BETT 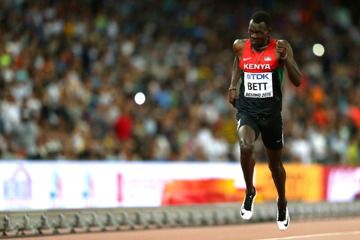