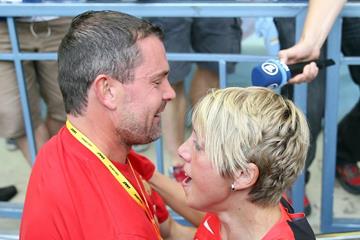 From bridesmaid to bride for Obergfoll

After being the runner up on so many occasions at big championships in the past, German Javelin thrower Christina Obergfoll finally clinched victory.

From bridesmaid to bride, a phrase even more apt as next month she marries her boyfriend Boris Henry.

There’s no better sight than watching an athlete realise their lifetime dream.

As Obergfoll embraced her fiancé, the two-time World Championships bronze medallist in the men’s Javelin, you could feel the joy; and sense the relief.

Yelena Isinbayeva aside, it was probably the feel-good moment of these IAAF World Championships.

After being the silver medallist at two previous World Championships, two European Championships and winning silver and bronze at the past two Olympic Games, Obergfoll had carried a reputation as a runner-up, not a winner.

The popular German finally claimed a World title in the Javelin with a booming second-round throw of 69.05m.

It was a season’s best and enough to secure the elusive gold medal ahead of Australia’s surprise packet Kim Mickle and home favourite defending champion Maria Abakumova, who took the silver and bronze respectively.

Despite Abakumova leading the 2013 world list, Obergfoll was the favourite for the title having won seven of her eight competitions, including a comprehensive win in the IAAF Diamond Race after victories in New York, Eugene, Rome, Paris and London.

At the past four World Championships, she has finished second twice in 2005 and 2007, fifth in 2009 and fourth in 2011. At the Olympics last year, she was again runner-up to add to her bronze from 2008 and she was second at the past two editions of the European Championships.

Such a beautiful moment

After so many near misses, Obergfoll was overcome with the emotion following the win, but she was still able to express her deep satisfaction with the victory which she feared would never come.

“Finally. It’s such as beautiful moment,” she said after the medal ceremony, with the glittering gold medal still hanging around her neck.

“All these years I’ve always had good results, but I’ve never had such a good throw and I’ve waited for what is so long.”

“Fourth in Daegu was the saddest moment of my career, and finally in the year where I didn’t really expect it, it finally happened.”

“I’ve always had to take disappointments so I try again; fight again and there was some moments when I really thought about ending up my career.

“After London, last year, I said ok, after the silver medal I‘ve reached so much and if it may happen then it may happen sometime, but it doesn’t have to happen anymore, and then finally this moment came true.”

It’s all in the mind

The 31-year-old has done a lot of work on the mind games of Javelin throwing.

In an event that sometimes seems more hit or miss than just about any other in athletics, get it right and the spear flies, and flies and flies. Hit it wrong and it wobbles to earth much sooner that expected.

Obergfoll has spent many hours with sports psychologist Hans Eberspacher, who has encouraged her to relax and not take things so seriously.

Since Daegu, the partnership has produced an Olympic silver medal and now the World Championships gold.

“The belief is I can throw far and I don’t care about what the others are doing.”

Like many here in Moscow, Rio is on her mind, but first the new World champion has a ceremony of a different kind to prepare for.

She will marry fiancé Boris Henry in September and a family is on the agenda at some point.

“I can’t tell you tonight when I will take this pause,” she admitted.

“I’m looking forward to Zurich and the Europeans (the European Championships next year) because it’s such a nice atmosphere there, a nice stadium.

“But for sure I will be there in Rio.”

With that, she left the stadium to continue the celebrations, perhaps the most satisfied of all the winners this week in Moscow.