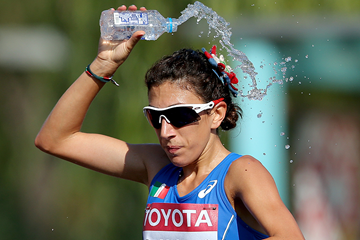 Going into the IAAF World Championships Beijing 2015, Antonella Palmisano wasn’t even expected to be the highest Italian finisher in her event. But she left the Chinese capital as the top-performing woman on her national team.

Based on season’s bests and personal bests, Palmisano was the slowest of Italy’s three women entered for the 20km race walk in Beijing. She had also battled injury problems throughout the year, meaning she went into the race having not competed for five months.

But following the disqualification of teammates Eleonora Giorgi and Elisa Rigaudo – who, up until their red cards, had been in medal contention – Palmisano came away from the World Championships with a surprise fifth-place finish, the closest any Italian woman got to a medal in any event in Beijing.

“The fifth place in Beijing was like a medal for me after the injury in the build-up to the World Championships which prevented me from training properly,” said Palmisano.

The 24-year-old’s only other race outdoors in 2015 was at the IAAF Race Walking Challenge meeting in Dudince, where she finished third in 1:28:40, despite carrying a hamstring injury.

“I got the injury in February but I decided to compete in Dudince,” she said. “Despite the problem, I managed to clock 1:28 without forcing the pace, but the doctors at the Italian federation suggested that I shouldn’t take part in the European Cup.”

She skipped the European Cup Race Walking in Murcia in May so that she would be ready to compete at the World Championships. But 20 days before travelling to Beijing, disaster struck again. Palmisano sustained an injury to her right tibialis muscle, hampering her final preparations for the event.

“I decided not to give up and to try to give my best, especially after all the work I did to prepare for the World Championships,” she said. “The build-up to the race was very hard as I spent more time with the physiotherapist than with my training partners.

“During the race it was very painful but my coach Patrizio Percesepe encouraged me along the course. He told me that I had to believe in myself. I cried when I crossed the finish line because I could not believe that I had finished fifth.

“I was happy with my race but I was really sorry for Elisa Rigaudo and Eleonora Giorgi, who were disqualified in the final stages of the race,” she added. “Elisa is my training partner and I know how hard she worked to be ready for Beijing. She was also my roommate in Beijing and gave me a lot of support and encouragement during a difficult season. I have learnt a lot from training with Elisa.”

Rigaudo, the 2008 Olympic bronze medallist, is one of a number of successful Italian race walkers who have paved the way for Palmisano.

National record-holder Eleonora Giorgi, double European medallist Erica Alfridi, 1996 Olympic silver medallist Elisabetta Perrone, and the late Annarita Sidoti, the 1997 world champion, have all contributed to Italy’s athletics success over the past three decades. Palmisano could be the country’s next major championships medallist.

Born in 1991 in Mottola in the Southern Italian region of Puglia, Palmisano’s first taste of sports came in volleyball, a sport her mother Maria used to play. But Palmisano gave it up in 2003 to focus on athletics, starting out with middle-distance running.

Tommaso Gentile, a passionate race-walking coach and president of the local athletics club Atletica Don Milani, spotted Palmisano during a school competition in 2006 and suggested she joined his training group, which also included the likes of 2010 Youth Olympic champion Anna Clemente. Palmisano won her first national race-walking title in 2006 and it soon became her passion.

“I have a good memory of the period when I was trained by Tommaso Gentile,” said Palmisano, whose younger brother Michele also trained in this group and went on to win the Italian under-15 title in 2009. “Tommaso is not just a coach, but a master of life. Although I have since moved to a different club in Rome, I have kept in touch with Gentile and my old training group.”

At the 2007 IAAF World Youth Championships in Ostrava, her first international competition, Palmisano finished fifth in the 5000m race walk in a national youth record of 22:58.52. But her big breakthrough came in 2009 when she finished third in the junior race at the European Cup Race Walking and second at the European Junior Championships.

Her progress continued and in 2010 she won the junior women’s title at the IAAF World Race Walking Cup in Chihuahua. Until that point, only two other Italian athletes had won gold medals at that event: Abdon Pamich in 1961 and Erica Alfridi in 2002.

“Before the race Tommaso was very confident that I could win, as he felt that I was in very good form,” she said. “My best memory is the crowd who gave me lots of support along the course. This gave me extra energy.”

Palmisano moved to Rome in 2012 to be coached by the Fiamme Gialle coach Patrizio Percesepe. The following year she took bronze at the European Under-23 Championships in a big PB of 1:30:59 to qualify for her first IAAF World Championships. She went on to finish 13th in Moscow, taking another nine seconds off her PB.

“I was happy with this unexpected medal in Tampere as I set a personal best on a difficult course,” she said. “In 2011 I received the European under-23 silver medal only after two athletes had received a doping ban. But in Tampere I received the medal on the podium and I was able to enjoy the moment. This medal marked an important step in my career.”

She improved again in 2014, setting a big PB of 1:27:51 when finishing ninth at the IAAF World Race Walking Cup, and later finished seventh at the European Championships.

Given her progress in the preceding years, Palmisano can only wonder what 2015 may have had in store had it not been for the injuries. Nevertheless, her performance in Beijing has given Palmisano the self-belief that she could be a medal contender at the Rio 2016 Olympic Games and, more imminently, at the IAAF World Race Walking Team Championships, which will be held on home soil after the event was recently awarded to Rome.

The event will be staged on a scenic course in the historic centre of the Eternal City. It will be the fourth time that Italy has hosted the event, having staged it in Varese in 1963, Pescara in 1965 and Turin 2002.

With the likes of Palmisano, Rigaudo and Giorgi set to compete, Italy’s women’s team will be among the main contenders in both the team and individual contests.

“The news that Rome will stage the World Race Walking Team Championships really surprised me, said Palmisano, who has been training in Ostia, near Rome. “It will be a great honour to represent Italy in such a big event at home in the city where I am now training.

“The recovery from the injury I had last summer was slow and I will start training seriously only at the end of January,” added Palmisano, whose first competition of 2016 will be over 20km at the Italian Race Walking Championships in Cassino on 20 March. “Rome will be a stepping stone to the Olympic Games.”

And in Rio, unlike in Beijing, it may not be such a surprise if Palmisano is once again the top Italian finisher.